BEFORETIMES. Uranus culls his gilded camels and bathes in the Baikal, the Zaysan, the Lanao. He wades in low-lying plains, spas in every rain-filled meteor crater. Sixty-fourth parallel, March. Sunlight fires a salvo off his lover’s collarbone. Gaia’s slums hoard water, Asmat mud and patches of pubic forest. Her valleys are aqueducts feeding antechambers of lakes: caravans of bathtubs clawing overland talon by talon according to deep time, glacial wake, geochemistry. Lake Agassiz Basin, Morass hollow, calderas. Gathering my hair off the pillow, I rise from the spill on our sheets to bathe. Oceanus – Titan of the brutish Atlantic, master of Ketos and Kraken, conductor of sky to land. Half-man, half-serpent; horizon marks the fix. Biceps of accumulated cloud ceiling the sea. He’ll rip your ship apart for a violin. His tail’s a woman’s braid dropped deep. And over its mucus and muscled carbuncles, legions of mollusk princes ascend, knot by knot by octopus tapas – crabs’ pincers and half-spumed clams – through bergs of cloying oil slick, plagues of dross, black-booming purple and a drowned Cassiopeia of phosphor. Abyssss. Germs fermenting in the kegs of their slow-moving shells. Up through the punch-holes of Poseidon’s belt, out through the tunnels of his prosthetic manifold, svelte pipelines, immaculate taps – an invertebrate army comes to kiss the slit where my tail splits, two legs.

Ottawa poet, critic and dog walker Brecken Hancock’s first trade poetry collection, Broom Broom (Toronto ON: Coach House Books, 2014), explores the depth and darkness of death, loss and disappearance, as well as a history of plumbing, all while attempting to come to terms with her mother’s extended years of illness and recent death. Hancock strolls her poems through sing-song cadences and performs a wild linguistic gymnastics across both a comfortable domesticity and an unsettled history, and yet, this entire collection is unsettled, attempting repeatedly to discover and gain precise footing. As she said recently in her “Poets in Profile” interview over at Open Book: Ontario: “I’m invested in the tension between façade and confession, bravado and vulnerability. My poems are one way that I hold a mirror up to my bad parts, and I think poetry offers a potent means for exposing an internal landscape that’s not available narratively.” Compare the poem “BRECKEN” at the beginning of the collection to the poem “EVIL BRECKEN” towards the end (published recently at Hazlitt):

Booze tides me.
TV abides me.

My tits slung
astride me,

I noose quiet
to lie with me.

My other husband’s
a broom. 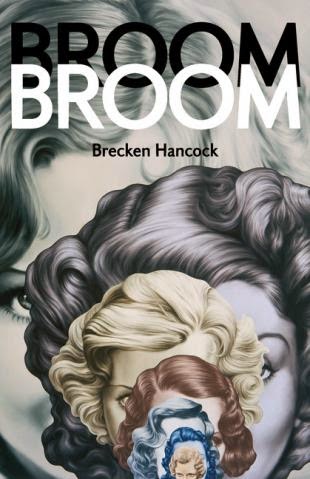 The sibling poems, situated at either end of the collection, show the ways in which Hancock explores and plays with the self, with unanswerable questions and uncertainties, and the mirror held up to the tensions she spoke of “between façade and confession, bravado and vulnerability[.]” Utilizing poems throughout that explore plumbing back to the Greeks, it allows her the distraction, perhaps, to write what is really the focus of the collection: the loss of her mother and the nature of the self through memory, and a rage both sharp and worn; a rage at times so fierce it can’t help but catch in the throat. As she writes in the poem “HUSHA”: “Some animals eat their young. / Animals sweet on their young.” Another poem, “WOMAN, WOLF,” ends with the direction: “Love, you’re the kind of cur / that gnaws the buttons off his coat / and drinks and drinks to blur the raw.” When it appears, the rage is sharp, directed and pointed, and comes with a remarkable clarity. The poem “THE CRIME FOR WHICH HE’S SERVING LIFE” includes: “This poem, his prom. I grew up with a boy // who grew into a murderer and I loved him. Love him // on the far side of the object of love, // the him beyond him. For words there are no // larger words.” One of the most striking pieces in the collection is the extended poem “THE ART OF PLUMBING” (an earlier version of which appeared as a chapbook through above/ground press), comprised of an accumulation of short prose poems progressing from 3300 BCE to 2014 CE. The history of plumbing, again, centres here, and allows Hancock to distract against what the focus might actually be. Two sections from different points of the piece read:

1348 CE: Forty-five percent of Europe’s population succumbs to the Black Death. Bathing, thought to transmit disease through the pores of the body, begins to decline as common practice. One hundred and fifty years later, Queen Isabella of Castile boasts at having bathed only twice in her lifetime: once at birth and once on her wedding day.

2014 CE: I need to soak. Gathering my split hair from the pillow, I rise from the television news, from the navalia proelia on our sheets. Grief isn’t an epoch; it’s a milieu. In the tub, Mom’s waiting, water slipping through the noose at its bottom. Tuberous teats in the faucet’s bulb. One damp hand fixed to the hot faucet; fingernails chewn, skin leavened at the quick. It’s not quick; the earth turns round on its spit.

In her essay “Forensic Confession,” composed as a companion to “ONCE MORE” (published in the ninth issue of seventeen seconds: a journal of poetry and poetics), Hancock writes about the complications of “confession” against the emotional complications of attempting to reconcile her mother through her writing. She writes, “This poem isn’t making me feel better. It’s no time travel.” She writes:

Ah, my mother’s deathbed. Now we’ve come to the nub of my obsession, my compulsion to confess. For as long as I’ve been writing, I’ve been writing about my mother. Mom contracted front-temporal dementia when she was forty-three years old and I was eighteen. The timeline is rather muddy because she was misdiagnoses over and over again, the medical establishment considering her too young to test for dementia. […] By considering forensics in creating my own work, I’ve been able to think about rhyme, rhythm, metre, formal structure, word choice, image, and metaphor as reconstructive tools for piecing together the case of my mother’s death and my culpability. As I said, the timeline is muddy. I scour the trail, back and forth, attempting to see things from an objective, scientific perspective, looking for the clue that will click the pieces into place. I consider my mother’s decline and death again and again from different angles, like an investigator pinning disparate photographs and pieces of evidence to the wall. Taken together, poems form the picture of what I know: the crime scene. I try my mother in the role of perpetrator, then exonerate her as victim. See myself as prey; try myself as criminal.

Broom Broom is very much a book about Hancock’s mother, composed as the thread that can’t help but run through the entirety of its pages. Broom Broom is a powerful first poetry collection that exists as both an exploration of a dark history and subsequent grief, as well as an opening into a comprehension of what might remain, and a possible freedom from that same grief. Still, the book isn’t one burdened or weighed down with any such overwhelmingly serious tone; one can’t deny the playfulness of her writing, even through poems composed to cut down to the bone, such as:

LIFE’S A CYCLE OF HAIRSTYLES

Husband leaves me.
I swill another.

Sandy leaves me.
You only get one another.

Why wasn’t Mommy
a better lover?

Over the space of some seventy pages, its as though the subject of her mother circles throughout Broom Broom, circling ever tighter as one moves past the first few pages, becoming featured in a poem such as “THE ART OF PLUMBING,” finally to emerge as the focus in the second last poem, “ONCE MORE.” Reminiscent of the prose of Susan Howe’s That This (2010) that wrote of the death of her husband, Hancock’s penultimate poem includes:

Mom would stand in her pyjamas and green, knee-length insulated coat, puffing without remembering how to inhale. Hair forcibly washed, stringy, scraggly, broomstraw. Face: wet-bread white. Disconnected from language, from subjectivity, she still ached for home. She forgot her name, forgot her pronoun: adopted the neuter ‘it.’

It asks my brother over and over to break it out:

‘Take it. Take it to where you have your life.’

Before the disease rendered it completely dumb, it was abusive. Exiling me from home, it forbade me from visiting and told me repeatedly that it hated me. It chased my dad with a knife and would sometimes turn on the car in the garage – make him watch while it knelt at the tailpipe, purposely sucking in exhaust.