What if we stopped predicting the weather
and agreed to run it ragged?

To demonstrate: a dramatization
of a pigeon being hit by a car, except in this

everyone is having a night in their lives.
Most people are now experts on design.

I’m pretty sure this guy I know is faking
imposter syndrome. But don’t we all

just want to stand, mostly upright,
in a stick figure forest of contemporaries?

At the very least, I’d like to make a name
for myself in the lost art of skywriting.

I was going to say something crucial.
But I forget what. 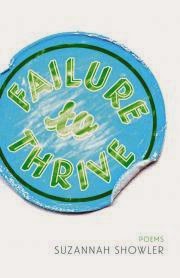 Toronto poet Suzannah Showler’s [see my recent Open Book: Ontario profile on her here] highly-anticipated first trade poetry collection is Failure to Thrive (Toronto ON: ECW Press, 2014), a collection of taut, polished and punchy lyrics. A finalist for the 2013 RBC Bronwen Wallace Award for Emerging Writers from the Writers’ Trust of Canada, Showler was included in The Walrus’ list of “the six best writers you’ve never heard of,” and, last spring, she released her first chapbook Sucks To Be You and other true taunts with Bardia Sinaee’s Odourless Press. Structured in five sections—Sensory Anchors, Museum Mouth, What You See Is What You Get, Some Crucial Element and Keen Frequencies—there is a precision to the poems in Failure to Thrive that one doesn’t often see in a first trade collection, and even her more conversational pieces are composed of cut and carved lines so tight that one could bounce a quarter off them. “Lowest was Jean’s preternatural warble, / spate of notes carrying a regatta of old-world curses / that strained, wood-stained, to reach us.” she writes, to open “THE WINDSOR ASYLUM” Her poems are culturally astute, highly aware of the margins and capable of intriguing cognitive twists, and establishing connections that didn’t previously exist. “The Great Wall of China / isn’t visible / from space.” she writes, in the poem “A SHORT HISTORY OF THE VISIBLE,” later writing:

Body scanners once used only in airports
become popular in bars.

This is what you see:
clothes haunting skin haunting
muscle haunting bone.

What you see is what you get.

When Showler opens the first poem in the sequence “SUCKS TO BE YOU AND OTHER TRUE TAUNTS” with “I have to say, strangers form great / cognitive maps.” it also opens a description of her writing as a whole, attempting to compose maps across a great range of source information to answer questions about how and why people act the way they do, and how and why the world, precisely, exists and acts the way it does. These are poems of experience and attention, as well as short essays on comprehension. And Showler is capable of deep attention, even within poems that might distract with her dark and quirky observations and humour. Her playful explorations are immediately clear simply through a list of poem titles, whether “PORTRAITS OF SEVERAL LAMPS BROKEN WHILE HOUSE-SITTING,” “CONFESSIONS FROM THE DRIVER OF THE GOOGLE STREET VIEW CAR,” “SOME FINAL EXPLANATORY THOUGHTS” and “A SHORT AND USEFUL GUIDE TO LIVING IN THE WORLD,” that ends with: “The trick is to try to live in Earth time / and keep the vigil of an orbit around anything. // Employ these and other strategies that prove useful. // Please write to me of your success.” These are poems far more interested in exploring the correct questions to ask, but ask they do, and demand at least some kind of response. One can’t help but respond.