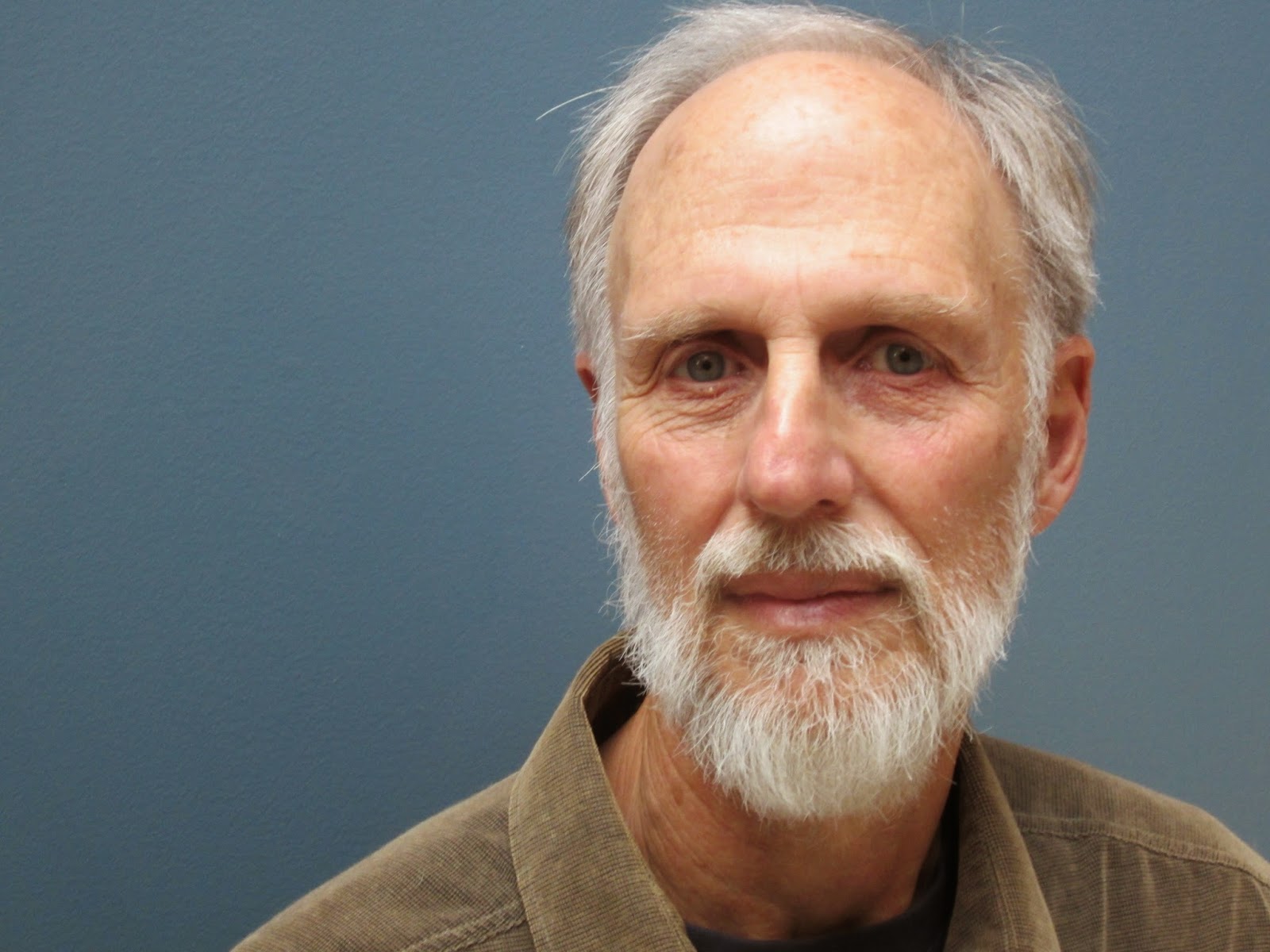 From early April to early June, I’m featuring short interviews with the authors of the six shortlisted titles for each of the three awards run through The League of Canadian Poets – the Raymond Souster Award, the Gerald Lampert Memorial Award and the Pat Lowther Award. Today’s feature is Salt Spring Island poet Murray Reiss, whose book The Survival Rate of Butterflies in the Wild (Regina SK: Hagios Press, 2013) is on the shortlist for the 2014 Raymond Souster Award. See my previous Gerald Lampert Award shortlist interviews with Julie Joosen and Jordan Abel. The winners to all three awards will be announced on Saturday, June 7, 2014 at The League of Canadian Poets 2014 Annual General Meeting in Toronto.

Murray Reiss was born in Sarnia, Ontario, and lives on Salt Spring Island, BC, with his wife Karen, a ceramic sculptor. Since moving to Salt Spring in 1979 he's been a pizza maker and ice cream scooper, special education teacher and child care worker, and coordinator of the Salt Spring Water Council. For four years in Vancouver he was B.C. coordinator of Tools for Peace, doing solidarity work to support Nicaragua's revolution. He currently works as a freelance editor and environmental writer. His poetry and prose have been published in literary magazines and anthologies in Canada and the United States, including Rocksalt: An Anthology of Contemporary BC Poetry and Poems from Planet Earth, and short-listed for a number of prizes and awards. His chapbook, Distance from the Locus, was published in 2005 by Mothertongue Press. He performs with singer-songwriter Phil Vernon as the "folken-word" duo Midnight Bridge, with one CD out so far, and his recent spoken word climate action performance poems can be found on YouTube. The Survival Rate of Butterflies in the Wild is his first full-length collection.

1. The Survival Rate of Butterflies in the Wild is your first trade collection of poetry. What was your process of originally putting the manuscript together, and how long did it take? How do you feel your concerns as a writer has developed over the space of starting the collection to finally seeing a finished copy at your front door? How do you feel the work, and even the process of writing, evolved?
The book grew out of a single image — father your eyes that snow in Poland / bury me in my crib — that came to me over 30 years ago. Over the years, long before I conceived of Survival Rate as a book I wrote a number of the poems that, in one form or another, eventually found their way into the manuscript. It was only when I received a Canada Council grant that I sat down to write the book as a book. That process took about six months. A key event in the book's evolution to its final form was a ten-day workshop/retreat I did at Sage Hill in Saskatchewan with Priscila Uppal. There were five of us in our group, and all of us were working on manuscripts of deeply obsessional personal material, drenched in trauma and pain. Over those ten days I drastically edited, restructured and rewrote much of the book. Emblematic was the process by which a three-page poem that just never worked became a four-line poem that is now pivotal. My concern became to explain less and less with each draft so that each poem was clearly situated in that liminal space I call Poland-before-I-was-born.

2. Who do you read to reenergize your own work? What particular works can’t you help but return to?
When I was writing the book, Eastern Europeans — Paul Celan, Tadeusz Rosewicz, Vasko Popa, Primo Levi and Jean Amery; the Spanish speaking magi — Cesar Vallejo, Lorca, Neruda. Now, the poets I keep returning to include Tony Hoagland, Bob Hicok, Gerald Stern, Charles Simic. As well as a few new (to me) discoveries: Patricia Smith's Shoulda Been Jimi Savannah and Jane Springer's Murder Ballads.

3. You’ve lived on Salt Spring Island for quite some time, and I’m curious as to how the community of writers around you, as well as the landscape of Salt Spring, have contributed to your work. Do you think you might have been a different kind of writer had you lived in another part of the country?
Salt Spring has been an incredibly nourishing and supportive place to live for many practitioners of marginal arts, poetry included. Let me quote from my introductory remarks from my book launch here: "I want to acknowledge — and appreciate — what a nourishing and sustaining home we've created here on Salt Spring for all things literary and, I like to think, poetry in particular. In a world of constant pressure to conflate society with the economy, culture with commodities, and value with price, artists of every kind find ourselves increasingly marginalized. And in terms of this dominant market paradigm, it's hard to think of a more marginal enterprise than poetry. As my mother used to say, "From this you can make a living?" Well mom, probably not. But, with a bit of luck, you can make yourself a life. You can't, however, do it alone, so again, thank you all for coming out tonight and for your steadfast support of the creative spirit wherever it may alight."

I would have been a different person had I lived in another part of the country (and I often say I can't imagine where else I would want to live) so I suppose I would have been a different kind of writer too. Much of my work is very different from the poems in Survival Rate — it feeds on and is fed by my daily life here, my home, garden, loved ones, trees and streams and coastlines. I find it hard to imagine writing precisely those poems were I living anywhere else.

4. The Survival Rate of Butterflies in the Wild explores your father’s deep and dark silence around the Holocaust, specifically the fact of him having lost his entire family to it. How were you able to approach such a difficult terrain through writing, and what do you feel the experience taught you?
Writing was the only way I could approach the terrain of my father's silence. I'd never been able to approach it in life, when he was alive (he died when I was 19). Writing, for me, has never been about answers. It's always been a way of posing questions. Another line that is central to the book goes, My father set me an impossible riddle before I was born. I've always been more interested in impossible riddles than answers. In questions that you have to answer — in some sense your life, or the meaning of your life, depends on your answering them — only you can't. Survival Rate lives and breathes in that space of impossibility.

One thing writing this book taught me was that no matter how intensely personal the experience (I mean, I was writing about growing up the only child/son of a father who learned, just months before I was born that his entire family had been killed in Poland) if you get it right it will speak to all kinds of people who, no, have not had that precise experience (who else has?), not exactly, but recognize in it their own experiences of loss, estrangement, and incomprehension in the face of the human condition.

5. How did the manuscript come together as poetry, as opposed to, say, writing it out as non-fiction or fiction? What was it about the form of poetry that allowed you to articulate some of those silences?
This book could have been written in no other language but that of poetry. Well, maybe dreams, but that's too private. In what other tongue can you write of your father bringing home a mannequin to teach you to live like a Jew, or how the infamous Dr. Mengele delightedly experimented on you and your clubfoot twin? People sometimes ask me if these poems are what I experienced growing up. I always answer, No, they're what I've made out of what I experienced. Or, too be more precise, out of the little I remember, conjure, construe—Eliot's famous "fragments I have shored against my ruin." What I've made out of all that is poetry. Or, perhaps, poetry made itself.

6. Literary awards have been known to shine spotlights on individual works and authors, as well as writing generally, but has also sometimes brought with it a particular kind of pressure, and a frustration for those works overlooked by awards. As a writer, reader and, now, shortlisted writer, what are your feelings on literary award culture generally?
I've always approached awards as a consumer, and shortlists as a kind of Consumer Reports rough guide to help me winnow through the otherwise unmanageable flood of poetry, novels, stories, essays, published every year. Now that I'm a shorlisted writer myself, I hope it helps a few more readers find their way to my book.
Posted by rob mclennan at 8:31 AM
Labels: Gerald Lampert Memorial Award, Hagios Press, interview, Murray Reiss, The League of Canadian Poets