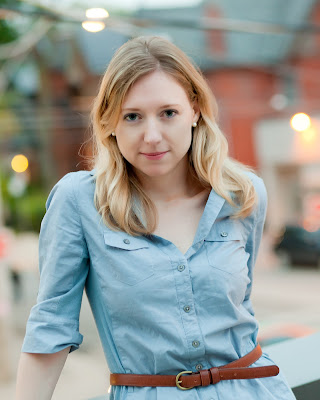 GENEVIEVE SCOTT is a graduate of the University of British Columbia’s Creative Writing MFA. Her short fiction has been published in literary journals in Canada and the United Kingdom, including the New Quarterly, the White Wall Review, and the Bristol Short Story Prize Anthology, among others. Her short films have screened at eleven film festivals throughout the US, Canada, England, and Ireland. Genevieve grew up in Toronto and currently lives in Southern California with her husband and son. She teaches English at the Laguna College of Art + Design, and she is a creative writing mentor to at-risk teen girls in Los Angeles with the nonprofit WriteGirl. Catch My Drift, her debut novel, launched in April 2018 with Goose Lane Editions in Canada.

My first book changed my life by showing me I could do the thing I had always wanted to do before learning that doing it was hard. I published my first short story seven years ago, which was very big for me at the time, but completing a whole book felt like the most honest thing I’d done with my life to that point.

I’ve always made up stories – rarely complete stories, unfortunately, but there is usually a grand central station of rushing narratives occurring in my head. This happens without thinking. Non-fiction seems to involve an intimidating amount of deliberate thinking and opinion-having. I’d like to try it sometime, but it’s not my natural direction. I would also love to write poetry, but when I’m in the middle of a fiction project and have what I might think of as a poetic observation, I tend to look for a way to use it in what I’m already working on. I’m not good at having two creative projects happening at once: one will always swallow the other.

Starting a project is the easy but commitment to a direction is difficult. Early on in a project, every day I have to force myself not to just scrap what I’m doing and start something new. It’s hard to know when to make the call to just persevere with something What was fun about writing Catch My Drift, a novel in stories, is that each new chapter actually got to be something new. At the same time, I was working with a familiar cast of characters, so I wasn’t starting from zero when I got down to work. But I’m not a particularly fast writer, even when I steady myself on a project. I re-read and re-work prose a lot as I go. I don’t really know how to work any other way, though I’ve certainly heard a lot of people recommend a “never stop and edit your first draft” approach – I’d love to do that, but I just can’t bear it. The possible upside of this slow and likely inefficient process is that first drafts are usually about 75% of the final shape.

4 - Where does prose usually begin for you? Are you an author of short pieces that end up combining into a larger project, or are you working on a "book" from the very beginning?

I don’t know, hopefully I’m both kinds. Catch My Drift very much started as a handful of short pieces, which then became anchors for a novel. I built new stories around those fixed spots. However, at the moment, I’m working on a book from the very beginning. Without anchors to plot the novel’s course, I feel a little more overwhelmed and adrift, but I also feel a little more liberated.

Readings make my audience very real to me. I think the pressure to entertain a live audience, even when that audience is theoretical, makes my writing better. I have done a lot of fine- tuning in preparation for readings: edits I probably wouldn’t have made if I didn’t have the opportunity to think so consciously about audience reaction. When a work is published, I still like readings because I’m curious about how the audience will take things. But I’m terrified of boring people. For that reason, I like to keep readings pretty short.

I don’t know if there are broad questions or theoretical concerns that drive me, at least not all that consciously. If there’s a particular thing I’m always trying to work toward – or at least trying to remember to think about – it’s specificity. I took a few writing classes with Cordelia Strube several years ago, and she explained the whole idea of “the more specific, the more universal”. I think that if fiction is doing something in service of universality, if it’s helping us imagine people or situations we have never seen before -- or have seen before but without recognition – that’s a good thing. That’s always been true, and it certainly is now.

Moving on from above, I think part of a writer’s role is to be an empathetic watcher of the world and to give readers a way to shift how they see something without that shift feeling like work.

Essential. Working with my editor, Bethany Gibson, was a great experience for me. I love the companionship of a good editor. You can’t expect an editor to solve all your problems, but having that kind of backup is both freeing and reassuring; I think it can lead to more bravery in your writing.

That moment when you’re writing and you just sort of stop because you want to get a pickle from the fridge or check Facebook real quick? Don’t stop. Because you usually only do this when the going gets tough for a moment and stopping breaks your concentration more than you think it will. Often the best writing comes when you force yourself to power through that squirminess, even if it’s a bit painful. I can’t remember for sure who I heard this from – someone on a panel at a writer’s conference.

I have trouble sticking to routines, but I’m trying to change that -- I do think I would get more done with a fixed time slotted for work. Historically I’ve just given myself a word count for when I write, usually 1000 words, which is fine and well if I’ve found the time be at my computer, but it’s really easy not to find this time. I have a one-year-old son and my idea that I’d write during naps is not working because that’s also when I have to call the dentist and take a shower and pick the banana off the carpet, so something needs to change. I’ll review what others have responded to this.

Books. I will pick up a book I’ve already read and start reading on a random page. Reading another person’s work, sentence by sentence, makes writing feel easier: it’s like, OK, this is how it works, just put a sentence down, doesn’t have to be brilliant. Sometimes talking about my work can also help. Again it’s the pressure not to be boring to whoever is listening: an idea starts to improve as I begin saying it out loud.

12 - What fragrance reminds you of home?
Lilac trees.

TV dramas were a big influence on Catch My Drift. I was watching a lot of shows while I was writing CMD and I often describe it as kind of like a TV drama: each chapter is its own independent story, like an episode, but the pieces come together to reveal the effect of time. The spotlight is not always on the same character from one chapter to the next, you don’t see all the little things that happen between chapters, but it’s not like you're insurmountably confused without the filler.

I really admire the writers who can be witty and thoughtful about difficult or complicated things at the same time. Lorrie Moore, David Sedaris, Margaret Atwood, and Curtis Sittenfeld are a few coming to mind immediately.

I’d like to try a non-fiction essay some day, something memoir-ish.

In a total other world where being a writer was off the table, I think I might try being a therapist.

I’m a writer because I did a lot of something else before and it never quite felt like me. I’ve done market research, consulting, communications, one year of a PhD, fundraising, teaching. Writing isn’t easy, but it’s the most un-boring and emotionally full occupation I have had.

Recently I really loved The Idiot by Elif Batuman. It’s really funny and I don’t laugh out loud that much at books. What’s interesting to me is that I’ve seen great reviews of this book that say it doesn’t have  a “point”, but I was personally very compelled by the romantic question that trucks along in the narrative. Mainly though I found the narrator breathtakingly perceptive about language, early college, and that time in your life when all you’ve learned about communication starts to feel wrong to you.

I have not watched a new film in ages, but I showed my students Sarah Polley’s Away from Her in the fall after assigning Alice Munro’s “The Bear Came Over the Mountain” and I loved it so much and am so glad a film like this got made. It’s such a moving, remarkable adaptation of what a lot of people might think of as too quiet a story for screen.

I’m working on a novel. I restart it every day.