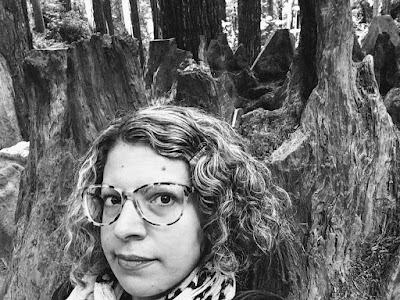 Melissa Eleftherion is a writer, librarian, and a visual artist. She grew up in Brooklyn, dropped out of high school, and went on to earn an MFA in Poetry from Mills College and an MLIS from San Jose State University. She is the author of field guide to autobiography (The Operating System, 2018), & six chapbooks: huminsect (dancing girl press, 2013), prism maps (Dusie, 2014), Pigtail Duty (dancing girl press, 2015), the leaves the leaves (poems-for-all, 2017), green glass asterisms (poems-for-all, 2017) & little ditch (above/ground press, 2018). Founder of the Poetry Center Chapbook Exchange for San Francisco State University, Melissa now lives in Mendocino County where she manages the Ukiah Library, teaches creative writing, & curates the LOBA Reading Series. Recent work is available at www.apoetlibrarian.wordpress.com.

Having field guide to autobiography accepted for publication was very rewarding & a huge relief. I had been working on it for seven years - through two Master’s degrees, a baby, postpartum depression, a near-divorce, a big move & a career change, etc. When I awoke to the email from the first publisher, I was ecstatic. Then, it changed my life again when the first publisher was outed as a sexual abuser, and the press folded. As a woman & sexual trauma survivor, there was a lot of emotional labor & I was angry for a time. Ultimately, it changed my life a third time when it was picked up by Lynne from the Operating System & found its rightful home.

My recent work is more direct & uses fewer filters than I did with field guide, for example. In chapbooks like little ditch, I’m mustering courage to confront traumas I’ve experienced instead of using lenses to tell the story.

I’ve tried to write fiction in various forms for years but it always comes out poetry. I suck at devising plots and creating narrative structure. Every November, I try to write a novel during NaNoWriMo and fail miserably. It works out, though because I usually get a few poems out of it. Essays are another form I can get into, but they require a lot more time. Right now in my harried librarian/mom life, it’s the marginalized world of poems for me.

It depends on the poem. Some emerge over time from copious notes, and others spring forth, almost parthenogenetically, where it feels like the poems are writing me. As I know is true of many poets, sometimes the poem comes, takes over, and is balls-out take-no-prisoners - you must write the thing. Spicer’s radio. Other times, I’m a procrastinating jerk who reads too much instead of writing.

A poem usually begins for me with a line or fragment. Depending on timing, I’ll try to jot down the line and see if it leads anywhere. Most often, I’m trying to make poems in the spare moments between running to work or picking up my son from school. Sometimes, I’ll actually leave the library during my break & try to go write. I tend to compose larger works by accreting these fragments until they become something else.

Public readings have their place in my creative process. They sometimes help me test out newer work. Though, I’m an ambivert so they often require energy I have to cajole from the depths, and time away from my family which can be challenging. As the branch librarian & manager of a small-town public library, I spend my days interacting with lots of people in & around my community so it can be challenging to summon more energy for social stuff. Once I get over my anxiety, I usually enjoy them, though.

I’ve had this intuition that we’re all fragments of one magnificent, multi-cellular organism and that was the impetus for field guide to autobiography, which I started writing back in 2007 when I was pregnant with my son. So - with field guide, I wanted to explore the connections and relationships between and among various organisms.

Also - what are the stories of the apple tree, of the echinoderm? They’re not for humans to make up, of course, but to imagine a glimpse into their world for a moment using scientific language from field guides about their habitats, their small parts, and ecosystems was exciting.  And - what can humans learn from trees, sea stars, ammonite, and wrens to live more harmoniously, & fight the capitalist push to assimilate and be a body of war?

The question that comes up for me most often is “am I doing enough as a white ally to combat the rampant racism & white supremacy that pervades American culture & what else can I do?”

The current questions (in the U.S. at least) seem to revolve around how to prevent more damage from being incurred - to our people, our water, our air, our food, our human rights, our educational system, our healthcare - they’re being callously & heinously mistreated or polluted by pathetic, greedy, bloated, racist white men in suits.

I’ve said this before but it bears repeating - This is a critical time for poetics and creative communities to share resources and support one another against these myriad, heinous assaults on our human rights. There is such strength and resilience and courage in using art to overcome adversity, to educate, to connect, to galvanize, to transform, to activate people to see beyond & keep fighting & caring for themselves and one another. As poets, we have the capacity for shaping language to create new paradigms where racial & cultural differences are celebrated, consent is actively taught to all genders, privilege is acknowledged, and intergenerational communities live among one another symbiotically. Art & language can mobilize people to reshape not only our understanding of ourselves, but also transform our impact as a species.

I’ve only worked with a few outside editors on anthologies & found the input to be helpful, but neither difficult nor essential.

I don’t have a typical writing routine right now because I’ve been working 60 hours a week & have a kid, but in all honesty - I haven’t ever done the thing consistently where I wake up at 5 am to write. Lately, I write whenever I’m not too exhausted, sometimes on lunch breaks, sometimes late at night. My most consistent writing “routine” has been to stay engaged with various poetry projects so I continue to produce poems, even if I’m in a fallow period.

Most often, I turn to other books. I read omnivorously. I also try to re-engage my work playfully by working with found poems. Creative play helps me loosen & dislodge stuck ideas & helps me puzzle out problems. I work a lot with source texts for found poetry projects - my two consistent texts are my “autobiographical dictionary” & field guides.  I also try to collaborate with other poets in various 30/30s. Last year I wrote 31 erasures using Anne Rice’s Ramses the Damned: The Passion of Cleopatra. Another favorite project is the poetry postcard project. For about 10 years, I have organized & participated in ongoing exchanges where poets & artists send handwritten poems on postcards back & forth for a period of several months. Writing pithy postcard poems has been very generative.

Yes, all of the above. I’m in perpetual fascination with science & nature, and am a big curious nerd (even though I had to take summer school Physics 2x in undergrad). I also love working with ekphrasis, and being in conversation with visual art & various kinds of music.

For starters, I’d like to gain confidence with driving on the highway. I didn’t start driving until after we moved to a small town at age 40, and only recently bought my first car. I’d also like to visit Southern Italy & Greece, and hike Mount Olympus with my son.

I’ve wanted to be a BMX racer since I was 12, but I’ve finally surrendered the fantasy. I guess I’m doing the only other job I’m capable of doing - librarian.

Somewhere during a regressive period in my late 20s, I realized I had to choose either photography or poetry to commit myself to, & stop being such a dilettante. As a first generation college student who dropped out of high school & put herself through college while working full-time, I had spent my late teens & most of my 20s focused on making rent. Going back to school for my MFA allowed me a sense of permission to spend time working on poems, and a sense of direction in helping me to learn craft & shape my work.

I’m currently working on a few projects - right now what stands out is this series of poems I’ve been writing about various minerals. It’s been both generative and satisfying to learn about minerals and write about them. I also found this cool online mineralogy database. Some of the language used is oddly foreboding of the ways our land & its people have been ravaged by capitalist greed (and grief). There’s a strange, rich understanding - right there in the Earth’s crust.