Wake up around midnight and it is raining. You soaked red lentils in a pot since before the morning. Put the pot on a burner set to high heat. In another pot pour oil then it goes on the burner set to medium heat. Each will need 45 minutes. Pour wine and pull a yellow onion from a basket. Papery flakes fall on the floor. You leave them there. Chop and drink and let tears clean your face. Drop in the cumin seeds. They sizzle and dance. Onions, more cumin, lemon, tomato, red powder, yellow powder, salt and honey get spooned into the hiss.

Combine what is in the two pots into one bowl and put it aside. Go to the porch. Smoke in the rain before you go back to sleep. (Soham Patel, “to afar from afar”)

The highlight, for me, at least, has to be the introduction to the work of “San Francisco Bay Area educator, capacity builder, writer, and occasional porch gardener” Aja Couchois Duncan, author of the book Restless Continent (Litmus Press, 2016). Her work in the volume, a selection from a longer prose-poem, “Nomenclature, Miigaadiwin, a Forked Tongue,” is apparently also included in Restless Continent, and introduces an curious, inquiring and elegant lyric:

I should begin with adik, with reindeer and caribou. To know the geography of it, to start with its features.

Your face is this blur of fur and antler.

My story is the history of frontier, a wooded terrain. We could not see each other through the cacophony of trees. But I could hear you breathing. Some kind of wind the nose sings. Adze is stripping the layers of. When the skin is torn from muscle, cleaved from bone.

Agawaatse is not sound but shadow. An interception of light. 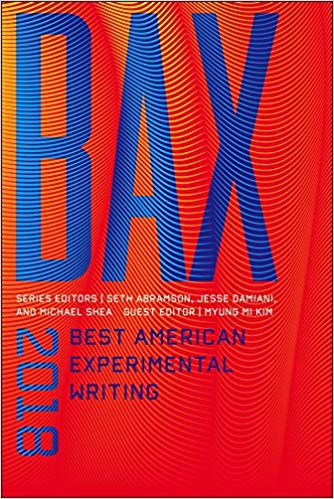 For her part, it’s good to see this note from editor Kim as part of her introduction, writing that: “As with former guest editors of BAX, I chose not to include colleagues past and present, current or recent students, writers who were published in previous editions of BAX, and past editors of BAX. This means that many, many exceptional writers are not part of this volume. I made every effort to gesture towards small magazines and other publishing projects that may be less visible in the larger fabric of the discourse around experimental writing. One of my priorities in gathering material for BAX 2018 was to feature emerging writers. At the same time, recent work from some established writers made it possible to acknowledge/reframe stakes and commitments of experimental writing practices.” This is interesting in a few ways, including the fact that Kim, as well as prior editors, aren’t including work by writers who have already appeared in the series, allowing for a far more open field of contributors, one that works very deliberately to utilize the series as one of introduction, which I am very much appreciating.

CHAPTER ONE: “What’s Your Diaspora?”

The work included in the volume is wide-ranging, from lyric essays to testimonials to visual pieces to more traditional elements of poetry and fiction, and part of what drives the collection to be as strong as it is does include showcasing the myriad ways in which writing can exist, including some of the most incredible blends of social/political writing with language writing and the lyric. Nicole McCarthy’s “Chatter” is a fascinating text that overlays new stanzas upon what has already been presented, obscuring the text and providing a fascinating visual display of overheard voices interfering with each other; the text itself becomes ambient noise, impossible to discern. Rosa Alcalá’s fascinating essay-poem, the monologue-esqe “Voice Activation,” a piece that performs itself even while on the page, opens: “This poem, on the other hand, is activated by the sound of my voice, and, luckily, I am a native speaker.” I’m also quite taken by Stine An’s poem sequence “Orientations to Lemons, or Patience Is a Seed,” that includes:

a sun grenade
holding your hand
in oily dimples

our family tradition is evergreen ever rue-ful
we bear bitter seeds in deep wombs (“LEMON: AN ORIENTATION”)