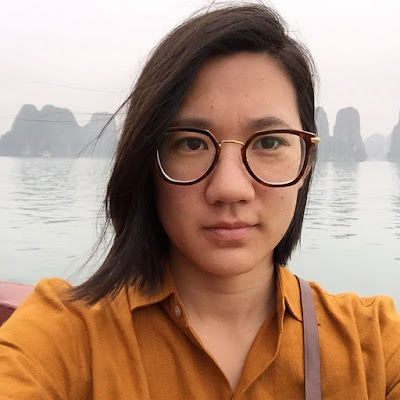 Diana Khoi Nguyen’s debut collection, Ghost Of (Omnidawn, 2018), was selected by Terrance Hayes for the Omnidawn Open Contest. She is a poet and multimedia artist whose work has appeared in Poetry, American Poetry Review, Boston Review, and PEN America, among others. In addition to winning the 92Y "Discovery" / Boston Review Poetry Contest, she has received awards and scholarships from the Academy of American Poets, Bread Loaf Writers Conference, and Provincetown Fine Arts Work Center. Currently, she lives in Denver where she is pursuing a PhD in creative writing and teaches in the Daniels College of Business at the University of Denver. www.dianakhoinguyen.com

The way any first is life-changing: nothing is the same—doors have opened, visibility and attention as increased, and now I am charged with the responsibility of representation and shepherding Ghost Of in the world—sharing the work with fellow writers, friends, family, strangers. Most of the work in the book is unlike anything I have worked on previously primarily due to the visual-hybrid nature of the Ghost Of poems.

In third grade, we were charged with keeping a notebook, and encouraged to write poems about our observations of the world. I continued writing poems up until college, where I had hopes of taking fiction workshops and ultimately becoming a novelist. However, I couldn’t gain admission into any fiction workshop, so threw my hat into the ring for a poetry workshop (after remembering I’d won some poetry prizes in high school) and was accepted on my first try. And the rest, was history, as they say.

I’m both an ox and a cat (slow and quick). It takes typically three months to incubate ideas via curated research and viewing of Criterion Collection films, modern art, etc. Then I write a poem a day for fifteen days, which I refer to as 15/15. I do this twice a year, with close artists and writer-friends: we exchange work each day during the 15/15 to hold each other accountable.

Sometimes first drafts resemble nothing like their final form—and sometimes quite close to it. It all depends on where the poem is and what it needs.

I find that intense focus and scrutiny—obsession, really—is more fruitful for my process, which is to say—to have a project from the beginning which propels / compels discrete poems/pieces into being.

Conversely, it sometimes takes writing some short pieces without a project in order to (dis/un)cover what my project is.

I do enjoy doing readings, but wouldn’t be able to do any social activity (such as giving a reading, teaching, attending a conference, etc.) while I’m writing in my biannual 15/15.

Social literary activity is necessary to literary citizenship—insofar as it can inspire new ideas, ways of thinking—and encourages cross-cultural exchange and dialogues.

I am always trying to escape myself and anything which is familiar to me (forms, modes, paths).  This requires a lot of reading to become as versed in and familiar as possible with what’s been done and done so well historically, and today.

The role of the writer is to tell the truth, if it it’s a lie. To see and speak and not be silent.

n/a (I’ve not worked with an outside editor)

One, which I’ve mentioned, “Tell the truth, if it it’s a lie” (Lucie Brock-Broido) and to “end on an image and don’t explain it” (Stanley Kunitz).

10 - How easy has it been for you to move between genres (poetry to multimedia work)? What do you see as the appeal?

Very easy—I try not to limit my thinking, consideration, and composition to boundaries of genre—that is, when I sit down to create, my possible tools are numerous (words, space, image, etc.). The appeal is to use what I experience as a human—in my work as a creator of things. Why limit ourselves?

My biannual 15/15 marathons happen in the summer and winter (typically August and December).

During a typical 15/15 day, I begin the day with reading, exposing myself to art, watching a Criterion Collection film, then finally—after meals, naps, showers, and much procrastination, I sit down to write around midnight and work in the quiet late hours until a poem is as final as I can make it.

I turn to essays from my first mentor, Cal Bedient, and inoculate myself with visual art and film (non-writing works).

The Vietnamese Buddhism incense we burn at the altar for those no longer with us.

Make a documentary film. Create a performance piece / installation. See a production of a play I wrote.

Oh, this is a hard one. I have always dreamed of being a textile print designer for Marimekko in Finland and/or a ballet dancer. Now, in the wake of Anthony Bourdain’s death, I realize that I’ve also wanted to follow in his journalism footsteps: meaningful inquiry into and dialogue with other cultures and places.

I don’t think I would have ever not been a writer.

18 - What made you write, as opposed to doing something else?
The same impulse which defines my personality, which makes my body and mind into the person I am each day. Which is to say, the inevitability of what is inside and around me.

Interviews with first and second generation members of the Vietnamese diaspora in the U.S., which are part of the research for my dissertation. Because this is a PhD in creative writing, the dissertation will be creative in nature, featuring poems, hybrid forms, plays, video and audio pieces, hopefully culminating in an installation-commemoration site that captures the refugee experience of so many Vietnamese after the Fall of Saigon.

Posted by rob mclennan at 8:31 AM
Labels: 12 or 20 questions, Diana Khoi Nguyen, Omnidawn