In Europe around the turn of the last century, all upper-class boys were ceremoniously photographed wearing sailor suits. Now flea markets all over the continent overflow with little blue sailors who cannot save themselves. All up and down the diverted and straightened canal, some Romantic had once planted willows. Meanwhile, the lily flower had long since been abstracted into the fleur-de-lys. (1., “TRANSACTION HISTORY 3”)

American poet and longtime resident of Berlin Donna Stonecipher’s latest collection, following The Reservoir (University of Georgia Press. 2002), Souvenir de Constantinople (Instance Press. 2007), The Cosmopolitan (Coffee House Press. 2008), Model City (Shearsman. 2015) and Prose Poetry and the City (Parlor Press, 2017), is Transaction Histories (Iowa City IA: University of Iowa Press, 2018). Reminiscent of the work of Cole Swensen for her use of the extended, single line, Transaction Histories, as the back cover offers, is a gathering of “six series of poems that explore the disobedient incongruities of aesthetics and emotions,” yet this is also a collection constructed as a single, ongoing prose sequence, pushing further and further through the possibilities of the sentence. There is something of Russell Edson’s prose-poem influence in her work (an influence I’m not entirely fond of), but one that borrows as part of an array of influence, as opposed to something replicated. Stonecipher’s prose-explorations exist more in the fluid space, it would seem, between Edson’s narratives and a more lyric strain, akin to a poet such as Cole Swensen, or even, given her focus on sentences, Lisa Robertson. The lyric elements of her sentences have the most intriguing ebb and flow, moving through her prose like water.

The emotion bottling up in the champagne Marxist was either going to explore, skyrocketing him into the stratosphere, or sink him like a stone in his Gucci jeans. There were fates worse than being too clever by half, such as being insipid in spades. Or being a head buried and reburied in sand. We hated the developers, true, but that didn’t mean as soon as we got any money we wouldn’t buy the fanciest new apartment we could. (9., “FOUND TO BE BORROWED FROM SOME MATERIAL APPEARANCE 1”) 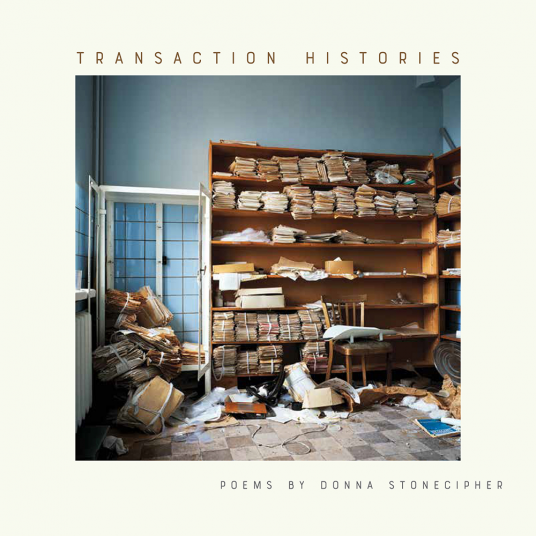 There is a fine tension she explores as well, between “aesthetics and emotions,” moving between and among landscapes of history, vision, artwork and writing, shifting across a wide field of interpretations and responses, as well as the collisions that occur between seemingly unconnected thoughts, images and sentences. “It is not possible to map a coastline,” she writes, to open part 4 of her poem “TRANSACTION HISTORY 5,” “because the closer you zoom in, the more complexly intricate is the tracery of the coves and jetties, the sandbars all sliding off the map to be swallowed up by the great Unpredictable.” Stonecipher’s Transaction Histories explore the prose poem through multiple entry points, utilizing the building blocks of sentences to accumulate into stanzas, stanzas to accumulate into sequences, sequences to accumulate into sections, and sections to accumulate into a single, stunning, book-length work.

If you make a declaration of love under a waterfall, does anyone hear it? The anthropologist disdained the phrenologist, though he had one of those porcelain phrenology heads on his mantel. It took almost three years to dismantle the building. She was trying to get funding for a research project in which she would determine from exactly how many apartment windows in the city the TV tower, or even part of it, could be seen. (1., “FOUND TO BE BORROWED FROM SOME MATERIAL APPEARANCE 4”)

Posted by rob mclennan at 8:31 AM
Labels: Donna Stonecipher, University of Iowa Press