scotland the brave (or: when we were high(land,

Did I mention we were away for nine days? No? Only our second child-free travel together since Rose was born [see our prior trip here], organized in part because Christine received a writing grant earlier this year, and part of her pitch included some research at the British Library (we’ll be getting to that soon; we’re not there yet). Our wedding anniversary occurs here as well, which is pretty exciting. What might we get up to? So, here we begin:

Tuesday, Sept 25th
We left the wee girls with mother in law for the sake of a later afternoon flight for Halifax. A flurry of motion, moving, activity, and even saw a friend of mine at the Ottawa Airport, heading his own way back west. How random! After our first flight, we spent some three hours in the Halifax airport, where Christine wrestled a dinner-lobster larger than our smallest child (or so it seemed). We traded toddler stories with our waitress, who spends a couple of days a week with her granddaughter. 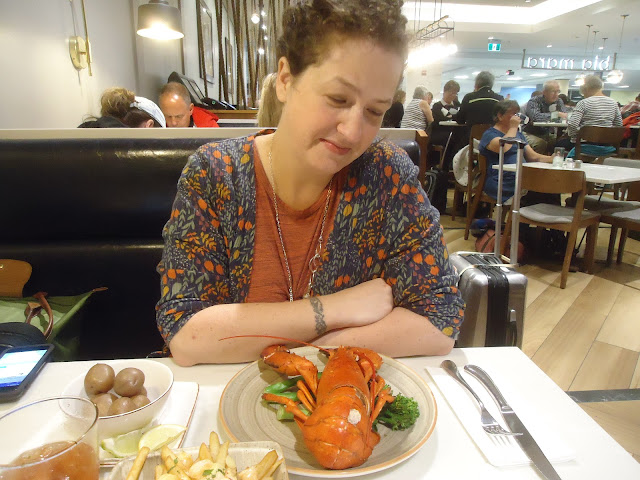 I learned: I do not like lobster poutine. Very bleh. One bite was enough.

Mother in law emailed, asking: what time does Aoife usually go to sleep? Out cold by 6pm (an hour earlier than we usually attempt her down).

I’m reading Stephen Collis’ Almost Islands: Phyllis Webb and the Pursuit of the Unwritten (Talonbooks, 2018), a title that landed on my doorstep some two hours before we left for our flight. It seemed to make sense to bring it along.

I read, worked a bit. Took many notes. Slept.

What time is it now? I have no idea. An overnight flight to London.

Wednesday, Sept 26
On the airplane to London, I took notes, I read Collis’ new memoir. Wow. I scribbled and slept and we both slept, landing in London at 8am local time (five hours ahead, don’t you know).

Which means: 8am local time means our bodies recognized 3am. 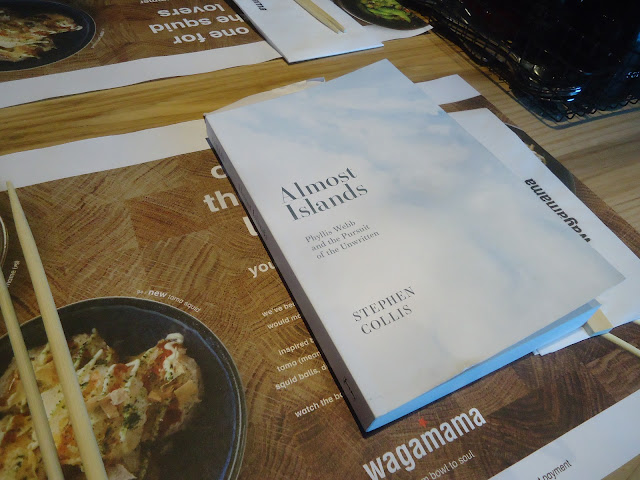 Three hours in London, where we breakfasted or lunched or something I’m not even sure before flying the ninety minutes north to Inverness. What might we see at Loch Ness? I slept the entire flight up to Inverness, preferring to sleep there than, say, once we landed.

We landed, dropped off our bags. Air B+B, up three flights of stairs with our bags. 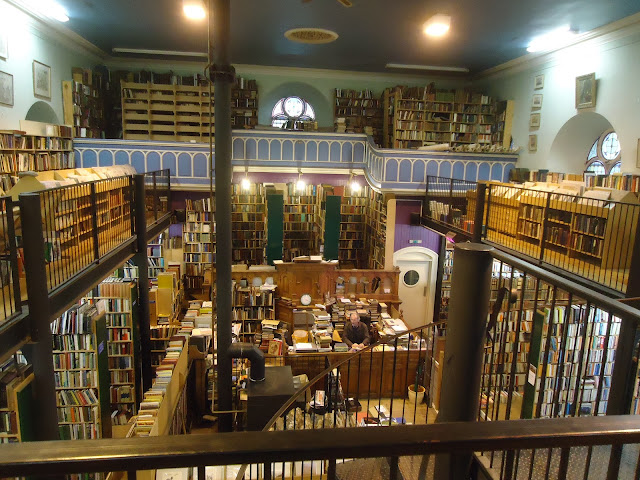 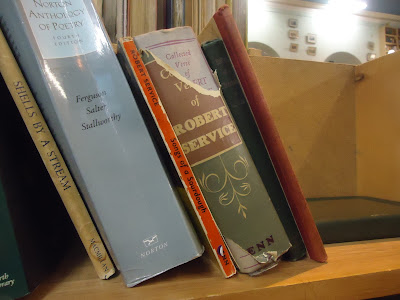 Heading out again. Stamps. Postcards. Cobblestone, catching the toes of our shoes. The most beautiful antiquarian bookstore space, held in a building attached to a church (with a circular staircase, wood fireplace and stained glass windows). The most beautiful store, but nothing I could find for the sake of purchase. Christine bought a memoir by a former editor, Diana Athill, that intrigued. Apparently she was editor for V.S. Naipaul, and wrote something interesting on him after he died.

The only Canadian-esque poetry titles we could find: Robert Service. 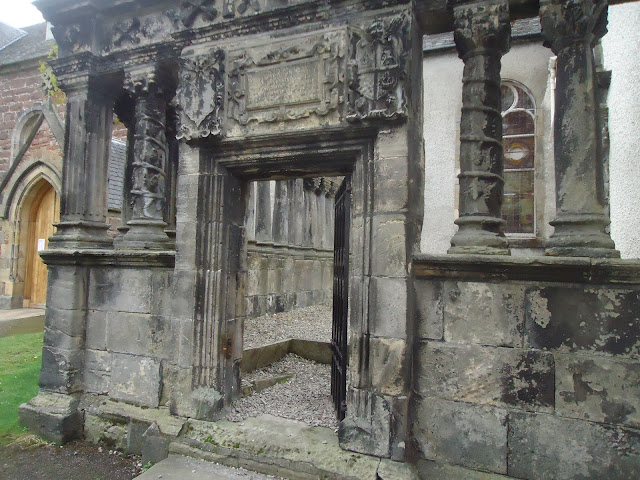 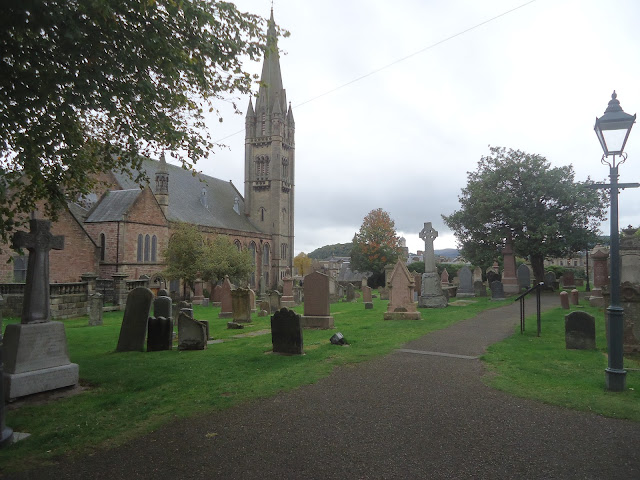 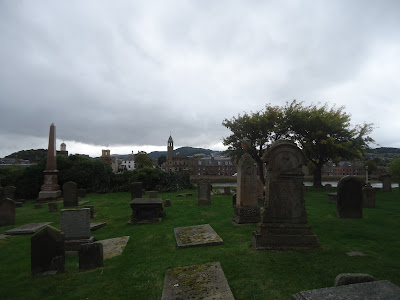 And then, exploring a churchyard, at the Old High Church. The many names of the dead, less old than I might have thought. 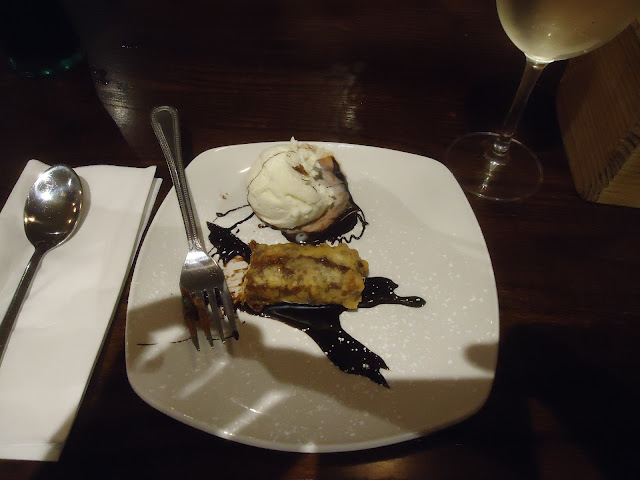 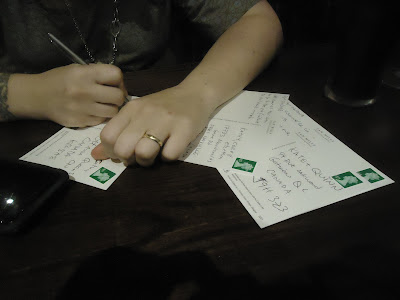 We found a decent enough pub-chain for the sake of dinner, and managed to also enjoy my very first deep fried Mars bar. Apparently they were invented nearby in 1992 (and are neither endorsed or even recommended by Mars Inc.). It was strange but I liked it. Better than the Philly Cheesesteak, better than the Lobster Poutine (bleh). Even better than the crawdads in New Orleans (which I liked). Christine presented paragraphs of Diana Athill’s memoir; okay, this was worth it.

And, being in the Highlands, I put in my tartan underwear.

British television, as Christine says: you need to watch. Every channel, everywhere: four hours-plus worth of nothing but repeats of Top Gear. Is this normal?

Thursday, Sept 27
Waking up at eight a.m. local time was rather exciting (we are still pretty jet-lagged), especially given we were taking a twelve-hour Highlands/Isle of Skye tour, scheduled to leave the station at 8:30am. At least the station was only two doors away (thanks to a very clever Christine). 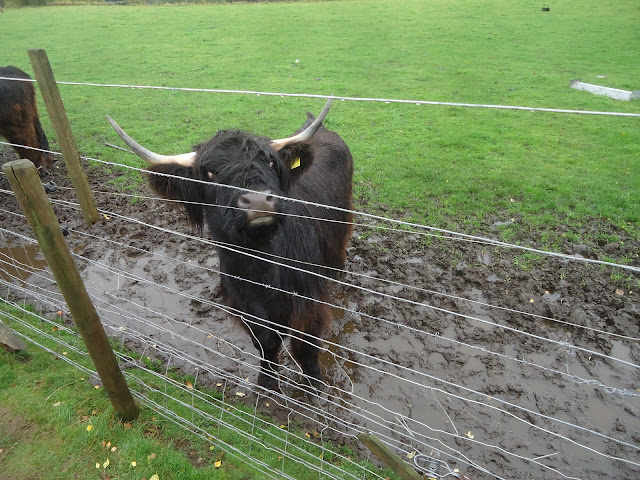 We had a TWELVE HOUR TOUR ON A BUS (apparently this was my anniversary present from dear wife). It was unexpectedly: highly entertaining, highly educational and interesting, and the lunch and food dinners we ordered off the menu were quite worth it. I took notes, and sat beside an American woman, Lisa, who was pretty lively. Originally from Los Angeles, living currently in Utah, and only days off a trip to Hawaii, before her five weeks in Scotland (meaning she was seven hours off the time zone of home, but twelve hours off her trip from Hawaii).

We went to Loch Ness,where we learned entertaining facts about the incredible depth of the infamous Loch. We went by the ruins of Urquart Castle, Grant Tower, St. Columba and the Hill of the Fairies. We heard about the Caledonia Pine Forest, Rowan berries and saw Highland cattle. We heard of goats who had been living in Scotland for 4,000 years, but not yet considered a local species (how much longer do they require?). Jacobites. Silver birch wine, once made by monks, who have long disappeared, along with the recipe. 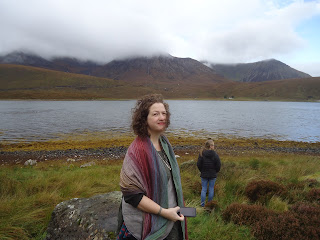 Glen Cluny, Loch Cluny. The Cluny Inn, from the 1950s. The five sisters of Kintail, whereabouts our McLennans originated, back in the 1840s. Dragon’s breath, covering the hills. Eilean Donan Castle. We later learned, a Mackenzie castle, said to be looked after by the Macrae and Maclennans at various points. The ugly mermaids of Raasay. Lusty Malcolm. What exactly was peat, and how and why to gather to burn. Christine looking particularly Gael (channeling The Outlander's Claire). 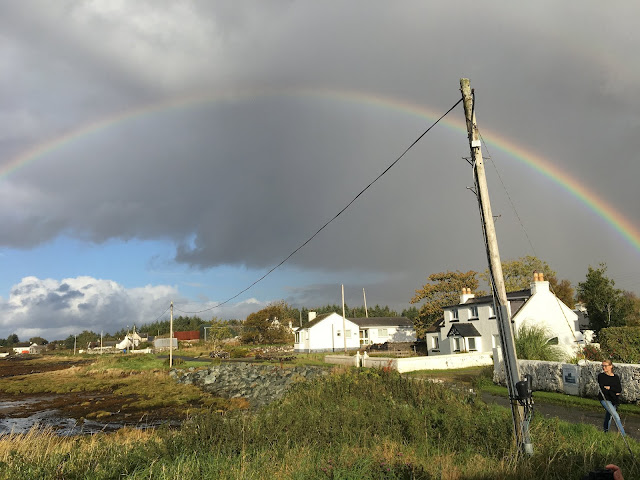 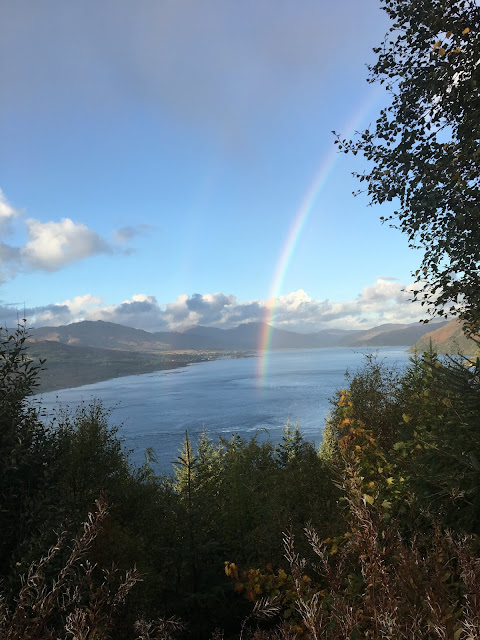 We saw an awful lot of rainbows. I mean, a LOT. At least three double rainbows. Perhaps it was all the rain. Torrents of rain rushed and ran dozen of silver threads down the endless hills. With the hills angled straight down, such a volume of water has no choice but to tumble. Oh my. 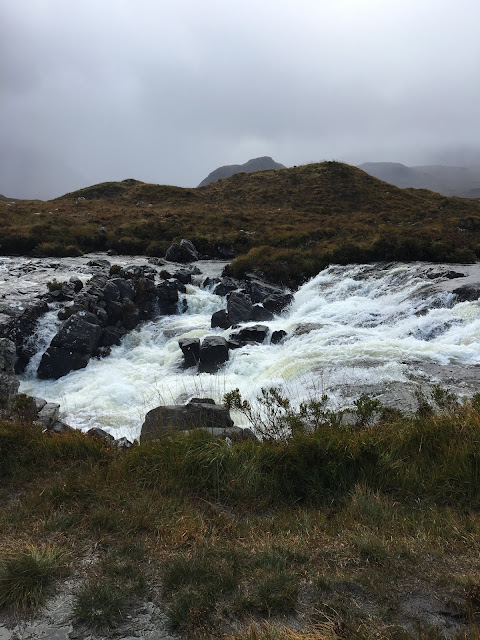 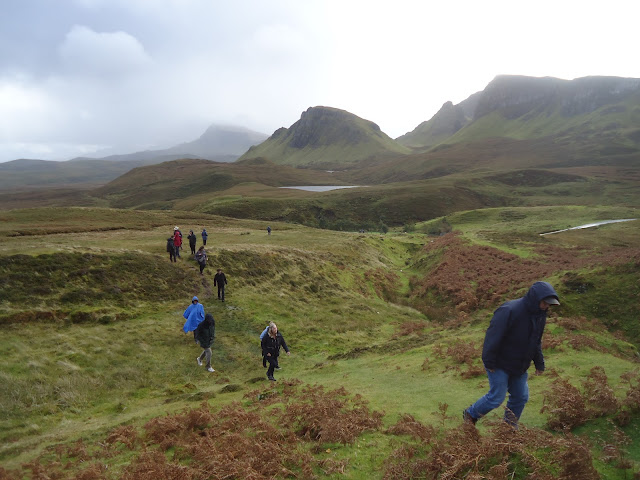 We went over to the Isle of Skye. The hill of the Old Women. King Haakon. The ruins of the McKinnon stronghold. Saucy Mary. We climbed a damned hill. Some seven minutes of climbing, our tour guide claimed; we could see an alternate tour higher up, part of a four-hour excursion atop the hill, akin to goats, perhaps. We were pleased to not be part of that, set in the wind across the moors and the heather and the thistle and bristle and rain, attempting as best we could to avoid the multiple small piles of sheep dip. 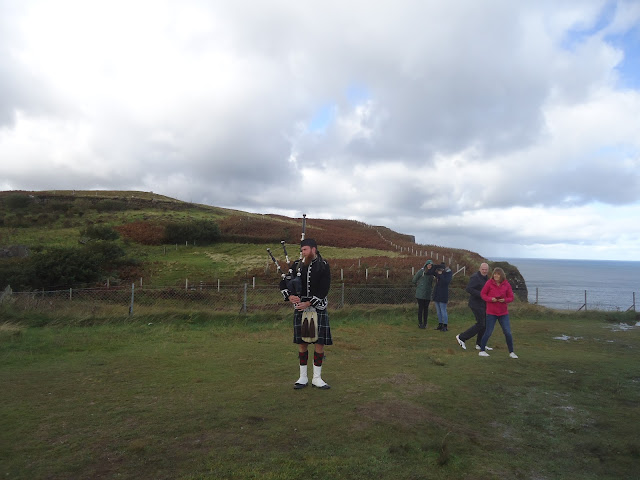 A piper came to play at Kilt Rock, Isle of Skye. The way the Tour Guide was speaking, I had to explain to him that I'd heard pipers before, and heard the Scots Gaelic, and that I grew in a place that has language classes for such (he had no idea; it had never occurred to him).

More information than I could ever recall, record or retain. I have much to look up.

What I enjoyed was the plethora of place-name I knew as familiar, from my corner of Ontario: Glenelg, Perth, Avonmore. Glengarry. 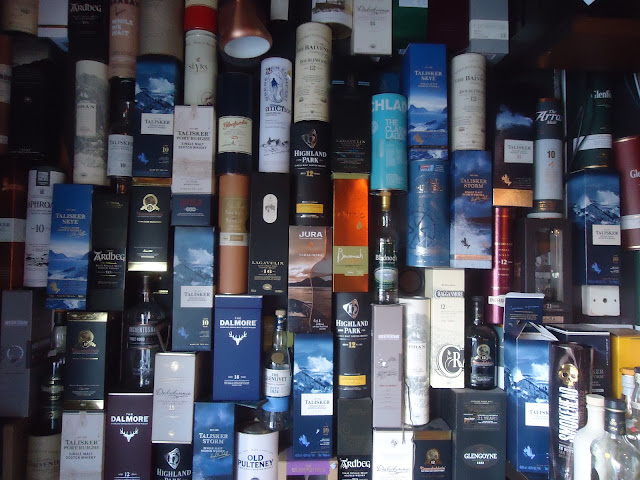 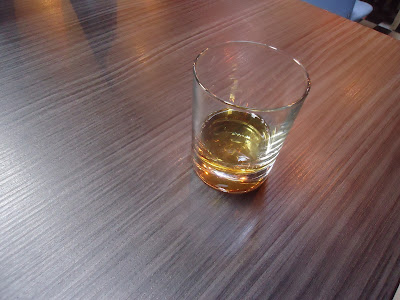 Isle of Skye: why yes, I did have a whisky. When in Rome, etcetera.

So, do I drink whisky now? Perhaps. 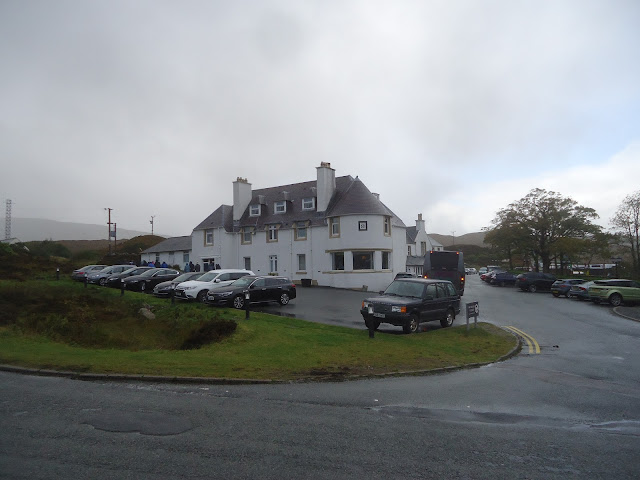 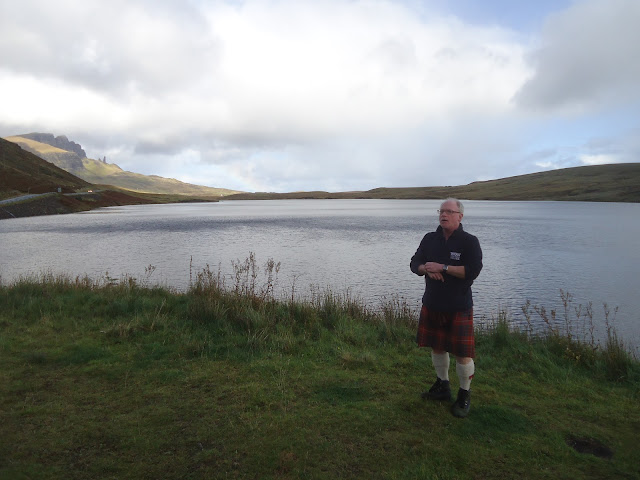 Beaulie, a town name from the French – beau lieu – meaning “beautiful place” (what say you, derek?).

The tour was impressive, and I would highly recommend (WOW Scotland). When Sandy (we loved his knowledge and his enthusiasm), our tour guide, wasn’t talking to us, he was talking to the driver, who seemed both amused and slightly irritated by Sandy’s constant suggestion (again, the enthusiasm) to stop, mainly for photos of further rainbows, “oh, here’s a spot…”). 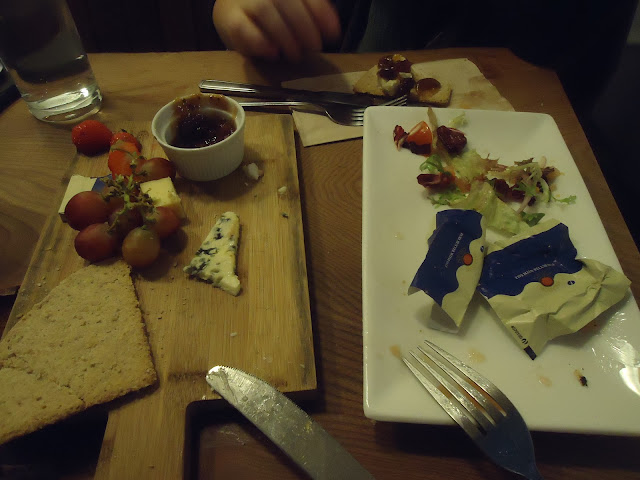 We found a post-tour pub for a pint and a bit of food, but the piano man was too loud, loud, loud. Retired instead, pick up some bits at the corner store, return to Air B+B, up those three flights of stairs. Top Gear. Red Dwarf XII. Mock the Week. Star Trek: Into Darkness. 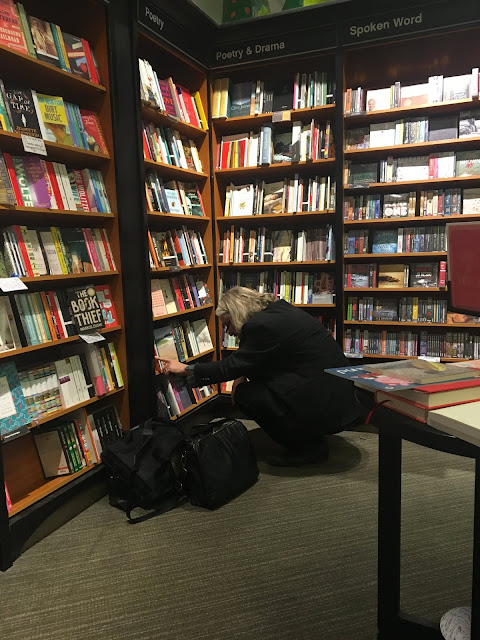 A quieter day, including leaving our Air B+B, wandering out for breakfast and figuring out our day, before an 8pm train overnight into London. We gathered ourselves to a dip into the mall to see what options we might have (where I finally picked up a copy of Hera Lindsay Bird’s Hera Lindsay Bird, as well as Luke Kennard’s CAIN) (Rose also informed us that we are to collect them both books and chocolate, which we are keeping our eyes out for). 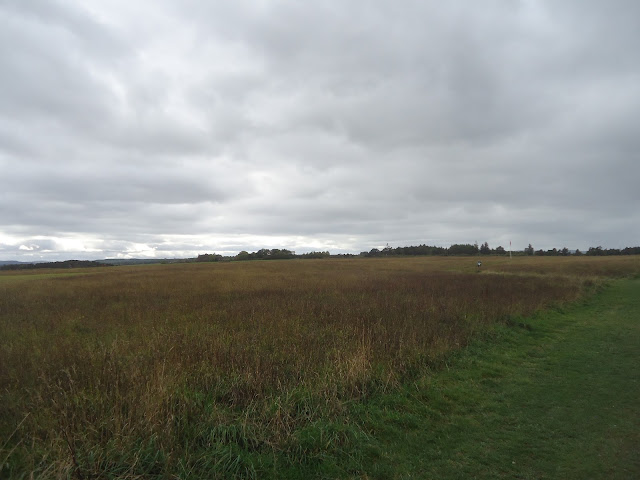 Figuring out the local transit, post-mall, we made our way to the Culloden battlesite, where I clearly didn’t know nearly enough of what it was all about. Jarring, the whole thing, seeing the battlesite, and multiple stone markers set in the 1880s for mass graves. Gordons, Campbells (the closest my family might have come), Fraser, McIntosh, McGillivray, etcetera. 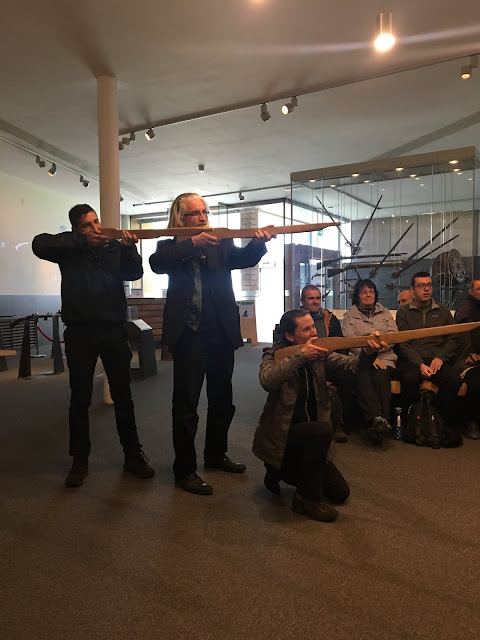 We learned the term “Johnny Lobster,” a term for the Government soldier, and were given a rather lively ten minute demonstration of gear and fighting, as well as the tricky ways in which the Government filled their soldier-ranks.

I was part of the demonstration, with my faux-musket, holding my own as firing-line two (my compatriots, line one and three, were far less enthusiastic about participating). 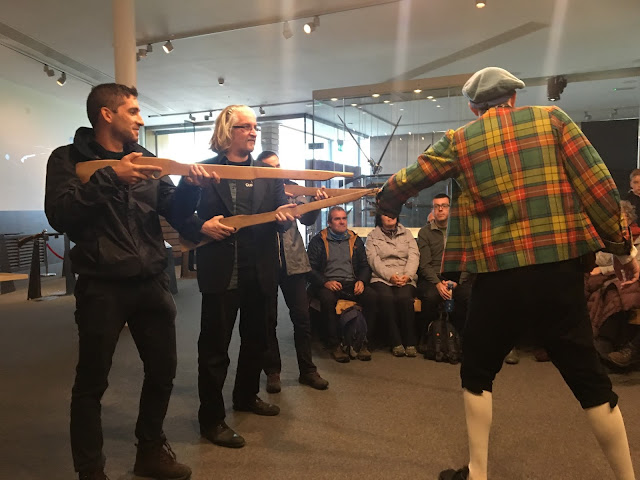 The four-minute immersive room/film was quite frightening, not only for the brutality, but the speed at which such historic battles began and were simply over. Less than an hour, and history irrevocably turned. I clearly have to read more up on this, especially how it basically provoked a decimation of the highlands, etcetera. Christine found some information on the internet (somewhere) that spoke of eleven McLennans/Maclennans being captured after the battle, but the fact that we weren't there due to our being nearly decimated at some early pre-Jacobite battle. Ah well. 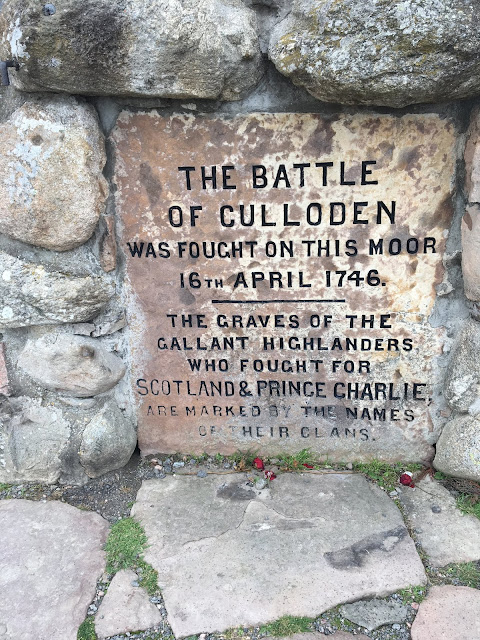 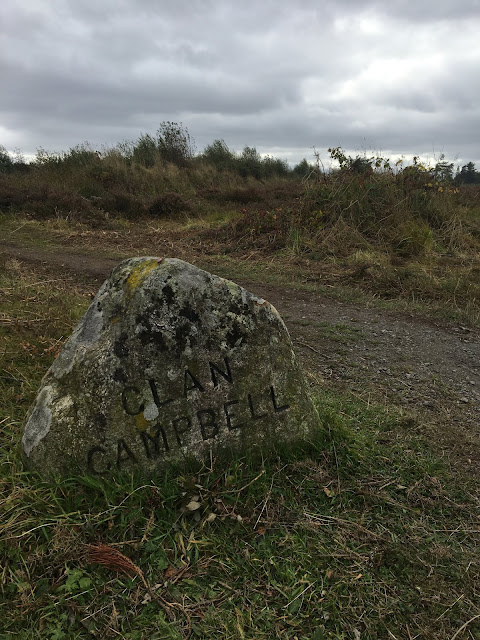 Although the immersive film was quiet the first couple of minutes, showing and feeling the empty Culloden Moor. I actually turned to Christine at one point and asked: maybe this is the immersive film for the day prior to the battle?

Post-battlefield, we visited the gift shop, where I picked up a mangonel (I had really been hoping for a trebuchet, but there you go; Christine won’t let me have either one properly, so I finally have something, if only in pencil sharpener form), and had a meat pie, soup and a pint (Wooha). Back to the bus, we figured out that we were seven minute past the time when the hourly bus returns (our driver there lied, saying it was every thirty minutes) to take folk back to Inverness, so we went back for a (well, ahem, another) pint. Christine visited the shops. I worked to complete and post this very entry (how meta!). 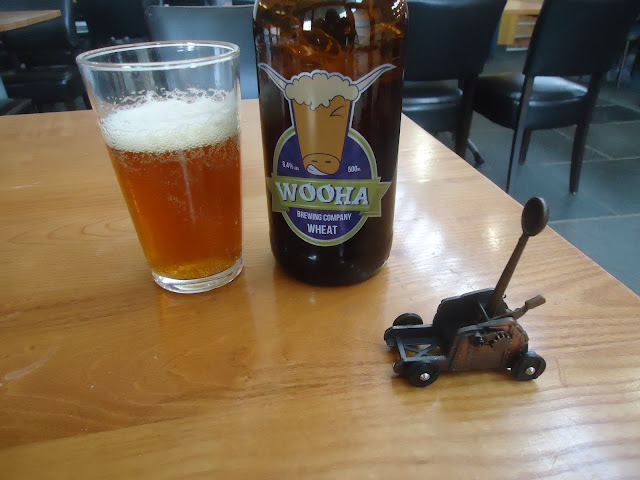 And then the overnight sleeper train, heading overnight into London.