Wedding: a small report (with pictures)


I’m sure everyone knows by now that Christine McNair and I were married at Gordon Church, St. Elmo [see my write-up on the historic church and why we used it, here] in Glengarry County on September 29, 2012. It was an incredible day, surrounded by plenty of friends and family (and yet, many we’d hoped might be able to attend were unable to make it). Below is a photo taken at my insistence of the entire crowd of attendees behind us in a group shot, in front of the church post-ceremony. A couple of years ago, I saw an amazing post-wedding ceremony photograph of my great-uncle Donald McLennan (August 1, 1898 – August 17, 1955) and aunt Jesse (September 12, 1904 – August 13, 2011) from their Ottawa nuptials, July 22, 1930 [I posted the photo on Jesse’s obituary, here], and wanted our own version. 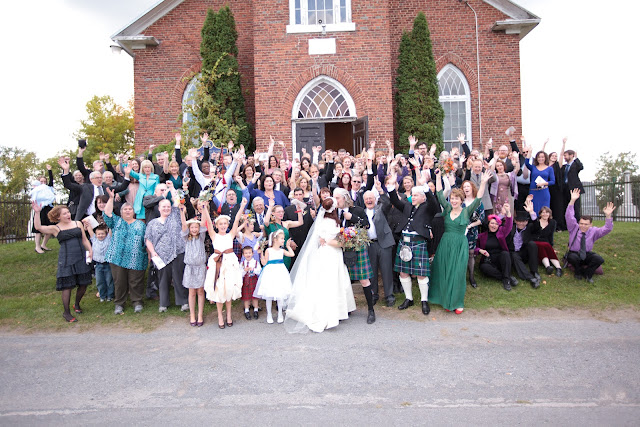 [photos by Julie Young for Photo Van Beek] The ceremony was conducted by my uncle, Don Moore, a retired Presbyterian minister, and husband to my mother’s remaining sister, Pam. He’s been participating in various family funerals over the years, and he even officiated my sister’s wedding a few years back (recently licensed to do same, Pam officiated my young cousin Peter’s nuptials last fall). Ottawa beer rep and member of the Glengarry Pipe Band Ross May did the piping, and Stephen Brockwell did a remarkable job as best man, as did Christine’s aunt Trish, in her role as Maid of Honour. Parents were essential, as was my sister, and a number of others who we couldn’t have done any of this without. We had tons of food at our Ottawa reception, including macarons produced by a pastry chef who works out of Lebreton Flats, German pastries made by some of Christine’s family, and then of course, there’s the photograph of our magnificent wedding cake, posted a couple of days ago. And yes, I did actually wear the proper tartan for the McLennans, and the best man, Stephen Brockwell, wore his mother's tartan, MacRae. 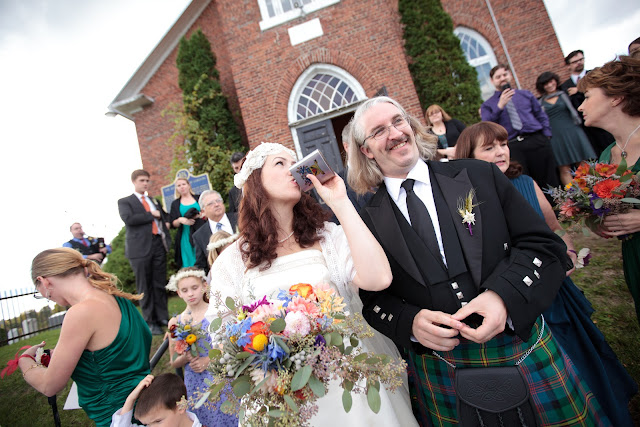 It’s pretty safe to say we’ve been overwhelmed with the good wishes, support, cards, emails and gifts throughout, as well as by the ten-day honeymoon that moved its way through London, Paris and Brussels (as well as Flitwick and the village of Coton). Now that we’ve been back for a couple of weeks, we are finally, slowly, settling in to whatever comes next. Just what might come next?
Posted by rob mclennan at 9:01 AM
Labels: Christine McNair, Glengarry, Macarons et Madeleines, McLennan genealogy, photos, rob mclennan photo, The Cake Whisperer, wedding

I think I may have missed leaving my congrats on Facebook, Rob (unless liking photos counts). A hearty congratulations --- love these pictures and the joy they reveal!