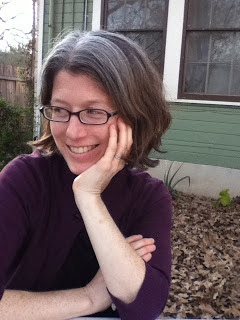 Julia Bloch grew up in Northern California and Sydney, Australia, earned an MFA at Mills College and a PhD at University of Pennsylvania, and is the author of Letters to Kelly Clarkson (published by Sidebrow Books in April 2012). She is the recipient of the San Francisco Foundation’s Joseph Henry Jackson Literary Award and the William Carlos Williams Prize for Poetry, is an editor of Jacket2, and recently moved to Los Angeles to teach literature in the Bard College MAT program.

1 - How did your first book change your life? How does your most recent work compare to your previous? How does it feel different?
I started writing Letters to Kelly Clarkson a long time ago, when KC was competing in the first season of American Idol (2002), although it didn't come out until 2012. I've worked on other books before and since, so this book feels less "first" and more like its own animal, or something that has accompanied other projects and come in and out of prominence for my writing practice. We've both gone through a lot since I started those poems: new albums, new hair, new jobs, new cities. My most recent work is different; I left the prose poem and am working in lines again. I use less first person. I'm more interested in syntax, playing with and distorting sentences. I still care about pop culture and music and representations of women's bodies. I still care about address. Laura Splan's amazingly beautiful artwork is on the cover of the book, and I couldn't be more grateful for that: having the book finished and out there feels to me very much like what she calls "perceptions of beauty and horror, comfort and discomfort." It's an artifact now of that perception - an artifact rather than an ongoing process/thing.

2 - How did you come to poetry first, as opposed to, say, fiction or non-fiction?
I came to poetry after writing and producing plays and writing fiction when I was younger. My teachers told me my stories sounded like poetry. I loved writing dialogue, though, especially in the plays; I think the turn to poetry had a lot to do with the way I was hearing language and writing it down. I'm still interested in the way we hear speech in poetry.

3 - How long does it take to start any particular writing project? Does your writing initially come quickly, or is it a slow process? Do first drafts appear looking close to their final shape, or does your work come out of copious notes?
I do a lot of sketches, note-taking, and free writing. I then spend a lot of time cutting, condensing, and recombining. I think a lot about Lorine Niedecker, who wrote, "I love to delete and eliminate." I strip everything down pretty severely. My first drafts look very little like the poems do after many months of redrafting. I'm an obsessive editor of my own poems, in part because I spent many years working as a professional proofreader and copy editor.

4 - Where does a poem usually begin for you? Are you an author of short pieces that end up combining into a larger project, or are you working on a "book" from the very beginning?
I think a lot in sequences; I've written a lot of series poems that themselves are short but that together make up sequences of 10, 20, 50, etc. I love very short lines, very short stanzas, and short poems that pile up on top of one another. I'm intrigued by the way some poems can stand on their own and the way others mean the most in relationship to other poems that surround them in a sequence.

5 - Are public readings part of or counter to your creative process? Are you the sort of writer who enjoys doing readings?
Especially now that I've been teaching for quite some time, I think about poetry readings as having a pedagogical aspect to them: kind of like teaching your readers something new about the work, a new way to hear and experience its action on the page. I learn a lot from poets who read their work aloud. I curated a reading series in Philadelphia for several years (http://writing.upenn.edu/pennsound/x/Emergency.php) that was committed to creating an ongoing dialogue among working poets on how they think about poetic lineage, theoretical stances, and aesthetic practice. So, we heard the poems, and then we had dialogue about the poems, about connections between the poets, and about what the poets think about community, practice, and so forth. To me that was much more interesting and generative than hearing poets read and then calling it a night. Interacting with poets as part of a community feels really essential to my practice.

6 - Do you have any theoretical concerns behind your writing? What kinds of questions are you trying to answer with your work? What do you even think the current questions are?
In LKC, I was pretty interested in gender theory and exploring representations of female celebrity, the female body as a spectacle, reality TV as a profit machine that we feel emotionally attached to, our relationship to pop culture, our desire for and fear of intimacy. As an academic I think a lot about theories of language; some of that comes up in my poetry, intentionally and accidentally.

8 - Do you find the process of working with an outside editor difficult or essential (or both)?
Totally essential - I think all writing happens in dialogue with others.

9 - What is the best piece of advice you've heard (not necessarily given to you directly)?
"Take Fountain." - Mae West, to aspiring starlets in Hollywood.

10 - How easy has it been for you to move between genres (poetry to critical prose)? What do you see as the appeal?
I'm really interested in blurring the boundaries between genres. My favorite critical works are doing the work of poetry; my favorite poetry is theorizing. In my own work, I feel like I'm using different muscles to write criticism and to write poetry, but the issues, arguments, problems are the same.

11 - What kind of writing routine do you tend to keep, or do you even have one? How does a typical day (for you) begin?
I work really well in the mornings, usually before sunrise. I can't work in the same place every single day. I need lots of books around.

12 - When your writing gets stalled, where do you turn or return for (for lack of a better word) inspiration?
I start reading again. I'll write in response to a word or phrase I find, or rewrite a line that feels flat. I'll take notes, make sketches, think on paper, watch a video clip, look at art.

13 - What fragrance reminds you of home?
Eucalyptus. This isn't a fragrance, but hearing western scrub jays.

14 - David W. McFadden once said that books come from books, but are there any other forms that influence your work, whether nature, music, science or visual art?
I take notes in galleries and at concerts. If I ever live near nature again I'll probably do something in response to it. Maybe I'll imitate Stephen Ratciffe's Temporality blog (http://stephenratcliffe.blogspot.com/).

15 - What other writers or writings are important for your work, or simply your life outside of your work?
Right now I'm spending a lot of time with Jena Osman's book The Network and Eleni Sikelianos' The California Poem.

16 - What would you like to do that you haven't yet done?
Play more instruments. Finally learn how to draw.

17 - If you could pick any other occupation to attempt, what would it be? Or, alternately, what do you think you would have ended up doing had you not been a writer?
Vegan chef?

18 - What made you write, as opposed to doing something else?
I liked it too much.

20 - What are you currently working on?
A MacBook Air.