When you finish your novel, if money is not a desperate priority, if you do not need to sell it at once or be published that very second – put it in a drawer. For as long as you can manage. A year or more is ideal – but even three months will do. Step away from the vehicle. The secret to editing your work is simple: you need to become its reader instead of its writer. I can’t tell you how many times I’ve sat backstage with a line of novelists at some festival, all of us with red pens in hand, frantically editing our published novels into fit forms so that we might go onstage and read from them. It’s an unfortunate thing, but it turns out that the perfect state of mind to edit your own novel is two years after it’s published, ten minutes before you go onstage at a literary festival. At that moment every redundant phrase, each show-off, pointless metaphor, all the pieces of deadwood, stupidity, vanity and tedium are distressingly obvious to you. Two years earlier, when the proofs came, you looked at the same page and couldn’t see a comma out of place. And by the way, that’s true of the professional editors, too; after they’ve read a manuscript multiple times, they stop being able to see it. You need a certain head on your shoulders to edit a novel, and it’s not the head of a writer in the thick of it, nor the head of a professional editor who’s read it in twelve different versions. It’s the head of a smart stranger who picks it off a bookshelf and begins to read. You need to get the head of that smart stranger somehow. You need to forget you ever wrote that book. (“That Crafty Feeling”)

I’ll admit, I haven’t yet managed to get too far into any of British writer Zadie Smith’s novels. Given my bias against longer novels, it’s quite amazing I own any at all, yet I couldn’t help myself after reading an amazing interview with her by Eleanor Wachtel in an issue of Brick: A Literary Journal a couple of years back [see a short essay I wrote where I quote from such here]. Smith is obviously highly intelligent, and a writer capable of great things, so it was a treat to be able to use her recent collection of non-fiction, Changing My Mind: Occasional Essays (Penguin Books, 2009) as a possible entry-point into the rest of her works. The first thing I can tell you about this collection is in how it proves just how damned well Smith can write, composing sentences that sparkle, and observances that creep up on you in their radiance. “This book was written without my knowledge.” Smith writes in her “Foreword.” “These are ‘occasional essays’ in that they were written for particular occasions, particular editors.” She writes:

This book was written without my knowledge. That is, I didn’t realize I’d written it until someone pointed it out to me. I had thought I was writing a novel. Then a solemn, theoretical book about writing: Fail Better. The deadlines for these came and went. In the meantime, I replied to the requests that came in now and then. Two thousand words about Christmas? About Katharine Hepburn? Kafka? Liberia? A hundred thousand words piled up that way. 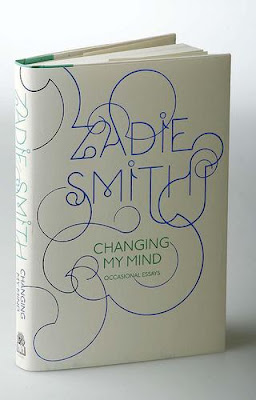 As Smith herself suggests, these pieces cover a range of subjects, from E.M. Forster, Barthes and Nabokov, Hepburn and Garbo, Visconti’s Bellissima, the Oscars and David Foster Wallace, as well as a trio of personal memoirs under the header, “Feeling” (the headers are “Reading,” “Being,” “Seeing,” “Feeling” and “Remembering”). I very much like the idea of an occasional essay, the random assortment of unity that comes from a series of pieces written as requested, between other works, as the writer is able. The range of subjects in Smith’s collection bring to mind another recent collection of essays by a writer predominantly known for producing fiction, Kingston author Steven Heighton’s magnificent Work Book: memos & dispatches on writing (Toronto ON: ECW Press, 2011) [see my review of such here]. If for no other reason alone, Smith’s Changing My Mind: Occasional Essays is worth it for the essay quoted above, “That Crafty Feeling,” a piece originally composed for a lecture, an earlier version of which was “given to the students of Columbia University’s Writing Program in New York on Monday 24 March 2008. The brief: ‘to speak about some aspects of your craft’.” For anyone writing or attempting to do so, the piece is wonderfully forthcoming, open and honest, and entirely familiar in the advice she gives, even as she warns that she can only speak from her own perspective, and not every approach is appropriate for every writer. Composed in ten parts that work through the process of writing, from “2. Other People’s Words, Part One,” to “7. The Last Day” to “10. Years Later: Nausea, Surprise and Feeling Okay,” the finest has to be the eighth section, from which the above quote is lifted, “8. Step Away from the Vehicle.” The opening of the second section of the essay opens:

It’s such a confidence trick, writing the novel. The main person you have to trick into confidence is yourself. This is hard to do alone. I gather sentences round me, quotations, the literary equivalent of a cheerleading squad. Except that analogy’s screwy – cheerleaders cheer. I put up placards that make me feel bad. For five years I had a line from Gravity’s Rainbow stuck to my door:

We had to find meters whose scales are unknown in the world, draw our own schematics, getting feedback, making connections, reducing the error, trying to learn the real function…zeroing in on what incalculable plot?

Someday I will enter into one of her novels, properly. I feel as though I am working my slow way towards that.
Posted by rob mclennan at 9:01 AM
Labels: Penguin, Zadie Smith