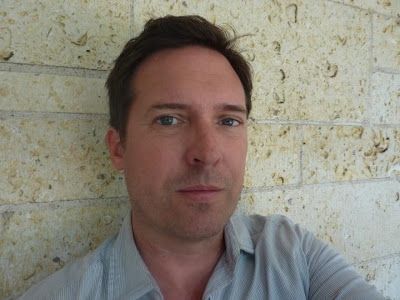 Dale Smith is a writer now living in Toronto, Ontario. He spent most of his life in Texas, with brief jaunts to the Middle East, the Pacific Northwest, and Northern California. Currently he teaches rhetoric and poetics at Ryerson University. He is the author of four books of poetry and prose, published by boutique presses. His poems, essays, and reviews have appeared in Best American Poetry, Bookforum, Chicago Review, The Colorado Review, Jacket, and elsewhere. Poets Beyond the Barricade: Rhetoric, Citizenship, and Dissent after 1960 addresses the role of poetry in public discourse, and was recently published by the University of Alabama Press. His creative and scholarly work examines the intersections of personal and public tensions in the ongoing negotiations and clarifications of contemporary life.

1 - How did your first book change your life? How does your most recent work compare to your previous? How does it feel different?
American Rambler (2000) introduced me to some ways of thinking about poetry and using literary and historical texts to reconstruct a way of thinking about New World encounter narratives through the figure of Cabeza de Vaca, the 16th century Spanish conquistador. It was a learning experience. Robert Creeley, Diane di Prima and other poets I admire responded favourably to that work, and so I felt an incredible boost of confidence.

My most recent published work is a scholarly book that considers the role of poetry in public contexts. It’s a very different kind of book. But through it I got to study ways that poets have responded to wars in Vietnam and Iraq, and how poets can engage their communities over social and political issues. My creative life and my scholarly life are somewhat different in that my critical work is based in rhetorical studies and the role of art in public culture while my other writing lately addresses personal and cultural memory, and explores narratives of individual experiences in particular cultural and geographic spaces.

2 - How did you come to poetry first, as opposed to, say, fiction or non-fiction?
I was turned onto Charles Olson and the Black Mountain writers, and to that projective appetite for perceiving different environments through writing. I don’t really make distinctions however between poetry, fiction, and non-fiction. It’s all narrative in some way for me, and prose or verse provides different strategies to engage different types of readers.

In the nineties I met Philip Whalen and Joanne Kyger, among others in San Francisco, and became interested in the events of the everyday. Long poems or serial poems that use broken verse and then morph into prose and back again inspire me, and I’ve always turned to these writers to understand how the flow of the page in part registers the perceptive process of everyday experience. Writing in this sense is tactical, creating opportunities to explore the possibilities of daily life.

3 - How long does it take to start any particular writing project? Does your writing initially come quickly, or is it a slow process? Do first drafts appear looking close to their final shape, or does your work come out of copious notes?
I write quickly but intensely in short bursts. Mostly it comes fairly intact, though I do spend time shaping and revising.

4 - Where does a poem usually begin for you? Are you an author of short pieces that end up combining into a larger project, or are you working on a "book" from the very beginning?
It depends. I have poems that I’ve yet to organize into a coherent presentational form. But mostly I think in terms of books. I prefer the long-term engagement with a writing that explores significant unified territories. Though I am very happy to work contingently. The working title for my next book of criticism is Slacker Aesthetics. Walter Benjamin is the theoretical mastermind behind it. His example appeals to me greatly. Be fluid, open, and thorough. I don’t want to impose my narrative on experience, but to participate in the shared and ongoing development of the stories we tell ourselves.

5 - Are public readings part of or counter to your creative process? Are you the sort of writer who enjoys doing readings?
Sure. I like the attention. It’s fun to read, to perform. A reading’s usually for me a place to test out new work. I don’t like reading older pieces that no longer register my current interests or curiosities.

6 - Do you have any theoretical concerns behind your writing? What kinds of questions are you trying to answer with your work? What do you even think the current questions are?
My poetry has been concerned with memory, the history of North America, and the notion of the Garden as a space of permanence and potential, while my critical scholarship pursues questions of perception in public culture. In terms of the latter, I’m interested in the textures of place that we must work to understand in public situations. The garden space—the point of contact between modernity and the archaic—inspires a more inward type of investigation. I am not interested in “me”, but in the occasions that have variously suggested “I” have been present for interesting things that are happening.

7 – What do you see the current role of the writer being in larger culture? Does s/he even have one? What do you think the role of the writer should be?
The role of the writer for me is one of labor. You read. Write. Sit alone. Think. Look at what’s going on around you. Fuck around and fuck up if need be. It’s not an important job in that sense. You have to loaf a la Whitman to see anything, so writers look kind of lazy sometimes. But there’s tremendous responsibility in that, even if we don’t want to acknowledge it. I’ve always loved writers and they have been important for negotiating my understanding of a larger culture. But other cultural figures can be just as important. I like Louis C. K. I like Father John Misty. I like a lot of counterculture critics and bloggers, too, like the Archdruid, John Michael Greer.

8 - Do you find the process of working with an outside editor difficult or essential (or both)?
Essential. Rarely difficult.

9 - What is the best piece of advice you've heard (not necessarily given to you directly)?
Joanne Kyger to me: “I don’t care what you think or feel, I want to know what’s happening.”

10 - How easy has it been for you to move between genres (poetry to critical prose)? What do you see as the appeal?
Critical prose is easier for me to deal with. Poetry is tremendously difficult. I can write critical things with less difficulty. It’s all based though in earnest concentration. I’m kind of old-fashioned that way.

11 - What kind of writing routine do you tend to keep, or do you even have one? How does a typical day (for you) begin?
I write in short bursts as time allows. But if I get caught up in something I might spend hours finishing it up. I wrote an article over the summer for a journal called Public Culture that absorbed my attention for a few weeks. I’ve also been writing a prose piece called Slow Poetry in America, but it absorbs a different type of imagination. I can write it in little pockets of time. But those pockets add up. I have about 100 pages of it written now. Sometimes I look back and wonder where any of this comes from. Having children taught me to write on the run and at odd hours, and not to worry about it so much. I’ll get there.

12 - When your writing gets stalled, where do you turn or return for (for lack of a better word) inspiration?
I read other writers. Or I’ll watch TV. Or meet someone out for a drink. Or go for a walk.

13 - What fragrance reminds you of home?
Jasmine and rosemary and sage.

14 - David W. McFadden once said that books come from books, but are there any other forms that influence your work, whether nature, music, science or visual art?
Photography. And film. Movies actually motivate much of my thinking about writing. Also Nathaniel Dorsky’s book Devotional Cinema is tremendous, and anything Werner Herzog says about making movies—film theory’s more important to me than poetry theory. Has been for a while. Film and photos teach me how to look at my environment. James Schuyler said poetry’s like a camera. Point and click. I agree.

15 - What other writers or writings are important for your work, or simply your life outside of your work?
I like the Anglo-English literary tradition, though the writing of Roberto Bolano has opened me up to a whole new understanding of Spanish and Latin American literature. He is instructive as a human being alive in the various traditions of the past. Also everything about jazz and the African American influx into our culture. Essential. I miss Lorenzo Thomas. His cadence, wit, and critique of the tedious press of power in our lives. I miss Lorenzo Thomas. And Dorn. And Creeley. And. And. But Lorenzo, lately—it’s his conversation, too, I have to reinvent because it was so joyous despite the press of things.

16 - What would you like to do that you haven't yet done?
Be better.

17 - If you could pick any other occupation to attempt, what would it be? Or, alternately, what do you think you would have ended up doing had you not been a writer?
Who knows? I have no imagination for that. Maybe a stockbroker.

18 - What made you write, as opposed to doing something else?
No imagination.

20 - What are you currently working on?
Slacker Aesthetics; Slow Poetry in America. Learning to teach. Learning to listen.

12 or 20 (second series) questions;
Posted by rob mclennan at 9:01 AM
Labels: 12 or 20 questions, Dale Smith, Ryerson, University of Alabama Press