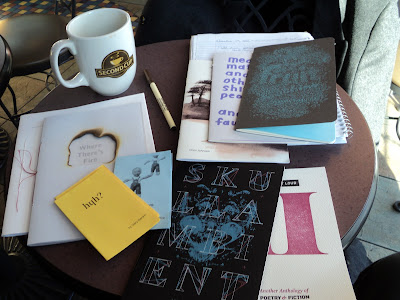 Another Ottawa small press book fair has come and gone, an event now eighteen years old (something I still find completely amazing). Here are some of the items I picked up during this year’s event. Watch here for information on the spring 2013 event, most likely to happen later in June (and announce around February or so).

And congratulations to Adrienne Gruber, who won this year’s bpNichol Chapbook Award! Hopefully I can get my hands on a copy of her book at some point.

Toronto ON: Ferno House might not have won the bpNichol Chapbook Award this year (neither did above/ground press, obviously), but the fact that they had two publications on a shortlist of six titles is impressive. Spencer Gordon was up for his own chapbook [my review of such lives here], as was Toronto poet and AvantGarden Reading Series co-organizer/host Liz Howard’s first chapbook (skullambient) (2012):

I that I am thy.
At thy happenstance of atoms.

Were the where of my happening into happened.
But only slightly.

So many, so manlike, multiplying thusly.
Into a permanence of flux, disconcerting.

Sister.
Sister none.
Other than the keeper.
Of another heart bleeding in December.

Boys.
Some of those boys who know no boredom.
Golden, even, in the significant design.

Gone too far too few in fathers.
A husbandry of worms between.

There.
Over there.
The sigh almost silenced.

I’m startled by the pure electricity of the language, a poetry that perhaps needs to be heard to fully appreciate the cadences and wordplay. Howard’s poems embrace the abstract with concrete language, strafing the familiar with disconnects that alter perception, into a kind of hyper-familiarity. I’m taken with the way she uses information and twists it, playing with the sounds and meanings, such as in the poem “ (may-tea-non-state-is-abhor-original) ,” where she writes “bienvenue / the residential school / —or ancestor, ascended” (p 16). Already in a second printing, this chapbook strikes as an incredible debut. The last page of the final poem in the collection, the four-page “ Psychogeography),” reads:

I was also able to pick up copies of Shannon Maguire’s Fruit Machine (2012), Andrew Faulkner’s mean matt and other shitty people (2012), as well as the anthology For Crying Out Loud II: Another Anthology of Poetry & Fiction (2010). In her Fruit Machine, Shannon Maguire, about to launch a second poetry chapbook with above/ground press, writes of a dark and largely forgotten part of Canadian history that destroyed multiple lives. As she writes in her “Notes”:

The Fruit Machine was a battery of psychological and physiological tests developed during the 1950s and 60s by Carleton University psychologists Frank Robert Wake to “scientifically” detect whether someone was a homosexual. At the time, homosexuality was deemed a threat to national security and authorities sought reliable ways of identifying and expunging lesbians and gay men from the civil service as well as other professions. Fortunately, the tests never proved conclusive, but the harm that their development and underlying assumptions caused was felt in the LGBT community.

Needless to say, thousands of people in the public service, military and police lost their jobs during this period, and the stain of the fruit machine can still be felt in certain corners of Ottawa. Because of this potentially loaded title, I’m not sure it aligns with the work in the chapbook, and even works to distract away from the rich variety within. The title seems to have been pulled only from a single poem, salvaged from a slight reference towards the end:

of queen with circus & coo
with wolf-velvet, blackmail
to rim with prowl for fish for flute
with bell of fruit in swing to sew
her tearoom & top fish
her swing & trade with mother-punk
of cruise wolf, of queen wolf, of punk prowl,
fish-wolf queen for velvet bell
whole sew bull
sew bull sew …
with normal words
like breast & blond & stiff & newspaper
radiator farm asphalt politician hammer
erect child cigar fight & stroke
like tearoom fight & breast fruit
like swing stiff in blond fish
like camp politician with mother-punk radiator
like top men hammer blond on asphalt
fight blond for top
blind blond with trade cigar
all part of a lexicon
of aversive substances & shocks
change in size of pupil
of the fruit machine
by the fruit machine
for the fruit machine
subdivision did

The poems within explore systems of language, perception and sensation, with a sprinkling of her favoured “wolf” scattered throughout. Maguire is very much a fan of structure, and experimenting with structure throughout, such as in the poem “Pleasure,” where she playfully echoes a binary played from Robert Kroetsch’s The Sad Phoenician (1979), a structure more recently played with by Amanda Earl in The Sad Phoenician’s Other Woman (above/ground press, 2008). As the notes at the back of the collection claims, this chapbook is “part of a book-length ‘exploded sestina called Myrmurs.” Shortlisted previously for the Robert Kroetsch Award for Innovative Writing, she already she has a first full-length trade collection out in the spring, fur(l) (BookThug). I am very much looking forward to seeing what she ends up doing with larger structures, and the larger canvas.

if she loved a man on Tuesday; epiphytes rather on Saturday

if she only undergoes a not entirely determinable series of women

admiring them for their inkjet streams & analytical coups

if by sunrise the next day the girl escaped drowning

then she takes moisture from the air; that kissed all she saw
in the factory (“LETTERS”)

Author of Useful Knots and How to Tie Them (Toronto ON: The Emergency Response Unit, 2008), Andrew Faulkner is one of the Ferno House editors and co-editor/co-publisher of The Emergency Response Unit. To my knowledge, he hasn’t had a chapbook out in some time, and his poems on terrible people explore a range of characters and voices, some of which work and others that don’t.

If you are what you eat then I
am the ass of a high school cheerleader,
high on boredom, behind the bleachers
after school. I am listening to robot rock at dawn
in a Ferrari made of glass. My body is hairless,
strong as OxyContin. I sweat oxytocin.
I gather the wind in my pipe and puff, puff.
I will not pass. I transpose your love song
from C-major to apathetic. I’ve consumed the future.
My farts articulate the past. The secret fifth chamber
of my heart weeps for your scoliosis,
but style does as style is, so I’ll be cruising
the night with my gilded twelve-foot dick.
I hope you catch my drift, emphasis dick. (Andrew Faulkner)