That which is typed
across the sight window
to screen, not save
investiture coins
phrase capture
fibrate momenting

All in all in
this ear
taste 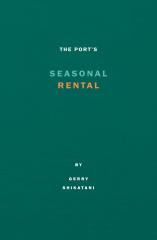 The first and only title I’ve seen from the new collaborative press between Bev Daurio and Richard Truhlar is Gerry Shikatani’s poetry collection The Port’s Seasonal Rental (Toronto ON: The Mercury Press & Teksteditions, 2011). Canadian poet Shikatani, currently based in Peterborough (although he moves around so much, he might be somewhere else by now) has been publishing poetry collections for years, extending each of his published works as a different part of the same singular line, including A Sparrow’s Food, poems 1971/82 (Coach House Press, 1984), 1988, Selected Poems and Texts / Nineteen Seventy-Three (Aya, 1989), Aqueduct, Poems and Texts from Europe, 1979/1987 (The Mercury Press / Underwhich Editions / Wolsak & Wynn, 1996) and First Book, 3 Gardens of Andalucia (The Capilano Review, Series 2, No. 39/40, Winter/Spring 2003). In Shikatani’s ongoing poetic work, one quickly sees his engagement with writing as a daily practice, producing volumes of poetry that exist as poetic notebooks, journals or day books, similar to such works by GilMcElroy, bpNichol and Robert Creeley. Given the exclusivity of his poetic output working from such a line, “a poem as long as a life,” Shikatani’s poetic line reads far closer to the work of the late Vancouver poet Gerry Gilbert, who composed a single poem throughout his whole life, adding sections to it daily as a kind of poetic journal or mapping that verges on the unrelenting. In Shikitani’s “Briefly, To Martyr and Suffer,” an essay on a fragment of bpNichol’s life-long The Martyrology (Open Letter, Sixth Series, Nos. 5-6: Summer-Fall 1986), he references a daily aspect of writing that might also be used to discuss his own work:

Nichol can pull this off because he’s not simply pulling out tricks to tug at the heart; he arrives at these in the process of writing of other daily events, and without distinction, explores them actively, explores them formally. The effect is a high drama of tragic proportions.

Those looking for mastery of content or form could come away disappointed; far better to give in to the multifaceted sensory and intellectual experience of participation and enriching travail. In fact, a reader who devotes patient and keen attention to Shikatani’s prismatic work—who “tr[ies] to look assiduously, fortuitously, precipitously, gratuitously, interrogatively, all”—may indeed find his or her consciousness altered.

The Port’s Seasonal Rental, dated “October 30, 2005 – June 7, 2006,” as the acknowledgments page tells us, “was created during my tenure as Writer-in-Residence for the University of Western Ontario and the City of London for the academic year 2005-6 and into June, 2006.” Its fascinating to work through a volume of what is so clearly poetry as a function of daily life, and the dates on the back cover highlight, somehow, the gaps in our reading as well, knowing what titles have been published and what time periods they cover, making one wonder if the entries between or since will ever see the light of day. The work in this collection is interesting, yet uneven, and one might wonder if that is entirely the point, another feature Shikatani shares with Gilbert. Is the process more important than the product? In her stellar essay, Zolf agrees with the assessment of the poem as long as a life (she quotes the same line, also, in her essay), but she goes further, writing:

It’s possible to read all of Shikatani’s work—his poetry, performances, fiction as well as the food journalism he does for money—as one work. A foremost practitioner of the Canadian long poem, Shikatani composes books (and series of books), not epiphanic one-off poems randomly collected. To use Robert Kroetsch’s definition, the serial writer creates “the poem as long as a life.” For Shikatani, the task broadens to “the poem as life,” forging links among writing, spirituality and being-in-the-world.

On Shikatani’s trade poetry collections, there has always been an uncomplicated cover design, set to be as stark and graceful as possible, and yet, this is most likely the worst looking cover of anything he has published, which highlight the limitations of print on demand publishing. The inside is reasonable enough to read, but the cover does the work no favours. Previous works by The Mercury Press alone were quite lovely, so I hope this isn’t an indication of the ongoing quality of book design and production by the combined The Mercury Press & Teksteditions.

it’s out of Port, Union, St. Thomas mumble
then that not even a word
could arrive. This frame, edges off a window
a cottage placed above Bill and Gail’s,
Dan’s, Murdo and Lou’s. Jimmy there closer still
by the lake, what can be seen through the fog gray
not a line comes clear, not that thin line
of demarcation, water, cloud
residence of pleasure
from chest pushing up,
out.