I met him in an airport last June. He was reading new poems by W.S. Merwin. In hardcover. A rare species! He’d been Lou Reed’s keyboard player, among other things, and said good poems helped him write songs. We talked until they called his flight, and the conversation left me giddy in the way travel should, but mostly doesn’t, now that we move about with our wires drooping. We stayed in touch. I read an article about him, learned he’d survived leukemia after a bone marrow transplant. In December he released a new solo album, which I downloaded and burned to a CD. It’s been kicking around the house for a while. I keep meaning to take it out to the car, listen to the whole thing on longer drives. Yesterday he posted that all his dates are cancelled for the foreseeable future. He’s in his 40s. The title track’s an earworm. When leukemia killed my daughter’s friend at sixteen, I wasn’t much help, called it unfair and she agreed, cried into my neck. He was beautiful, and open as the day.

There is something incredibly compelling about Canadian expat Julie Bruck’s new poetry collection, How to Avoid Huge Ships (London ON: Brick Books, 2018), something that keeps drawing me in and holding my attention. While I’m not normally attracted to this particular strain of narrative lyric, her lines are magnetic. Her poems evoke and evade, deceptively set as small stories or small scenes, but weaving in observation, surprise and deep meditation. Her poems have both an ease and a density, and a physicality to them, as she writes to open the poem “THE COLD”: “Despite seven—no, eight—months / of steroid sprays, antibiotics, antibacterials, / and whatever else modern medicine has / flung at it, the cold that finally killed my father / lives on in me.” 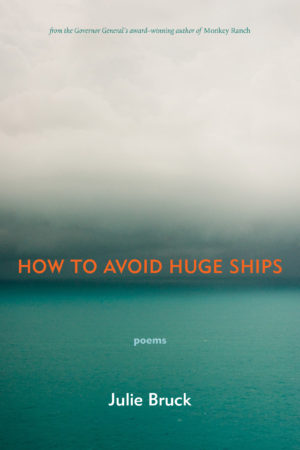 How to Avoid Huge Ships is Bruck’s fourth full-length title, after The Woman Downstairs (1993), The End of Travel (1999) and the Governor General’s Award-winning Monkey Ranch (2012), all of which have been produced by Brick Books. These are poems that evoke both loss and grief while allowing for a kind of zen appreciation of her subjects, writing out grief even as her narrator(s) learn to allow that same grief to pass through the body. Moments, as John Newlove wrote, not monuments.

HOW TO AVOID HUGE SHIPS

In lieu of faith, there were books.
As my mother kept dying, I looked
things up, assembling a glossary
of hopeless causes, which occasioned
frequent walks to and from the branch
library. On the last day of January, I was
returning The Trauma of Everyday Life,
planning to borrow Orphaned Adults,
when I passed a brightly tattooed
young woman reading on her stoop.
I needed a sign, and she was deep
in The Dead Do Not Improve, so I
jettisoned my list of self-help titles,
those my father called guides
for the insane, and checked out
How to Avoid Huge Ships instead.
In Captain Trimmer’s most fervent
desire that this book serve as guide
and best friend when you find yourself
in a tight situation with a large ship,
I found some solace. Such lumbering
vessels, he remarks, are slow to turn.
They can be very difficult to stop.

Mongo, At The Moment said...

The idea of a book about avoiding huge ships seemed... well, weird. I mean, they're huge; you avoid them. Apparently, it's not that simple, which means other assumptions about daily life may also be incorrect.