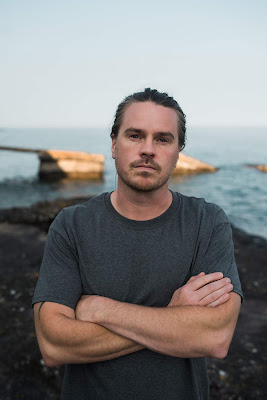 Ryan Vine’s debut full collection To Keep Him Hidden (Salmon, 2018) was a finalist for the May Swenson Prize, the New Issues Prize, the Crab Orchard Series, the MVP Prize from New Rivers Press, and—selected by Robert Pinsky—the Dorset Prize.

He’s received the Greensboro Review’s Robert Watson Poetry Prize, McKnight/ARAC Career Development Grants, an Artist Initiative Grant from the Minnesota State Arts Board, a Walter E. Dakin Fellowship in Poetry from the Sewanee Writers' Conference and has been a finalist or nominee for numerous other honors, including the Pushcart Prize.

Ryan is associate professor, a member of the Honors faculty and Chair of the English Department at the College of St. Scholastica in Duluth, MN.

My chapbook made me feel seen. I’d been serving tables and adjuncting after an MFA program and feeling mostly lost. When I got the call from Backwaters Press that Distant Engines had won a chapbook prize, I was—of course—elated. What a liberating experience for a young writer!

But I wonder if in a way it wasn’t damaging, too. I coasted for a while, I think. I celebrated for too long, I think. Over 10 years passed between my chapbook and To Keep Him Hidden.

Much has happened in the ten years it took to write the book, though. I was teaching full-time. I bought a house. I got married. I had a kid. I had another kid. I lost a good friend. I lost another good friend. I also moved to a more direct approach to my subject matter. I'm now closer to the poems I’m trying to write.

I grew up on Hip Hop. Hip Hop led me to poetry. I was fascinated with metaphor and wordplay. What kept me here, though, was the purity or intensity of expression I found in poetry. When I encountered Robert Bly and James Wright and William Stafford, it felt like I was hearing for the first time an older male speaking honestly to me, without fear or anger or whatever else muddies our most pure expressions.

On the good days, the poems are churning and rolling around just waiting to come out. Sometimes I’m brave enough to sit down and get some work done. On the bad days, there’s silence.

A poem never begins in the same way twice for me, it seems, so it’s hard to answer this one. I also have such a shitty memory; I wouldn’t be able to answer it honestly. Poems come from other poems; TV commercials; a big bunch of tiger lilies; my son on the sidewalk in front of me, about to kick a ball; an overheard conversation; music; dreams, etc., etc.. That’s one of the things I love about poetry. It seems limitless in the places it can both come from and take us to.

I used to enjoy doing readings. I do still enjoy the energy from a good crowd, but now I find the time before the reading (which can last sometimes for days) damaging. I don’t know, as I get older I try to avoid that kind of manic energy.

Work itself is the question. I mean, honestly, why do anything? Each successful poem is a tiny, new path in the direction opposite confusion and despair.

I think it’s essential. It’s difficult, sure, but writing is difficult. If it’s easy, as they say, you’re doing it wrong.

Because I teach full-time and am 50/50 on the kids with my wife (she’s a photographer), I have to take the time when it happens. Like right now: I’m writing on my butt in the piano teacher’s backyard in the shade of a big red pine. There’s a tiny, white moth climbing up through the grass. Leo, my 4 year old, is in the house banging out a wonky tune.

Also, the woods. I go for a run through the woods or a long walk (or a hike, as the hipsters like to say). Before I had children, I’d go get hammered. I mean, I’d really tie one on. What’s that the loggers used to say, burning out the grease? You gotta clean the lines once and a while.

I need my time in the woods. I’ve heard writers I admire say the woods are boring. My god, could you imagine? Terrifying, sure. Incomprehensible, you betcha. Beautiful, of course. But boring? What a bizarre sentiment.

John Berryman’s Dream Songs affected me deeply. So, too, has Maurice Manning’s work. Have you read Lawrence Booth’s Book of Visions or Bucolics or One Man’s Dark? There’s a music in Manning’s work which music barely rivals.

It’s been years since I’ve had a good nap.

I love to sing. I also play (quite poorly) guitar. I guess I’d busk?

The solitude. It’s like the only time of the day when I feel like I’m thinking for myself.

The Long-Shining Waters by Danielle Sosin. It’s a fantastic novel set on the shores of Lake Superior. I could go on and on about it.

Not sure if it’s great, but the BBC Documentary “HyperNormalisation” I saw last year scared the shit out of me.