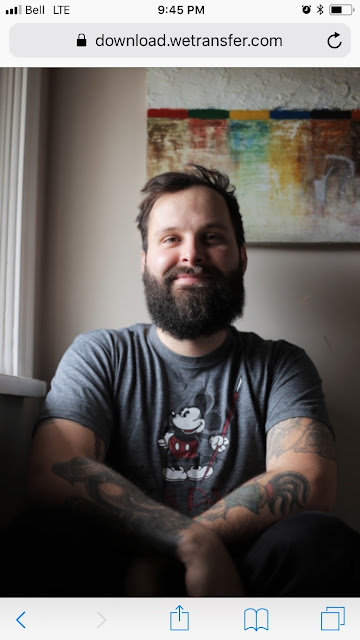 Benjamin Hertwig's debut book of poems was a finalist for the Governor General's Award, the Raymond Souster Award, and received the poetry prize at the Alberta Book Awards. He is the recipient of a National Magazine Award for non-fiction and his writing has appeared in The New York Times, Prairie Schooner, The Walrus, Maisonneuve, Event, and the Sun. He's working on a number of writing projects, all of which feel like they are floundering.

Before writing Slow War I didn’t think of myself as a writer, but the affirmation I received from friends and from people who read the book helped me think of myself as one. I stumbled into writing during difficult times and was fortunate enough to know some excellent and kind people who eased me into the process and the profession gently and with a lot of graciousness.

Poetry helped me to cover a lot of distance with fewer words than I could have with prose. I didn’t know how to create a larger literary structure, but poetry helped me find and follow a few bush trails of image and emotion.

It took me years before I felt ready to approach a longer project, but more recently there is less of a lag between awareness of an idea and starting to take notes/writing. I try and sit with my writing longer now than I used to though. When I started writing I sent things out to journals shortly after finishing them, and this sometimes resulted in poems that now feel unfinished.

My poetry is often autobiographical/confessional, so whatever I happen to be working through. I wouldn’t say I’m writing a book from the beginning, just writing whatever is there.

I don’t always love reading at or attending public readings, as I sometimes get pretty anxious in large crowds, but I generally feel really good after having done a reading, and even better when I’m back in a room by myself.  I try not to say no to readings, as I’m able, because I think it’s an honour to be asked.

I spend a lot of my time writing about war, so I guess I’m quite interested in the ways that war stories maintain or disrupt the status quo. Judith Butler’s Frames of War has helped me think about war stories specifically—and all narratives in general—in terms of grievability—that is, the ways in which lives are constructed as being worthy of grief, or not, and why.

I think good writing is fundamentally moral, even as it’s not didactic. A good writer expands our ability to engage with fear, uncertainty, injustice, humor. A good writer helps us treat our neighbours better and be more gentle with ourselves too. I think a good writer does not necessarily speak on behalf of specific communities, but participates within local and global conversations. A writer should be a good and generous neighbor.

10 - How easy has it been for you to move between genres (poetry to non-fiction to pottery to painting)? What do you see as the appeal?

Moving between art forms has been really beneficial for me. I’ve struggled with my health for a while, and switching forms works different parts of my body and my mind. Ceramics and painting help during the days or hours when my mind goes to places I don’t want it to go. The physicality of the forms are very grounding, both meditation and prayer.

I found a latte machine at a thrift store for twenty dollars, so I start my day with mediocre but inexpensive lattes and try and write for a few hours before noon, when I focus on my school work.

I just do something else for a while. Switch genres or spend more time with other mediums. I watch a lot of basketball too.

The smell of air following people in from the cold. Lilac in spring. Woodsmoke in winter. The tang of of Edmonton’s northside sewage treatment plant too.

Arvo Pärt and Georges Rouault are two artists who inspire and ground me.

I sort of apprenticed as a potter with my mum, who is a longtime potter, and I think I’d like to try and make it a life-long, part-time job.

I’m not sure the two are mutually exclusive, as I spend most of my day and much of my life not writing, but writing just felt healthy when I started taking it seriously. I felt good after doing it.

A book of short stories, a novel, a second book of poems, and a longer non-fiction project.