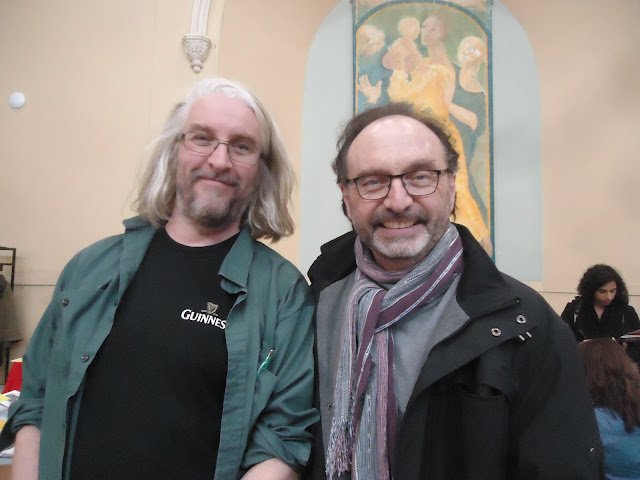 [myself and prior bpNichol Chapbook Award co-winner Gil McElroy] Further to my previous sets of notes (and, see, I’m writing about the ottawa small press book fair as well), here are some other items I picked up at the most recent edition of Toronto’s Indie Literary Market:

A A A A a all although any are as as at
being
catapulted coin common crowd
did
▪
feces first
▪
haze horror
I in intentional if if in into is is it
▪
know
language look
Marble may me money my
need
of of of of of On out
point proceed push
▪
refuse
sides single speed starting stem straight
that there this this throw to to truck
▪
▪
was we
▪
you?
▪

I’ve long been fond of Christakos’ engagement with language, regularly constructing manuscripts that play with sampling lines, phrases and entire poems from within (the above piece is reminiscent of that poet who reworked Robert Frost’s “Stopping by Woods on a Snowy Evening” as a sound poem, reading all the words of the poem in alphabetical order, included in PRISM International’s sound poetry issue somewhere around 1990 or so; who was it who did that?). A number of the phrases and short stanzas read as familiar, whether taken directly from her own social media postings or simply a further element of the same project in which she has been critiquing social media via social media platforms, and what social implications the growth of such mediums actually have. As she writes: “in a single horror / intentional although I / into a crowd. / is a language // Look at me [.]” Where might this project (somehow, this feels part of a larger, ongoing project, as opposed to a stand-alone chapbook-length work) end up? 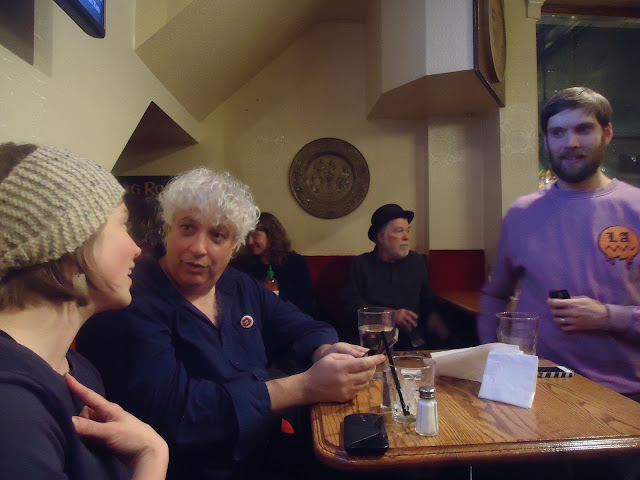 [a post-fair group that included (at least in this photo) Stuart Ross, Paul Dutton and Andrew Faulkner, among others]

Cobourg ON: I’ve been finding it curious lately to realize the amount of first chapbooks that Stuart Ross’ Proper Tales Press has been producing lately, from last year’s Those problems by Sarah Moses [see my review of such here] to more recent titles such as Allison Chisholm’s On The Count of One [see my review of such here] and London, Ontario/Victoria British Columbia poet Tom Prime’s a strange hospital (2017) (all three of whom, as well, he included in the first and last issue of his The Northern Testicle Review [see my review of such here]). Given the ways in which Ross releases chapbooks into the world, predominantly mentioning only on his blog and appearing at small press book fairs in Toronto and Ottawa (among others), it feels like the sort of thing that hasn’t yet been given due credit or attention (not that chapbooks are usually or often allowed either).

there is a
hole in
the side of my
head. I pick at it and
it grows—

it has
grown so large

there are trees,
flowers,

so large, a
moon orbits

What is interesting in this collection of sixteen short lyric poems is the hair’s-breath difference between the poems that work well enough, and the poems that move beyond that, as though there is nearly something intangible he manages to slip into certain poems, causing them to cling to the attention, bearing repeated readings. While this chapbook is a bit uneven, I am certainly curious to see what he might do next.