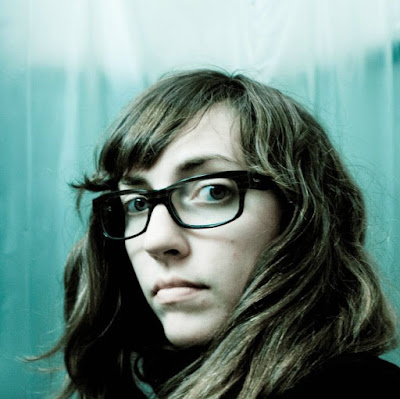 Brooke Ellsworth is author of Serenade (Octopus Books, 2017).  She lives and writes in Peekskill, NY.

1 - How did your first book or chapbook change your life? How does your most recent work compare to your previous? How does it feel different?
Most of Serenade was written in a frenzy during the late summer of 2014.  In many ways, it was more of me working out the tangles from my first two chapbooks, Thrown and Mud.  I press upon a lot of history of feminine brutality and eco-disaster, do a lot of urgent lineation around flood zones.  Serenade became some metacognition of me listening to water, while realizing this was a self-eroding reflection.  Serenade changed everything, because I let the editing process chip away at the poems’ temporality.  I was doing a lot of hiking around the tidal estuary surrounding Indian Point Energy Center.

2 - How did you come to poetry first, as opposed to, say, fiction or non-fiction?
I’m not sure.  I lineated my journals as a kid, which felt like the most personal and direct and private I could be.  My mom is a nurse.  As a kid I’d go to the hospital after school and type out occasional poems on their nurse’s station computer and tape them to the door.

3 - How long does it take to start any particular writing project? Does your writing initially come quickly, or is it a slow process? Do first drafts appear looking close to their final shape, or does your work come out of copious notes?
I write in fits, I guess.  I have trouble distinguishing between drafts and new poems.  An ongoing issue I have is re-writing everything, but keeping the same title.  The paradox of Theseus’s ship?  Maybe I should call this a liturgical listening process.  There are sequences of poems in all of my chapbooks and in Serenade under the same title.  I find arguments are most explicit when they’re lineated and slowed down.

4 - Where does a poem usually begin for you? Are you an author of short pieces that end up combining into a larger project, or are you working on a "book" from the very beginning?
I’m definitely more of a failed essayist than a poet.  I think of Serenade more of as a raging essay than I do a collection of poems.  I fixate on something and develop work in and out of that.

5 - Are public readings part of or counter to your creative process? Are you the sort of writer who enjoys doing readings?
I love audiences, and I love being a part of one.  Friends will tell you, I cry on either side of the stage.

6 - Do you have any theoretical concerns behind your writing? What kinds of questions are you trying to answer with your work? What do you even think the current questions are?
Serenade comes from a feminist/ecopoetic/angry place.  Lara Glenum writes in the introduction to the Gurlesque anthology that the concept of “catharsis” is a homogenizing agent.  All inherited ideas about catharsis = a failure of imagination to conceive of catharsis outside of the mechanics of power and control.  There’s no such thing as purity in art, outside of the modes of social and infrastructural displacement.  There’s nothing pure or timeless we gain access to through art.  This is especially important now, when this country actively neglects populations displaced by weather.  Artists and thinkers who are displaced by canonical narratives.  But do we pretend to forget history?  That in itself is a sad luxury.

I don’t answer any questions, but I definitely wallow in my obsessions.  The story of Echo shows up in Serenade, for one.  Echo is the main character in my first chapbook, Thrown.  Her inability to express her ecstasy, her sense of catharsis at the sight of Narcissus.  But she is certainly in this state of catharsis?  She communicates through her disability, which is the excess of repetition.  Poems traditionally come at you with a built-in sense of discovery, of some sort of awakening.  Poems like that for me are hand-in-hand with poems who have a project of dominance.  For me, Echo is part of an erotic dynamic conceived outside of the dynamics of control.  Which isn’t separate from her predetermined annihilation.  Derrida really tenderly talks about her story.  About how she subverts Hera’s punishment by making Narcissus’s language her own.

7 – What do you see the current role of the writer being in larger culture? Does s/he even have one? What do you think the role of the writer should be?
Putting together a book requires physical structure (walls, food, money).  The people I care about want to make books, or not, and keep their capital debt from destroying them.  Or the people I care about discuss carelessness with language and a divestment of literary arts interchangeably.  I’m also using “people” and “poets” interchangeably here.  The poets worth reading, the ones worth paying attention to, activate the complacent, or at least expose them.

Cecilia Vicuña on a Harriet blog post last year, “Language is Migrant,” writes about living under the Chilean dictator Pinochet: “Complex public conversation goes extinct. Maybe the extinction of playful free speech is related to the extinction of species we are causing as we speak.” Vicuña here matches ecological catastrophe with language. Often it’s thought that pain breaks down language, or that writing and art are in response to suffering. Vicuña inverts the locus of agencies. One cannot say that one catastrophe begets the other; our contemporary catastrophes saturate each other. Language and the material world seep together, annihilating each other through political and ecological catastrophe.  Look at the effort by dominating political forces to neglect flood zones or entire communities devastated by weather events, or colonialist war events (Marshall Islands comes to mind as a horrific intersection of all these things.  Here’s an article that goes into that a little bit).

By contrast, consider the terra we actively maintenance: the SUPERFUND site under Silicon Valley, where pipes and pumps suck thousands of gallons of contaminated water every hour from vast underground pools, which then gets shipped, treated, and burned in places like Oklahoma and Arizona, discharging waste in small towns and on a Native American reservation—all in the hope of making the water drinkable again and protecting workers of the tech giants such as Google and Symantec from toxic vapors. This toxic trail, like Echo’s (in)articulation, becomes an act of dispersement, a stain that seeps into the water supply that Narcissus gazes helplessly into. We cannot turn away from the reflection, we cannot turn away from language, nor can we turn away from the semantics of industrialized progress.

8 - Do you find the process of working with an outside editor difficult or essential (or both)?
Definitely both.  I’m pretty defensive about my choices, and I really value friends and editors who ask me questions in ways that open up the possibility for other choices.

9 - What is the best piece of advice you've heard (not necessarily given to you directly)?
Don’t eat sand.

10 - How easy has it been for you to move between genres (poetry to critical prose)? What do you see as the appeal?
I personally don’t benefit from their separation.

11 - What kind of writing routine do you tend to keep, or do you even have one? How does a typical day (for you) begin?
I do a lot of writing on my phone on trains.  I can be a typical house cat with my writing structures.  Consistently, in the mornings, in the same spot.

12 - When your writing gets stalled, where do you turn or return for (for lack of a better word) inspiration?
I turn back to Pessoa (all of them).  I re-read Hiromi Itō.  Hélène Cixous’ The Book of Promethea.  Everybody should read Brett Walker’s Toxic Archipelago: A History of Industrial Disease.  Also Vandana Shiva’s Staying Alive.

13 - What fragrance reminds you of home?
Chapstick.  Boat fuel.  The combination of pitch pine and cigarettes.

14 - David W. McFadden once said that books come from books, but are there any other forms that influence your work, whether nature, music, science or visual art?
I think it’s useful to know the rules for all these material realities and languages, in order to imagine better ways to build communities.

15 - What other writers or writings are important for your work, or simply your life outside of your work?
Anna Kavan wrote a book called Ice, which changed the trajectory of a section of Serenade afterwards.  Albert Camus’ American Diaries was a troubling, important read.  For a while, the 2nd section of Serenade bore an epigraph from his diaries (“Endless good weather.”).  It was maybe when I was reading it for the first time, but the way he wrote about his depression went deep for me.

16 - What would you like to do that you haven't yet done?
My response to this is a little NSFW.  So I’ll go with visit Lisbon so I can Instagram a picture of me with Pessoa’s statue.

17 - If you could pick any other occupation to attempt, what would it be? Or, alternately, what do you think you would have ended up doing had you not been a writer?
I’ve always been a writer.

18 - What made you write, as opposed to doing something else?
I mean, here in gig culture, we all do a lot of things to keep afloat.

20 - What are you currently working on?
The working title to my manuscript-in-progress is Disturbances.  It focuses more on invertebrates and depression.