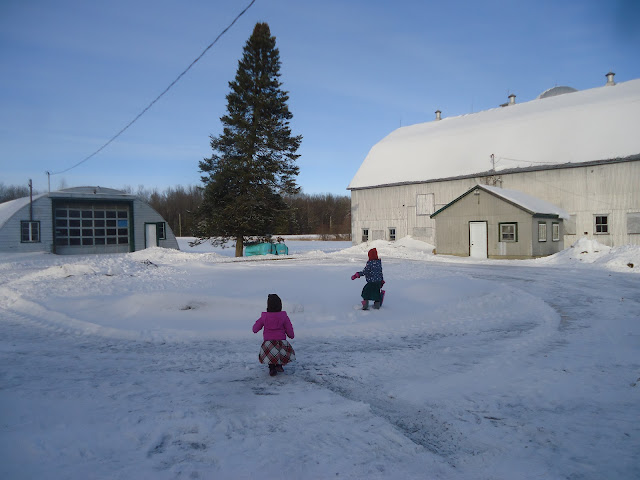 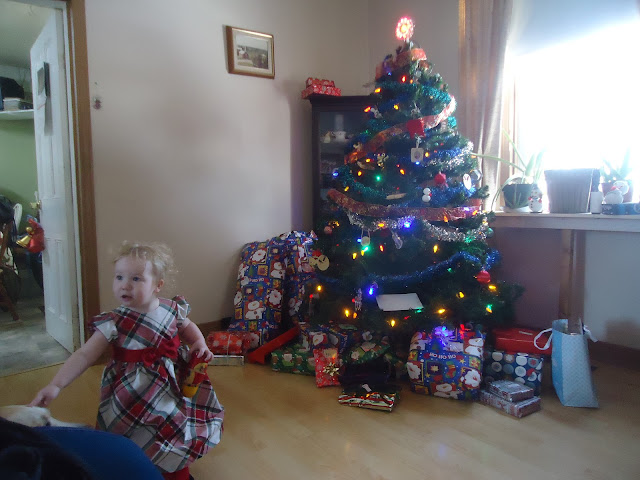 After our Christmas weekend in Montebello with father-in-law and his wife, we had a few more Christmassy things to engage in [see last year's post here].

December 24: We made our usual, annual jaunt to the farm for the sake of my father, sister and her brood, which are getting big enough that the eldest child is almost an adult (it would seem). Unfortunately, my daughter Kate wasn't able to make it this year due to work (she couldn't last year either, for similar reasons). When we first arrived, the girls ran around the yard in the snow, until they decided it was simply too cold.

Imagine: when I was small, that circle of snow in our yard (a driveway that circles to meet all the buildings, from shed to barn to shed to house) was where my father once put all the snow with the snowblower, making it a mound at least a storey high, which we then played upon. It hasn't been the same since he stopped doing that.

As we prepared for dinner, I amused myself by discovering a Hallowe'en cup in the cupboard (while attempting to find drinking cups for the girls) that actually held two dead spiders. God sakes.

Aoife in her red dress, who spent a great deal of time pointing at the dog and saying "dog," repeatedly. She hasn't really spent much time around dogs, but is less fearful than Rose (who doesn't care for dogs at all, up close). 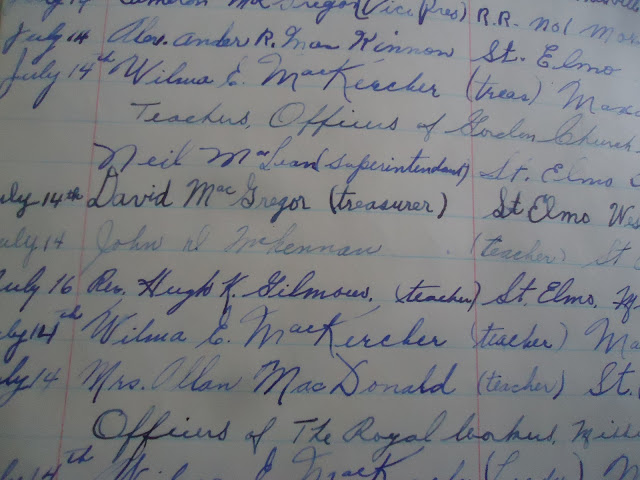 In the downstairs hall of the farmhouse, a ledger of "guests" from the St. Elmo Church gifted in 1939, that included my grandfather's signature (among many other family members, on both sides of my father's family, from McLennans to Campbells and beyond). I would like to spend further time going through the slim volume, if possible. 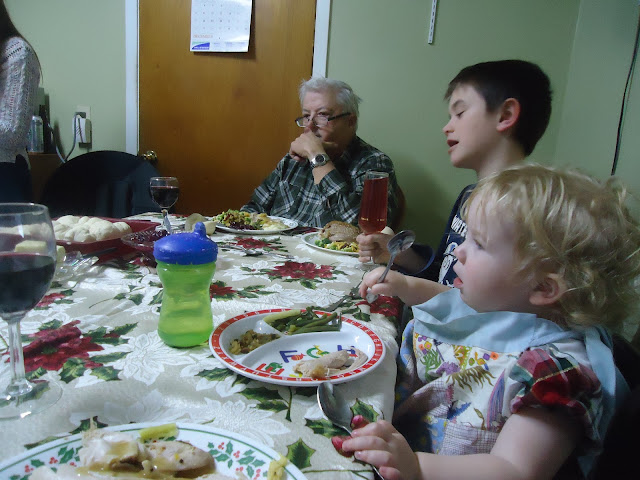 There were a lot to pack into the homestead's kitchen, but easier than trying to get us all into Kathy's house (which we've done also). Since we have a house, we've been taking turns with our Christmasses (given our house-chaos from basement flood, I'm glad we're next year and not this; our sunroom is still packed with boxes and furniture). Aoife had been feeling better after her fever the night prior, but by mid-afternoon was pretty much conked out, either adrift on my lap or Christine's (she went back and forth for some time). After some gifting post-dinner, we dosed her with medicine and tossed kit-and-kaboodle into the car for the ride home, where the sleeping-girls were both put to bed. Rose wore her Nutcracker Suite pajamas, and Aoife wore he reindeer pajamas, but I couldn't get photos of either of them.

I still find it strange how quickly the home-Christmas moves: I suppose I'm still used to so many years of going home for a few days or a week, instead of the half-day we currently do. It goes by so quickly. But then again, we've multiple Christmases now, so it pretty much evens out, except with more travel. 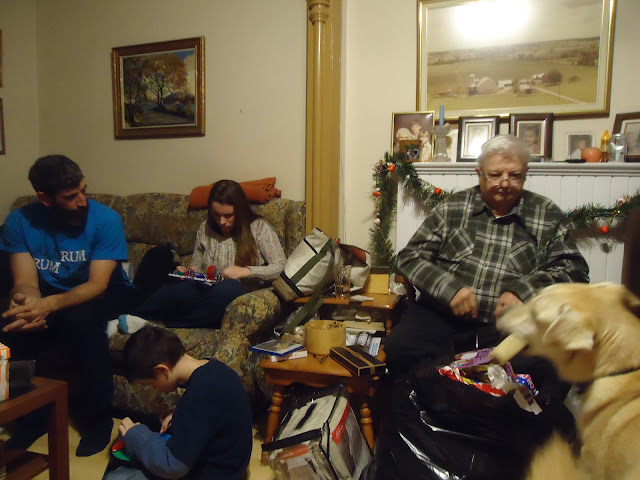 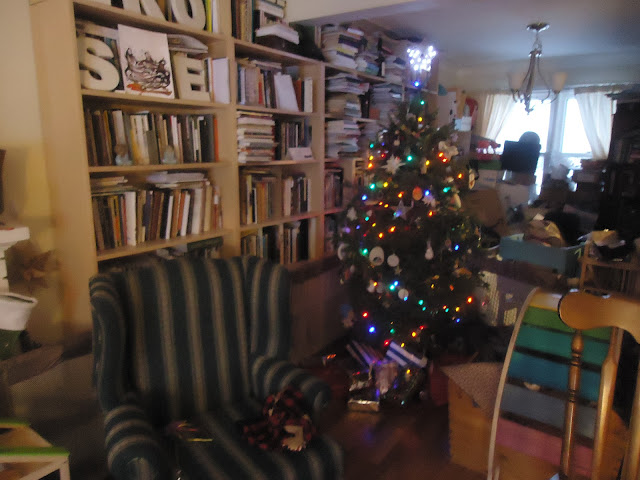 December 25: We awoke in our wee house, where we set the children loose to explore their stockings, and open the presents under the tree, managing to completely forget to feed them (or anyone) breakfast (they didn't notice either). They tore through stockings and presents, and ran around enjoying a variety of new items, as well as pulling items from the day prior from the box we'd left in the living room. Rose was quick to notice that Santa had, indeed, finished the milk and the cookies we'd left on the mantle (something we did before leaving for the farm, in case Rose was asleep when we returned). 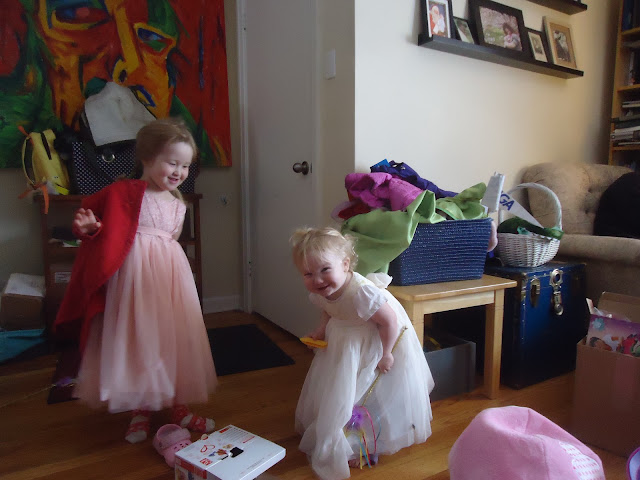 The girls were given princess dresses that they were both VERY pleased with: Rose is all about dresses and princesses, and we think Aoife just wants to be like Rose. Princess (Disney) dresses and fairy wands. As we prepared to head over to Oma's (mother-in-law's) for brunch, they wanted to bring half the house with them, it seemed. We attempted to reduce that as best we could. 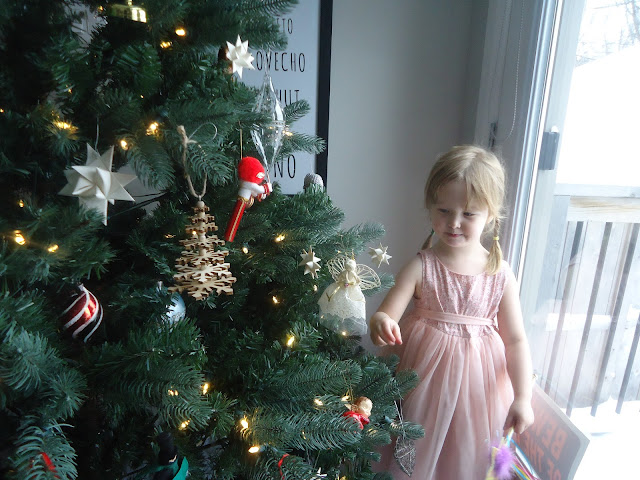 At Oma's house, they had cousins to play with, as Christine's brother Michael and his family live but a few blocks away. We were there first, by an hour or so, which allowed a bit of quiet(ish), as the girls ran around, between bites of cereal Oma had for them. Michael's mother-in-law, Darlene, was also there, admiring the girls in their new dresses. We had brunch and the children played and opened presents, before Michael and his family went home for the afternoon, for the sake of children naps; I napped upstairs with Aoife. And then dinner and the cousins returning and chaos again, before everyone began to pumpkin again, and we made it home with children asleep, once more, slipped into bed.

We would clean the wrapping paper and scattered toys from the floor, we said, tomorrow. Christine went out for a bit on Boxing Day, but the rest of us didn't leave the house.