this is how we are born: come morning
after we cypher/feast/hoop, we dig

a new one from the ground, take
him out his treebox, shake worms

from his braids. sometimes they’ll sing
a trapgod hymn (what a first breath!)

sometimes it’s they eye who lead
scanning for bonefleshed men in blue.

we say congrats, you’re a boy again!
we give him a durag, a bowl, a second chance.

we send him off to wander for a day
or ever, let him pick his new name.

that boy was Trayvon, now called RainKing.
that man Sean named himself i do, i do.

O, the imagination of a new reborn boy
but most of us settle on alive. (“summer, somewhere”)

Minneapolis poet Danez Smith’s second collection, after the award-winning [ insert ] boy (Portland OR: YesYes Books, 2014), is Don’t Call Us Dead (Minneapolis MN: Graywolf Press, 2017), a powerful collection of poems that work to reclaim both a physical and a cultural space in “an America,” as D.A. Powell writes in his back cover blurb, “that conspires against black, brown, queer, and trans bodies [.]” “i’ve left earth in search of darker planets,” he writes, to open the poem “dear white america,” a poem that encompasses the entirety of the strength of the collection for its display of intimacy and vulnerability, its savage critique and absolute shock and horror, and for its repeated and passionate pleas for safety, sanity and peace. He writes: “we did not ask to be part of your America (though are we not America?” The opening poem, “summer, somewhere,” is a twenty-page sequence that writes on shootings and young black boys, citing Trayvon and Sean, pleading for peace, and the upheavals of living in a country where black boys are shot and killed with disturbing regularity. As he writes: “don’t fret, we don’t die. they can’t kill / the boy on your shirt again.”

& even the black guy’s profie reads sorry, no black guys

imagine a tulip, upon seeing a garden full of tulips, sheds its petals in disgust, prays some bee will bring its pollen to a rose bush. imagine shadows longing for a room with light in every direction. you look in the mirror & see a man you refuse to love. small child sleeping near Clorox, dreaming of soap suds & milk, if no one has told you, you are beautiful & lovable & black & enough & so—you pretty you—am i. 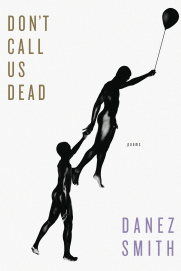 Part of the strength of this collection is in the way that Smith writes in such an open, intimate and unflinching way on how black men in America are seen and treated, half-threat and half-invisible, as well as from the perspective of living and loving openly as a gay black man. Don’t Call Us Dead is heartfelt and heartbreaking, uplifting and remarkable. In the same tenor as recent titles by American poets Layla Longsoldier [see my review of such here], Shane McCrae [see my review of such here], Eve L. Ewing [see my review of such here] and Morgan Parker [see my review of such here], Smith’s is a poetry of resistance, from proclaiming himself to actively resisting the false narratives so often constructed that continue to do an incredible amount of damage, both within and beyond the boundaries of America. His is a body that not only proclaims itself, but feels an enormous responsibility, for itself and those around him. In a recent interview conducted by Kaveh Akbar over at Divedapper, Smith writes:

I want to do more than talk beautifully about dead black people. I want to make sure black people stay alive. I’m hoping that’s where the conversation will go. I hope it can bridge beyond conversation into action. I don’t want the energy to just move on to the next thing.