He was born in Québec in the Abitibi region on September 28, 1943. Or he was born in Montréal. I have a photo of him on a second-floor balcony with his mom when he was eight months old. In Montréal, in NDG. She has a beautiful dress in the photo and he is smiling.

His father and mother had been colonists in the Abitibi region under the Plan de colonisation Vautrin. The life was hard there under the iron hand of the Church and they returned to Montréal either before or after the little man was born. Paul Émile. Their eldest. Later they had two more, Hélène and Jean. Paul Émile, despite his own difficult life, outlived them all.

His father, Yvan or Yvon, had had a corner store in Montréal, or worked in one, before going north as a colonist. It was the Depression. The church was promoting the salvation of the French-Canadian people via a return to the land. The curés ruled all aspects of life there. The family, like others, returned to the city broke, everything lost to them, and his father became a coach cleaner for the CPR. It was a dignified, union job. His mother was a housewife.

I wonder about the word “was,” the word “is.” To use either of them is like pushing a sewing needle through heavy material. Hide, or canvas. My thumbs hurt. (“What I Knew About the Little Man”)

Montreal writer, editor and translator Erín Moure’s latest book is the memoir Sitting Shiva on Minto Avenue, by Toots (Vancouver BC: New Star Books, 2017), a work I was fortunate enough to hear her read from in Edmonton during the University of Alberta writers-in-residence gathering in March, 2016 [see my post on such here]. As the back cover tells us, Sitting Shiva on Minto Avenue, by Toots “tells the story of a man who had no obituary and no funeral, and who would have left no trace if it weren’t for the woman he’d called Toots, who took everything she remembered of him and – for seven days – wrote it down.” Moure’s memoir is composed as a deeply personal and rather heartbreaking tribute to someone who had been very important to her for a very long time. Moure’s reminiscences are deeply touching, and move through what she knew of him, and their interactions, beginning in and around Vancouver’s Downtown Eastside in the late 1970s. As she writes:

Before I’d met him and before he’d had a steady job at CN as a waiter then steward, he’d had unemployed periods of bad alcoholism, and he had stories of the prostitutes and police, and of police mistreatment of the poor and intoxicated. Of being in the drunk tank and the police hosing them down because one person was shouting, and the impossibility of fighting against the force of water, being pushed across the floor by it.

Then let out, later, into the icy cold, with wet clothes. 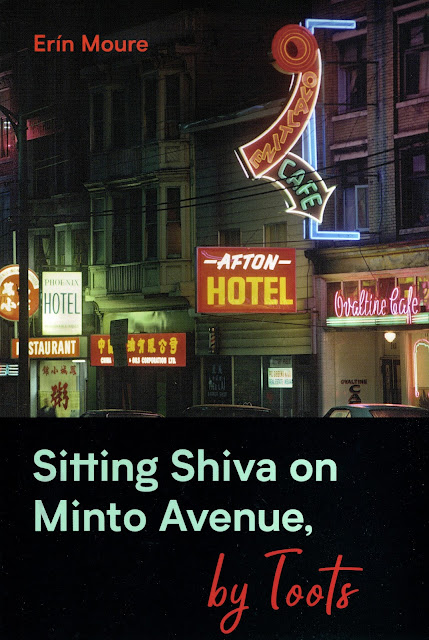 Moure writes openly of Paul’s difficult life, including his alcoholism, but also about his ongoing kindness and generosities towards those who required it, including many who hadn’t known much in the way of kindness. Written as a straightforward reminiscence, Moure’s tribute is remarkably present, writing out the process of mourning someone she had clearly been very close, against the minutae of her at her desk, writing her immediate against her recollections, allowing the narrative to emerge with an incredible ease.

Her memoir is reminiscent, slightly, of George Bowering’s memoir on his friend, the late London, Ontario artist Greg Curnoe: The Moustache: Memories of Greg Curnoe (Toronto ON: Coach House Press, 1993), a work that also began immediately after Curnoe’s death, composed as daily stand-alone sections until the manuscript accumulated. Bowering offered at the time that his project was influenced by Georges Perec’s infamous Je Me Souviens (1978) (a book that has since emerged in English translation), which was, itself, influenced by Joe Brainard’s I Remember (1975) (Perec’s book is also dedicated to Brainard). Moure, on her part, simply writes without such overt structure, focusing instead on the subject at hand, writing out as much as she can in a rather straight narrative. Early in her writing, she offers:

I don’t know what else to say but I will add to this later until it contains everything I remember about Paul Émile Savard.

His life was worth living and these moments are his legacy.