The first time my mother told me I was patient I nearly lost my mind because I thought she was telling me I was at that moment in the hospital as a patient even though I was in my bedroom. Then months later she and my dad gave my sister a keychain that read Patience in red and gold above the cutest, greenest turtle that you could possibly imagine. I was insanely, lustfully jealous of this keychain. My eyes watered and I asked my parents why I was not given the Patience key chain and said life was not fair and it took forever for them to explain that patience was not the particular virtue I had to work on. Maybe I had to work on the crying or the jealousy or on the phonics skills. They said Molly had to work on her patience. I thought that if I’m so good at patience, then I should be given the keychain as a reward. But that’s not how the pedagogy of parenting works. Parents don’t get it. I’m still waiting for my fucking keychain. But McConaughey’s lecture? He just says patience twice. He says “Patience. Patience.” (“Broadax”) 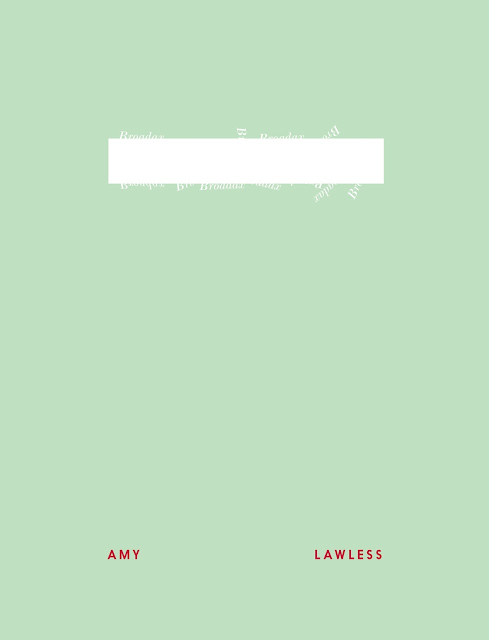 I’ve been an admirer of the work of Brooklyn poet Amy Lawless ever since picking up a copy of her second poetry collection, My Dead (Octopus Books, 2013) [see my review of such here], a follow-up to her first collection, Noctis Licentia (Black Maze Books, 2008). Her latest, Broadax (Octopus Books, 2017), is a collection that focuses on the prose poem, working as individual pieces grouped together in sequence, as well as through extended suites. I’m fascinated by Lawless’ exploration of the sentence, through both the prose poem and more traditional-looking lyric pieces, and the accumulations, narratives and threads she builds across the length and breadth of Broadax, from dream-sequences, memoir-esque recollections and surreal constructions, with an odd humour that threads throughout. Lawless writes on a variety of subjects, including her relationship with her sister during childhood, a fear of The Incredible Hulk and male rage, and observations on death, lovers and birds. Smart as hell and densely packed, this is easily her strongest work to date, and Lawless’ observations often contain the force of a punch, yet manage to impact without overwhelm. While some of these pieces are as raw as the bone, Lawless writes of rage from an odd distance, recording the details of dark feelings and experiences akin to a journalist embedded with the troops, with one foot on the shore even as the body might be caught up in the ensuing flood. “When the wolf and the deer look at each other,” she writes, opening the first poem titled “The Private Lives of Deer” (composed as multiple poems in sequence sharing the same title), “they both like what they see.”

Sometimes a deer and a wolf combine to form a new being—a being I can’t pretend to have the authority or the tools to name. Deolf? See? That was terrible. Remember when that car was chasing you and trying to run you over? As you tired you turned around almost ready to give up, and you saw that you were driving the car. Talk about a mindfuck. Before falling asleep, put a mirror on the ground so that when you’re on the ceiling you can see yourself during lucid dreaming. There is no need to be afraid. No need at all. A grandiose idea sounds like the bump of a lover falling out of bed in the middle of the night.