here this canna lily medicine ornament
for use on a journey

mouthful of water a liquid gem

lead in the blood of your children

feathers incline in planes side by signal

encased I fly some thousands of miles home my life 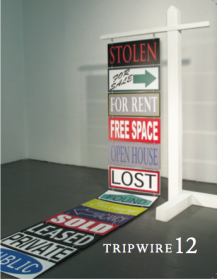 I’m very taken with the issue #12 of David Buuck’s Tripwire out of Oakland, California, constructed as a hefty feature on Vancouver writing, “AKA VANCOUVER: WRITING FROM THE UNCEDED COAST SALISH TERRITORIES.” The opening section includes an absolute ton of new writing (and some visual art as well) from Mercedes Eng, Anahita Jamali Rad, Amy De’ath, Cecily Nicholson, Danielle LaFrance, ryan fitzpatrick, Roger Farr, Sonnet L’Abbé, Phinder Dulai, Jordan Abel, Rita Wong, Stephen Collis, Andrea Creamer, Fred Wah, Jeff Derksen, Christine Leclerc, Carolyn Richard, Donato Mancini, Renée Sarojini Saklikar, Lawrence Yzhak Braithwaite and Tiziana La Melia & Vanessa Disler. The works included in this list are just incredible, and represent some of the finest contemporary poetry to come out of Vancouver, and a list of writers and writing that you need to be paying attention to right now. And, while I agree that the work should stand for itself, I still would have liked to see an introduction of some sort to the section, just to have a sense of the framing of this section of nearly one hundred and sixty pages of writing and photography from Vancouver. How was this issue compiled? Etc.

Focusing heavily on the intersections between language and political poetry that have been building in Vancouver for quite a long time, it is important to note that editor/publisher David Buuck is also engaged in an ongoing activism, both in and beyond his own poetry, such as his participation in BARGE — The Bay Area Research Group in Enviro-aesthetics. One might say that Oakland, California and Vancouver, British Columbia exist as sibling-communities, given their shared aesthetic of experimental writing and activism.

My life is a ferris wheel. Chairs rotating around a pin. I’ve never known true happiness, true compassion for another person. I can applaud the architectural firm that made this sentence possible, though I find it hard to think at this level for long

The poets are coming. The Avant-Garde is Coming. We all need our vices. I want to break the fourth wall. THEY should pay our tabs.

I suffer like you have no idea. You can help me with this. Every thing I have done is because of an injury. Give me a smile. Not so big.

Now think of “the Social” as a waiting room, in a Care Facility, by the beach, under construction, one minute past Happy Hour. (Roger Farr, “from The Care Facility”)

Further into this Vancouver issue, Tripwire #12 includes sixty pages of a tribute to the late Nanaimo, British Columbia poet Peter Culley (1958-2015) [see my obituary for him here], including uncollected writings, essays on his work, remembrances, an interview, archival material and other pieces, by Culley himself as well as Elisa Ferrari, Louis Cabri, Colin Smith, Rolf Maurer, George Bowering, Lisa Robertson, Chris Nealon, Lee Ann Brown, Stephen Collis and Jonathan Skinner. One of the first pieces to really strike in this section has to be Rolf Maurer’s short essay-reminiscence, “Peter Culley, Pleasure Poet,” that provides both homage and overview of Culley’s work and life in and around Vancouver:

Peter Culley emerged from, instead of into, the West Coast literary mainstream, in the early 1980s. Jack Hodgins had been a high school teacher, and early mentor; the painter Mina Totino and the poet Kevin Davies were classmates. His elders saw Culley’s promise and his first book was named Twenty-One in part beause that’s what he was when Oolichan Books issued it. Culley later more or less disowned that book, not because of any bad publishing experience, but because even as it was going to the printer his poetry was turning away from the first-person I of those poems to the camera I at the centre of all his later work.

For his part, Louis Cabri includes materials from Culley’s reading in Ottawa in 1991, via Cabri and Rob Manery. Cabri writes:

In Ottawa, Ontario, Rob Manery and I ran, with our poetry magazine, hole, a poetry event series called The Transparency Machine, and Peter Culley presented in it on Nov 2, 1991, at Gallery 101. Peter selected texts to contextualize his poetry (this was the simple idea of the series), and we distributed those texts in newsletter form weeks before his event. The event was an informal discussion during which Peter projected his texts with the aid of an overhead projector. What follows are the invitation card to Peter’s event, three of his six selected texts including from his 1987 chapbook Natural History (after Gilbert White) (Fissure Books, ed Susan Lord), and a photo Rob took of Peter reading. The Transparency Machine event series idea has continue over the decades under different names and in other cities, most recently in Vancouver through the Kootenay School of Writing with additional help by co-curators Ted Byrne, Listen Chen, Dorothy Trujillo Lusk, Donato Mancini, Cecily Nicholson, and UNIT/PITT Projects.

To round out the issue, there is an impressive mound of further pieces, including a conversation between David Buuck and Danielle LaFrance and Anahita Jamali Rad on their former collective/journal, About a Bicycle, and critical pieces on works by Cecily Nicholson, Mercedes Eng, Lisa Robertson, Catriona Strang, Jordan Scott, Jordan Abel (two pieces: including one by me) and Colin Smith. I’m deeply impressed by the heft and thoroughness of this Vancouver feature, perhaps the finest I’ve seen in a journal in some time.

And, as Buuck reminded me recently, the first ten issues are available on the Tripwire website as free downloadable pdfs.