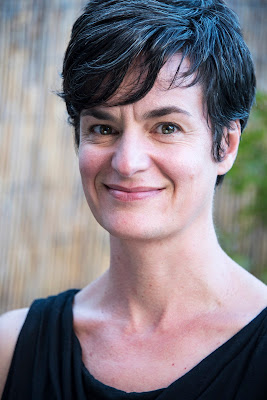 Allison Cobb is the author of Born2 (Chax Press); Green-Wood (Factory School); Plastic: an autobiography (Essay Press EP series); and After We All Died (Ahsahta Press), which was a finalist for the National Poetry Series. She works for the Environmental Defense Fund and lives in Portland, Oregon, where she co-curates The Switch reading, art, and performance series.

1 - How did your first book change your life? How does your most recent work compare to your previous? How does it feel different?
My first book didn’t change my life. I kept working everyday—both to make a living and to be a poet. I guess it changed my life in the sense that it signaled that someone was interested enough in my work to publish a whole book of it! (In that case, it was Charles Alexander at Chax Press.)  So that very likely gave me the hope to keep writing, despite the fact that everything in capitalism acts against non-monetizable creative pursuits.

This new book, After We All Died, is quite different from the previous two in that it consists mostly of shorter, individual poems. My previous books, Born2 and Green-Wood, consist of longer, documentary pieces. It usually takes me years to write a book, but the poems in After We All Died flowed out of me very quickly with the urgency of grief, and rage.

2 - How did you come to poetry first, as opposed to, say, fiction or non-fiction?
I didn’t come to poetry first. As a child I wrote stories. I didn’t know that living people wrote poetry; I had no models for that. I think what drew me to poetry later was its music—its ability to compress thought and feeling into a mysterious musical unit of duration. One of the first poems I loved was Roethke’s “I knew a woman”—of course, in this piece the poet is male and the female is the muse. I wanted to be the poet—to do those things with language.

3 - How long does it take to start any particular writing project? Does your writing initially come quickly, or is it a slow process? Do first drafts appear looking close to their final shape, or does your work come out of copious notes?
It can take me years to write around or toward a project. I do research, take notes, labor over multiple drafts, often transforming whole manuscripts away from their original shapes. That’s what happened with my second book, Green-Wood, which started out as a much more lyrical poetry manuscript and became a book-length documentary piece. But the new book, After We All Died, was different. Many of the poems there appeared in close to their final shape.

4 - Where does a poem usually begin for you? Are you an author of short pieces that end up combining into a larger project, or are you working on a "book" from the very beginning?
I’m working on a book from the beginning. There’s a wholeness of a project that comes to inhabit me and impel me forward. But within that larger project are shorter pieces that cohere. Each discrete piece often starts in sound, a rhythm—almost a feeling—that words then begin to form inside. The rhythm impels the words as much as the other way around.

5 - Are public readings part of or counter to your creative process? Are you the sort of writer who enjoys doing readings?
I love to read but it also exhausts me. I feel very vulnerable when I’m reading—like I’ve taken off my skin and turned it inside out for a group of strangers. I don’t typically use readings to inform my drafts—I prefer to read pieces I consider finished, by which I mean, it feels like the poem is succeeding on its terms. But each reading is still different because of the audience, the space, the time—so each piece comes alive in a different way at each reading, and I learn a lot from that, and I love that circular energy of creation among reader and audience.

6 - Do you have any theoretical concerns behind your writing? What kinds of questions are you trying to answer with your work? What do you even think the current questions are?
I’m interested in breaking apart linguistic constructs that form reality(ies) to reveal their constructed nature and create space for imagining—and speaking—something else. As a queer person, as a person who works in the environment field and carries an acute awareness of the destructive trajectory of the human species, this space feels essential to me for survival. I think an always important question is “How to think something different from what is?”

7 – What do you see the current role of the writer being in larger culture? Does s/he even have one? What do you think the role of the writer should be?
I’m with Ursula Le Guin on this, so I’ll just quote from her speech at the 2014 National Book Awards:  "Hard times are coming, when we’ll be wanting the voices of writers who can see alternatives to how we live now, can see through our fear-stricken society and its obsessive technologies to other ways of being, and even imagine real grounds for hope. We’ll need writers who can remember freedom – poets, visionaries — realists of a larger reality …. We live in capitalism, its power seems inescapable – but then, so did the divine right of kings. Any human power can be resisted and changed by human beings. Resistance and change often begin in art."

8 - Do you find the process of working with an outside editor difficult or essential (or both)?
Well it depends on the editor. The chance to work with a skilled and sensitive editor is a total gift. And I do think editing is essential. I write professionally for an environmental organization, and everything I write in that capacity is edited, so I have not only developed a thick skin around that, I also have come to deeply understand its value. I think of a skilled editor as one who can tune-in to the impulses in the work and refine and bring them out—or say when a piece has gone off track. An insensitive editor, on the other hand, imposes their own vision, language, and rhythms, and that of course can be very destructive. That’s why I feel so lucky to have close readers and editors whom I trust. But I’d also always like to widen the circle of people willing to engage with my work in that way—it’s a difficult thing to ask for though, because like so much else in the poetry world, it’s unpaid labor.

9 - What is the best piece of advice you've heard (not necessarily given to you directly)?
I learned in graduate school that Bernadette Mayer said if you write for a short bit (like 15 minutes) every day, and then spend one weekend a month refining and working on what you’ve written, by the end of a year you’ll have a book. It makes the mystery of generating poetry seem so possible, and I’ve maintained her daily writing practice my whole life—though composition for me doesn’t really follow the one weekend a month rule!

10 - How easy has it been for you to move between genres (poetry to critical prose)? What do you see as the appeal?
I move a lot between creative (not critical) prose and poetry—much of my work looks like what people consider prose, in that it’s not lineated. To me, though, it’s still all about rhythm. A prose rhythm can allow different things to happen than in a lineated poem—more declarative kinds of sentences, more sustained development, or unraveling, of ideas, more jarring juxtapositions. Because readers expect certain things to happen in prose—like an authoritative voice, a coherent logic, or a narrative arc—it’s powerful to use prose to undercut those expectations.

11 - What kind of writing routine do you tend to keep, or do you even have one? How does a typical day (for you) begin?
Let’s say how an ideal day begins—because I often don’t meet this ideal: Wake at 6, meditate for 15 minutes, freewrite for 10 minutes, spend 30 minutes reading poems by several of my favorite writers—dipping in and out of their books. Spend an hour with the page—letting anything that happens unfold. A poem may appear or it may not.

12 - When your writing gets stalled, where do you turn or return for (for lack of a better word) inspiration?
I turn to other poets. I also read lots of nonfiction—science, philosophy, history—and get very excited by ideas. But I am inspired directly to write by other poets.

13 - What fragrance reminds you of home?
Warm dry dirt and ponderosa pine in sun.

14 - David W. McFadden once said that books come from books, but are there any other forms that influence your work, whether nature, music, science or visual art?
I’m the daughter of a nuclear physicist and grew up in Los Alamos—the town where the atomic bombs were created—so the institutions and language of science constantly haunt my work. I’m influenced by pop music as well—how it distills desire, and attitude, and ache.

15 - What other writers or writings are important for your work, or simply your life outside of your work?
Alice Notley sits at the top of my pantheon of contemporary poets. Susan Howe for how she fuses history and lyric. Audre Lorde for her visionary poetics and prose. Emily Dickinson for her vastness. Rilke for being Rilke. Jen Coleman for being my partner and reader for so many years, and for being a great poet in her own right. And then a whole slew of my contemporaries and younger poets who really excite me: Susan Landers, Anne Boyer, Maged Zaher, CAConrad, Jennifer Tamayo, Joyelle McSweeney, Dana Ward, Brandon Brown, Adjua Greaves—too many to name!

16 - What would you like to do that you haven't yet done?
I want to live as much as possible outside of my own familiar zones. That means traveling, which is a privilege, of course. But I agree with what Carolyn Forché said recently in an interview: For U.S. citizens, "our isolation, our geographic isolation, linguistic isolation, is profound.” But there is also isolation within the U.S. I’m isolated within my white, middle class bubble. I think it's critical to work against that.

17 - If you could pick any other occupation to attempt, what would it be? Or, alternately, what do you think you would have ended up doing had you not been a writer?
I never had any idea of being anything but a writer. Well, professional baseball player and then professional figure skater when I was young, but neither of those were very realistic! If I could sing—if I could use my body to communicate meaning in sound and language the way someone like Johnny Cash or Billie Holiday could—I’d obviously do that.

18 - What made you write, as opposed to doing something else?
It was the only thing I cared about and felt skilled at.

19 - What was the last great book you read? What was the last great film?
The book Culture of One by Alice Notley. And, this is not a film, but a live performance: In November, right after the election, I went to see Alice Notley read all of Descent of Alette over two nights at the Lab in San Francisco, which by the way is an endangered art space in the Mission. The event was created by Steve Dickison and Steven Seidenberg. It was an absolutely incredible performance, and timely, because that book is all about the journey to overthrow a tyrant. By the end of it, Alice was weeping. The crowd leapt to its feet, clapping. Then, we all sat back down and this thick silence settled over us. I felt like we were coming to terms with the fact that this is a journey each one of us must now take. It was one of those performances that leaves you feeling completely transformed.

20 - What are you currently working on?
At the moment, I have no idea!