THE ONE WHERE THE GANG GETS BACK TOGETHER

The one where human community over-powers animal.

The one where H.S. recognizes a common strangeness, a common sweetness, a fundamental separation.

The one where the insulted experiences language and I relate to collaborative hating.

The one where friendship is not property of a subject and my eyes are bigger than my stomach.

The one with the puny face of existence.

The one where “women can very well enter into a friendship with a man, but to maintain it a little physical antipathy must help out.”

The one where I kissed the ground beneath his feet.

The one where “one always loses by all-too-intimate association with women and friends; and sometimes one loses the pearl of life in the process.”

The one with bras before brahs. 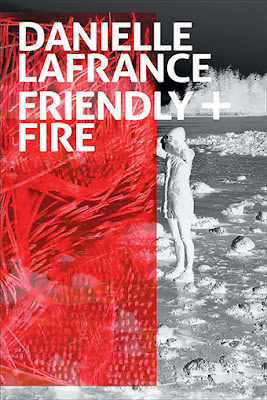 Vancouver poet and editor Danielle LaFrance’s second trade poetry collection, after Species Branding (Vancouver BC: CUE, 2010) is Friendly + Fire (Vancouver BC: Talonbooks, 2016). As Rachel Zolf’s blurb on the back cover attests, “Friendly + Fire starts out as a caustic linguistic interrogation of the 2002 Tarnak Farm Incident, in which U.S. airman Major Harry ‘Psycho’ Schmidt, hopped up on amphetamine ‘go’ pills, placed his ‘finger on the pickle’ (trigger) and dropped a 500-pound bomb on a Canadian military exercise outside Kandahar, Afghanistan. It then turns into a seething, deconstructive indictment of the heteropatriarchal, capitalist-colonialist structure of the friend-enemy binary itself as it plays out in social relations in the ‘society of the receptacle,’ in the academy, in poetry circles, in the street, in the bedroom, and in the structure of the split speaking ‘I’ itself.” As far as quotes or blurbs go, Zolf’s assessment of the book is incredibly astute and precise. LaFrance’s Friendly + Fire is composed out of an aesthetic of war and friendship, intimacy and accidents of upheaval, whether political, social or personal, writing out the specifics of armed conflict and intimate acts. Hers is a critique of multiple systems, as well as her own actions, and each thread throughout the collection, interweaving and occasionally getting (deliberately) tangled. In LaFrance’s poems, colours and contexts blend. As she writes in the poem “STOP REFERRING TO SOLDIERS AS HEROES”: “Why don’t I want to hear about my self-esteem? Why is the best way the / hardest? Why do I have to fuck with everything?”

NOBODY WANTS TO TALK ABOUT IT

“Friendly” + “Fire” is a combination move played in the subtropical arid deserts. But nobody wants to talk about it. These syntagmas are thought through with due diligence. Always one step behind. There is no female purity in the relationship between adjective and noun. A slip of the tongue is the original form of the times OR archived missives on the Internet. Circumlocute the vanguard of misconception and quickly re-enter the confessional booth as a messed-up blood metaphor. Yesterday means caffeine pills. Specialized commandos and civilized condominiums. Electric flow from my pussy chakra to my mouth apparatus. Just like Honey. H.S. is a damn lovely soul with whom I share my most intimate thoughts and desires for the future. Do away with all burnt flesh or my drishti will be caught in REAL UNREAL purgatory.

What is H.S. saying about female agency?

All radical being and such a beautiful person…