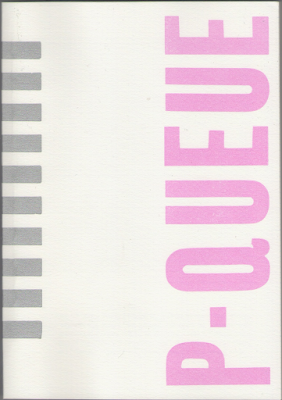 Anyone following this site for a long enough time will know that I’m a big fan of the annual P-QUEUE, a journal out of SUNY Buffalo [see my review of #7-8 here; my review of #5 here]. I might be a bit behind on everything these days, but I recently came into possession of issues #10-13 (2013-16) and couldn’t be more excited.

What I’ve long appreciated about P-QUEUE is the range of work included. As further evidenced by these four volumes, there is real curatorial thought in the way issues are constructed, including challenging and deeply-engaged (politically, structurally, etcetera) works by a variety of writers from the emerging to the more established, predominantly including longer works (whether excerpts of book-length projects or otherwise) that might not have found homes as easily in trade journals. Given that the journal is produced through the English Department at SUNY Buffalo, much of the work featured is a vibrant mix that includes visuals and language poetry, and often includes a great deal of work by younger writers, including a number with either two or fewer books to their credit. In that way, P-QUEUE is a great opportunity to be introduced to numerous writers that might yet not have achieved a larger attention. As editor Joey Yearous-Algozin writes in his editorial in the tenth volume, “Letter to the Co-Editor”:

Now in its tenth year, P-QUEUE has proven surprisingly resilient. Exceeding its institutional status, it remains a node at the intersection of disparate poetic practices and aesthetic engagements. Instead of stalking out a specific aesthetic territory in our curatorial decisions over the last three years, what has spurred our interest as editors is how we could limit our deviation from the consistency of P-QUEUE’s in-house design. In this way, using the format we inherited from previous editors as our constraint functioned as a tool for our critical engagement, working with a set of increasingly obsolete variables—letterpressed cover, lettrines, ornate serif fonts. Since we have always planned to pass on P-QUEUE after editing this volume, we’ve come to recognize our own place among this list of variables. As such, we can now say that our attention to the journal’s formal continuity has gone beyond imitation or aesthetic allegiance, towards reading obsolescence as embedded in our editorial practice.

Volume #10 (subtitled “obsolescence”) features work by Aaron Winslow, Kim Rosenfield, James Sherry, Amanda Montei, Rod Smith, Jon Rutzmoser, Feliz Lucia Molina, Astrid Lorange, Jeremiah Rush Bowen, Lanny Jordan Jackson, Judith Goldman, J. Gordon Faylor, AMJ Crawford, Angela Genusa and Diana Hamilton. The final issue in a three-issue block co-edited by Holly Melgard and Joey Yearous-Algozin, this is the largest of these four issues at some two hundred and twenty pages (wishing I had a copy of the previous issue, for the sake of comparison). Highlights of this issue include Rod Smith’s sequence “The Rothko Poems,” Jon Rutzmoser’s photo/poem-sequence “not yet / not yet / not yet” (which is really quite striking and difficult to explain easily) and Buffalo poet Judith Goldman’s “untitled” poems, that include:

easy to scale size of the lettering

To ensure readability and in service to the story

make the text a bit smaller

to fit in word balloons

Or: Denoting speech bubbles through the water that

caption lettering for captions, thoughts, and so forth

By nature of the exclamation point, to indicate shouting (Judith Goldman)

The issue also includes an excerpt of “The Wes Letters,” an epistolary novel that was published in 2014 through Outpost19. As Feliz Lucia Molina’s brief introduction to the section reads:

The following excerpts are from The Wes Letters, a forthcoming book-length epistolary novel between Ben Segal, Brett Zehner, and myself. (January 2012-September 2012).

Brett Zehner encountered Wes Anderson on a train traveling from Chicago to California. Ben and me suggested Brett write to Wes. Then all three of us started writing to Wes. The collection of letters was completed at Mustarinda House in a remote bear forest in northeast Finland.

I’m curious about this small novel, admittedly. However odd it might seem.

I’m sitting on our living room futon while Brett explains the situation of meeting you on the train. Apparently the person you were with writes children books. I hear words like aristocracy and kings. Our friend asks him questions like “did you tell him it’s ‘HUN-day’?” Apparently you and your girlfriend asked Brett what he reads and what he thinks about trains. Obviously you and Brett have a lot in common. How romantic, Wes, especially on a train while sipping chardonnay, poking at your duck, and talking about literature.

Brett says it was a beautiful conversation. I think he thinks it was beautiful because you guys talked vaguely about books and he said he felt like a dick for dropping names. Funny he said dick, jue like Chris Kraus’ Dick. So you’re a-political? That’s great news. Since I was eighteen I felt weird for voting for some dude to run the whole country and felt bad when friends seemed disappointed I wasn’t ‘lefty-liberal’ enough.

I love you Wes, I’m starting to, despite all the distance.

I can feel the apartment grow wider and bigger because of you.

Volume #11 (subtitled “natality”) features work by Alli Warren, Joe Hall, Dolly Lemke, Angela Veronica Wong, Anne Boyer, Christine Wertheim, Kenyatta AC Hinkle, Kate Durbin, Elizabeth Hall and Holly Melgard. The first of a three-issue block edited by Amanda Montei (the back of Volume #13 announces that Allison Cardon begins as editor with Volume #14), she discusses in her introduction that she is working, as editor, to renew, to “establish our beginning.” She writes: “What we want so desperately is a new beginning.” It is no small thing to want to carve out your own space as editor when taking over an established journal, even while attempting to continue and expand upon the work that has already been done. She continues:

It is in the spirit of this impossible possibility that I want to inaugurate the second decade of P-QUEUE. The work in this eleventh volume wonders at the possibility of making present what we cannot see is every day made absent. It demands that we recognize that there is more than what is given, and in this way, these works act. After all, if –ity is the suffix used to form abstract nouns from adjectives, then natality is also the nouned natal, the quality or condition of being natal, being-as-natal, being-as-being-baby. Relating to the obvious fact of one’s birth, yes, but also to one’s Mother, one’s Mother’s tongue, one’s Mother’s body—a body Capital would have us just as soon forget. The works in this volume remind us that to act in this time, which has been both cruelly and generously gifted to us, requires we return to the body of the Mother, the reproducer of labor power, and of beginning, on whose invisible work the entire system rests. We return in this volume to the natal not in a nostalgic relation to the biological, but in an effort to question what the act of beginning might offer us here, at what looks so clearly like a futile confrontation with the end.

Some of the highlights might seem obvious, just from the list of contributors, from Alli Warren’s poems “from DON’T GO HOME WITH YOUR HEART ON,” an excerpt from Christine Wertheim’s “afterb|rth,” from Elizabeth Hall’s “I HAVE DEVOTED MY LIFE TO THE CLITORIS” and Anne Boyer’s “JOAN,” composed as a series of short prose-sections. The first paragraph of her “Joan Gets Married” reads:

There are also Dolly Lemke’s short lyrics, that include:

Continuing To Not Die

My affection
is that rusty stubborn thing

And before you descend
the mountain
in a hurried search

Know just what nourishment
is necessary

You didn’t hear me
whisper across the city

As I write this introduction, I am nine months pregnant. In my belly there is a little life squirming, uncomfortable with my position in this chair, and perhaps more so in this editorial role, at this time, when there is so much pain circulating not only within small press poetry communities, but more widely within the country. To be so close to the end here, as I complete this twelfth edition of P-QUEUE, is a kind of fatal mistake. I am somewhat removed, far inside my body in an attempt to make friends with it, and with this soon-to-be child, both body and baby ruling my current sense of time, place, distance. I am on the verge of a kind of subjective fatality, not just because motherhood functions as this kind of erasure, but because birth, that wave-like sitting with time, requires a giving up, a letting go, a radical waiting that shatters any sense of beginning and ending.

One of the obvious highlights of this issue has to be the nine numbered sonnets by Nikki Wallschlaeger, which are included in her CRAWLSPACE, due out in April with Bloof Books:

You need a permit to throw those black chicken bones honey
across the territory agog in studied hurricane lamps.
The pain management center is high on skin bleaching creams
I know I talk at you with tons of stories about waiting rooms
but you should know by now that tear gas guffaws everywhere.
Why ignore the elephant tied to the city center refugee camp
or the outland of red gingham hearts tricked out in razor wire
when I go out for the morning’s mail. Tell me that once.
Children, it’s time to scream for as long and as loud as you can
treading water in the crap thickets of an evaporating formula.
Rock music is as carefree as ever at respectably placed volumes,
They will play it wherever we are waiting for our descriptions
snifters of hooting community support reruns on the mounted telly
waiting for us to shuffle along, shuffle along, shuffle along (Nikki Wallschlaeger)

If I have made any effort during my tenure as editor—by tokenizing white men in jest, but also in earnest; by refusing a standard definition of the poetic, or the avant-; by shaking off the yoke of standardization and consistency; or by snubbing in passing the tradition of print and institutional support—it is to bring forth the laboring bodies that get lost in current paradigms of production. What capitalism and so-called democracy put to work, yes, but also what our so-called progressive institutions smuggle in. What real care, community, and revolutionary thought is lost in those gestures.

What gets filled in by the works in this volume, I think, is some of that lost loss.

Highlights here, as with prior issues, a-plenty, and this issue features work by the now-current editor, Allison Cardon; a sequence of fragments excerpted from a longer project, “OPEN QUESTIONS,” that includes:

it is evident that you ask

what room is there for revelation
to conjure with corners instinctive

who is he to have his
own
thoughts on the matter

Further highlights include thirteen poems by Carleen Tibbetts, an excerpt of “Globe Touching” by Stephanie Young, Becca Klaver’s essay “Don’t / Look Back: On Nostalgia, and an excerpt of Eleni Sikelianos’ “Make Yourself Happy.” As an admirer of Sikelianos’ ongoing work, I’m thrilled to see her included in this issue, I also take note that she might be the most established writer to fall into the pages of any of these four volumes. Her sequence includes:

So the animal’s ghost dance is
what we get

The next volume, which is scheduled, I would suspect, rather soon, will be incoming-editor Allison Cardon’s first. I am curious to see what she will do with hers.

As the back of each issue informs: “P-QUEUE is published annually, and accepts work year-round. See website for editorial guidelines and deadlines, but as a general rule, manuscripts must be received by December to make the following summer release.” For further information, either check the website, or send a submission directly to P-QUEUE, c/o Allison Cardon, 306 Clemens Hall, English Department, SUNY Buffalo, Buffalo NY 14260 USA.