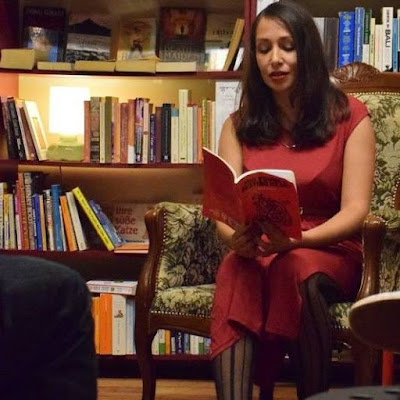 Nisha Bhakoo’s writing has been published in numerous literary magazines, and her poetry has been included in anthologies by The Emma Press and Mud Press. In 2015, she was shortlisted for Cambridge University’s Jane Martin Poetry Prize, and was awarded 3rd Prize in the Ledbury Festival Poetry Competition. She has showcased a selection of her poems at BAFTA, and had a two-week exhibition of her writing and poetry films at Rich Mix, London. She was also selected for GlogauAIR Artist Residency in Berlin in 2015. Her debut poetry collection, You found a beating heart, was published by The Onslaught Press in 2016.

1 - How did your first book change your life? How does your most recent work compare to your previous? How does it feel different?
Relief! A lot of the poems in You found a beating heart were written when I was in a pretty dark place, and although the process of writing them was very therapeutic, I felt a huge sense of relief when the book was published. I felt like I could start a fresh. I definitely see a change in the poems I’m writing now – they are less raw and more controlled, although they still have the same dreamy, uncanny and gothic qualities to them.

2 - How did you come to poetry first, as opposed to, say, fiction or non-fiction?
I have always scribbled down my thoughts, feelings or just strange phrases on paper since I was a teenager. I was obsessed with song lyrics when I was younger, not just the music, the lyrics were of equal importance to me. It was at around 15 that I started to look for poetry outside of the classroom.

3 - How long does it take to start any particular writing project? Does your writing initially come quickly, or is it a slow process? Do first drafts appear looking close to their final shape, or does your work come out of copious notes?
I can write poems very quickly. Some poems come to me in a matter of minutes, and I rarely change poems after a few days of writing the first draft. I feel like I should stay loyal to the particular headspace I was in when I wrote the poem. Even though they come quickly, the process of putting together a collection is quite slow. It takes time to put together a manuscript of poems that you want to publish. A lot of poems get discarded along the way.

Also, I am writing a novel now and even though I finished the first draft very quickly, I know the whole publishing process is going to be painfully slow. Many people don’t realize the length of time it takes to edit a piece, find an agent, edit again, then a publisher, then start the whole editing process once again. It can take years and years until the book is finally published.

4 - Where does a poem usually begin for you? Are you an author of short pieces that end up combining into a larger project, or are you working on a "book" from the very beginning?
I am always working towards a book, but I am aware that not every poem I write will end up being in the final manuscript. I think it’s important not to force things, the more you force, the harder it gets.

5 - Are public readings part of or counter to your creative process? Are you the sort of writer who enjoys doing readings?
My work is very personal and quite exposing but I try to agree to every reading I am offered because I think it’s an important thing to do, and even more so because it takes me out of my comfort zone. I also find that poems are so much more powerful when read by the poet, just the act of reading a poem out loud can change the tone or meaning of the poem.

6 - Do you have any theoretical concerns behind your writing? What kinds of questions are you trying to answer with your work? What do you even think the current questions are?
I don’t think I’m trying to find answers in my poems, it’s more that I’m trying to work through certain feelings or processes, for example, grief. Nearly all of my poems are based on my own personal experiences. I am very opinionated but I don’t have to write poems that are centred on these opinions. I think you can ruin a poem if you come to it with a carefully plotted agenda, it can take all the humanness out of it.

I think that when you write a poem, your beliefs and values creep into them naturally. For example, I don’t set out to write feminist poems, but because I am a feminist, feminist values are going to be present in my work, even if it’s in a subtle way. You don’t have to hit people over their head with your politics, and just because you come from a minority group, it doesn’t mean that all your poems should be about one particular aspect of your identity. It’s very reductionist, and a bit offensive when people suggest that. The person you are will come through in your work, even if you are writing a poem about a flower!

7 – What do you see the current role of the writer being in larger culture? Does s/he even have one? What do you think the role of the writer should be?
I think the writer’s job is to write honestly about life, even if you are writing fantasy, you can still bring real emotion or atmosphere to it. Writers should expose the parts of themselves that are often kept hidden, because if a poet is dishonest and submits to the status quo, what hope do we have? Of course not everybody is going to like your work, and of course you will upset people, but that’s all part of being a writer, you have to be rebellious.

8 - Do you find the process of working with an outside editor difficult or essential (or both)?
I’m really interested in receiving constructive feedback. I have an on-going poetry exchange with another poet, and her feedback has improved my work considerably. I don’t think an outside editor is essential, but it is advisable.

9 - What is the best piece of advice you've heard (not necessarily given to you directly)?
There is no writer’s lifestyle. Don’t wait to be told what to do, just write!

10 - How easy has it been for you to move between genres (poetry on the page to poetry films)? What do you see as the appeal?
The challenge of finding visuals for my poems is so exciting! Making poetry films and working as a director has been quite an experience, although it’s not always easy. Once I’m set on an idea, I know exactly what I want, and am very focused on bringing it to fruition, however films don’t ever turn out entirely how you expect them to, but in my experience, this hasn’t ever been a bad thing. I am interested in literature, visual art and film, so it made sense to combine these interests.

11 - What kind of writing routine do you tend to keep, or do you even have one? How does a typical day (for you) begin?
As with most writers, there is no such thing as a typical day. I squeeze in as much writing as I can whenever I have a spare few hours. I have commitments outside of writing because I have to pay rent! But writing will always remain my priority, even if it means sacrificing a comfortable life.

12 - When your writing gets stalled, where do you turn or return for (for lack of a better word) inspiration?
I am lucky because I haven’t ever experienced writer’s block. I seem to have the opposite problem. I have hundreds of ideas at any one time, and take on multiple projects. I am getting way better at saying “no” though.

13 - What fragrance reminds you of home?
There are multiple places that I consider to be home, so this is an impossible question to answer, I’m afraid!

14 - David W. McFadden once said that books come from books, but are there any other forms that influence your work, whether nature, music, science or visual art?
All of the above. My poems come from everything that surrounds me. A lot of my poems are closely connected to nature. I have a whole section of water poems in my debut collection You found a beating heart.

15 - What other writers or writings are important for your work, or simply your life outside of your work?
I read quite diversely, and listen to book podcasts and youtube reviews regularly. I like to expose myself to lots of different types of writing, because I think it’s important to know what else is out there. I think the poet that has had the most impact on my work is Thom Gunn. I wrote my MA thesis on his work.

16 - What would you like to do that you haven't yet done?
I would like to complete my novel. I’m taking a break at the moment to concentrate on other projects.

17 - If you could pick any other occupation to attempt, what would it be? Or, alternately, what do you think you would have ended up doing had you not been a writer?
Definitely something related to the arts, perhaps a painter.

18 - What made you write, as opposed to doing something else?
It’s something I have to do, it’s a coping mechanism for me, and it’s the only activity I can fully lose myself in. It wasn’t really a choice.

19 - What was the last great book you read? What was the last great film?
I am enjoying reading Dream Story by Arthur Schnitzler at the moment – this was the book Kubrick’s film Eyes Wide Shut was based on. I would choose Perdues dans NewYork for the last film I really enjoyed. It’s a strange, poetic film, which is quite similar to a lot of my work thematically.

20 - What are you currently working on?
I want to return to academia soon to do a PhD related to poetry and film, so I am just considering my options at the moment. I am also really excited about finishing my novel.

12or 20 (second series) questions;
Posted by rob mclennan at 8:31 AM
Labels: 12 or 20 questions, Mud Press, Nisha Bhakoo, The Emma Press, The Onslaught Press