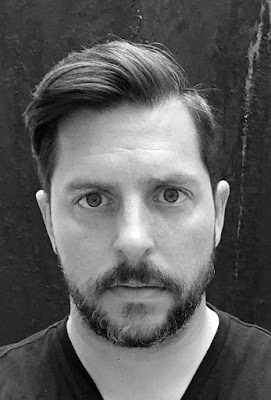 James Meetze [Metz] is the author of three books of poetry, including Phantom Hour and Dayglo, which was selected by Terrance Hayes as winner of the 2010 Sawtooth Poetry Prize, both published by Ahsahta Press. He is also the editor, with Simon Pettet, of Other Flowers: Uncollected Poems by James Schuyler (FSG, 2010). He lives in San Diego, where he teaches creative writing and film studies at Ashford University and, with Ken White, writes for film and television.

1 - How did your first book or chapbook change your life? How does your most recent work compare to your previous? How does it feel different?
My first chapbook, Serenades, was published by Dana Ward’s Cy Press in 2003. It was, for me, the first poetry object that gave me permission to participate in what I perceived as “professional poetry culture” as a poet separate from being a publisher (I ran Tougher Disguises Press from 2002-2006, when I ran out of money). Like much of my recent work, Serenades is a serial poem. I’ve always been interested in the serial and long poem, in the stamina that such a poem requires, and find myself most drawn to writing in this mode. I think the major difference between my recent and current work and my earlier work is its scope and vision. Strangely, and I’m blinded by my own bias, of course, I don’t think my voice hasn’t changed all that much; what it needs to say, however, continues to expand and open.

2 - How did you come to poetry first, as opposed to, say, fiction or non-fiction?
I’ve been a reader as far back as I can remember. In my freshman or sophomore year of high school, my literature teacher, Gerry Schimke, gave me Ginsberg’s Howl. It was the first thing that made sense to me on a cellular level. I felt poetry in my body. I’d never thought about being a writer, even though, at the time, I was writing, printing, and distributing an underground one-sheet paper at school that featured all sorts of naïve “cultural” commentary. I’m certain this is what led my teacher to think that Ginsberg would resonate with me. And Ginsberg is such a great touchstone, because he names his influences and his peers liberally, which provides the sort of reading list necessary for a young poet. Poetry has been it ever since.

3 - How long does it take to start any particular writing project? Does your writing initially come quickly, or is it a slow process? Do first drafts appear looking close to their final shape, or does your work come out of copious notes?
Writing projects generally develop out of my reading or out of concerns over which I obsess. For instance, my new book, Phantom Hour, was born out of a meeting with a psychic, research on the historical figure of Merlin, and my father’s struggle with dementia. I’ve written about it here: https://ahsahtapress.org/product/phantom-hour/. I began making notes from conversations about my father’s life and conversations with other family members about our family history. Then I dove into full-on genealogical research to trace a history. Once I begin writing, however, the drafts do appear quite close to their final shape despite my rigorous editing process.

4 - Where does a poem usually begin for you? Are you an author of short pieces that end up combining into a larger project, or are you working on a "book" from the very beginning?
While I do write quite a few discrete poems, they’re most often always composed within the context of a larger book-length project. I’m always working on a “book” as a book. Though, the work I’m currently writing is likely to span numerous books.

5 - Are public readings part of or counter to your creative process? Are you the sort of writer who enjoys doing readings?
I do very much enjoy giving readings. My work is always tied to song, and so it should be sung (read). Public readings, too, are integral to my editing process. In the vibration of the audience I feel the frequency of the poem and know whether it needs to be tuned differently. I’ll read for anyone, anywhere, anywhen. I guess I’ve got a bit of the troubadour spirit in me.

6 - Do you have any theoretical concerns behind your writing? What kinds of questions are you trying to answer with your work? What do you even think the current questions are?
Always. Yes. And, in a certain sense, the concerns are always of the same thrust despite the trajectory of the poem: what is the reach of language as it relates to consciousness and whose language enters and lives in my body. It isn’t all my own. What is the transcendent or magical power of language? I think a great deal about “the practice of outside,” as Blaser puts it, and the potential for rhizomatic thinking—and making—in which linearity as such is not necessary to an operating principle. Theoretically, I’m informed by Deleuze and Guattari, by Kristeva, by Ricoeur, very much by Jung, too, despite what people think. But much of what I’m doing is working through is working toward a better understanding of the mythic resonance of the polyphonic voice in the contemporary world.

7 – What do you see the current role of the writer being in larger culture? Does s/he even have one? What do you think the role of the writer should be?
I think poets are generally shitty pitch people for their own work/service outside the microcosm of the so-called “poetry world,” so the role of the poet in larger culture is much smaller than it could/should/absolutely needs to be. I dislike the impetus behind the phrase, “now, more than ever,” because temporality isn’t ever a precise point on a line; now stretches into the small human conception of ever. Poetry is as important as it ever was or ever will be, and poetry is thriving in so many ways, but our current culture, despite our obvious need for language and empathy and shared humanity, needs poetry in a dire way. It’s the direct route to the soul, and that’s a place we need to explore and nourish. We’re too blinded by obsessive voyeurism (reality TV and gossip culture) to think about how language develops in parallel to the psyche and, thus, we see how a barely articulate huckster coerced millions of people into voting against their best interests. Look at the way this mountebank used, and continues to use, asyntactic, repetitive fragments to cajole a significant portion of the electorate. Isn’t that the place of poetry as an unacknowledged legislating force? I think the role of the poet could be to engender inclusivity instead of exclusivity. The role of the poet could be to hold up a mirror to the masses. The role of the poet could be to touch the part of our souls that reminds us what soul is and where to find it in ourselves and in others.

8 - Do you find the process of working with an outside editor difficult or essential (or both)?
I find outside editors essential—though it’s not always an editor as an editor per se; often, I have a very close cadre of friends to whom I trust the work for editorial suggestions.

9 - What is the best piece of advice you've heard (not necessarily given to you directly)?
Shift the narrative. Shift the perspective toward the narrative.

10 - What kind of writing routine do you tend to keep, or do you even have one? How does a typical day (for you) begin?
My typical day begins with reading as soon as I wake, then I surf with my son, Brighton, if there are waves or I do yoga if there aren’t. I like to begin every day connecting to language, to nature, and to the body. For the past two years, I’ve been writing screenplays with Ken White. We work together about two or three hours almost every weekday afternoon, after we teach. So, while I’ve also been writing poems, those have taken a back seat, become more sporadic, but I do sit with the current poem, for at least some time, daily. I find that writing an ongoing serial poem—a “world poem,” I guess I could call it—called “The Long Now” enables me to drop in and fiddle around, make a line or two, without having to adhere to a strict routine. This hasn’t always been my practice, however. In the past two years, I’ve written a collection of poems, three feature-length scripts, a dissertation, and a creative writing textbook. I must have some kind of routine. Usually, it’s just getting the work done when I’m able.

11 - When your writing gets stalled, where do you turn or return for (for lack of a better word) inspiration?
The natural world. Robin Blaser and Lisa Robertson. Nathaniel Mackey, who was my teacher at Santa Cruz. Dante. Homer. Whatever books of philosophy I’m dallying in.

12 - What fragrance reminds you of home?
I spent much of my childhood with chronic sinus issues, so scent is powerful for me. I think it’s why I’m so obsessed with wine; it’s an aid to memory. I’m reminded by the Pacific Ocean. Rosemary. Orange blossoms. Honeysuckle. The smell of fog on a cold fall morning. Chlorine.

13 - David W. McFadden once said that books come from books, but are there any other forms that influence your work, whether nature, music, science or visual art?
I think David W. McFadden is right. Much of my juvenilia was ekphrastic: inspired by music and painting. Now, it’s books and thought and soundbites and stories that have endured throughout human history.

14 - What other writers or writings are important for your work, or simply your life outside of your work?
I think my response to #11 covers this to a certain extent, but I’m always reading new writers and new books, too. Forthcoming books by Kelli Anne Noftle, Ken White, Sueyeun Juliette Lee, Jasmine Dreame Wagner, and Andrew Wessels. New books by Douglas Kearney, Peter Gizzi, Ryan Murphy, Robert Seydel, Adrienne Rich, and Elena Karina Byrne are all on my nightstand.

15 - What would you like to do that you haven't yet done?
Kill a man. Wait. I probably shouldn’t say that. I’d love to see the whole world. I’d love to learn that alternate universes do exist. I’m planning to make a feature film. I’d love to help humans be better to other humans and to themselves.

16 - If you could pick any other occupation to attempt, what would it be? Or, alternately, what do you think you would have ended up doing had you not been a writer?
I was always going to be a writer and professor of writing. If I were to do anything else, I’d be a winemaker.

17 - What made you write, as opposed to doing something else?
Writing, poetry, was the one way of knowing that was most accessible to me and for which there was a long tradition. It was, and it remains, the one profession and praxis in which the doing (making) is also a way of knowing.

I read a lot books that I think are great, but recently—and I wrote a blurb for it—I’d have to say Kelli Anne Noftle’s Adam Cannot Be Adam (Omnidawn, 2017) is pretty fucking great.

19 - What are you currently working on?
I’m hustling to support my new book Phantom Hour, and giving as many readings as I’m able. I’ve just finished writing a feature film script with Ken White, called The Conservationist. There’s always another script in the hopper, too. I recently completed a poetry manuscript, called Cosmographeme, which includes the first eighteen sections of “The Long Now.” The nineteenth section is now finished, too, and the twentieth is underway.

James Meetze, you are always welcome to come to SF and read at Alley Cat Books! The only question is, how to get you here. We need to hear The Phantom Hour. Andrew Wessels is coming! Hitch a ride with him.