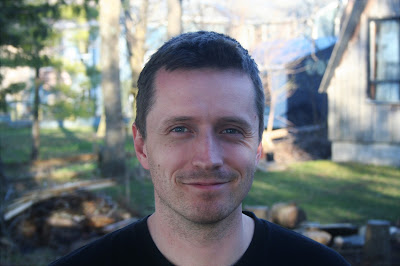 Rob Taylor is the author of the poetry collections The News (Gaspereau Press, 2016) and The Other Side of Ourselves (Cormorant Books, 2011), along with four chapbooks. His poems, short stories and essays have appeared in more than fifty journals and anthologies, including The Fiddlehead, The New Quarterly, Event and Geist. In 2015 he received the City of Vancouver's Mayor's Arts Award for the Literary Arts, as an emerging artist. He lives in Vancouver with his wife and son, where he coordinates the Dead Poets Reading Series and teaches creative writing at the University of the Fraser Valley. Since 2006 Rob has run the Roll of Nickels blog, which he believes is the second oldest Canadian poetry blog left standing (or at least the second oldest run by a guy named rob).

1 - How did your first book or chapbook change your life? How does your most recent work compare to your previous? How does it feel different?
My first book changed my life. I don’t understand people who say that their first book didn’t change theirs. What were they expecting? Riches? Hordes of readers? Balloons?

I was a kid who hunkered down in his parents’ basement and wrote hundreds of terrible poems, thinking he was creating great art when really he was just making (and saving) his life. But eventually somehow from that came a manuscript! And a publisher accepted it! And it went out into the world! And some kind and smart people read it and didn’t hate it!

I mean yes, of course, nothing changed. Nothing got any better. My life was still hopeless. But everything was different, better and hopeful, you know?

My recent work feels, well, I’d like to say more desperate – scrawled on scraps of paper in my five free minutes. But thinking back it was pretty desperate, then, too, trying to figure out how to be human and happy. I guess, perhaps, that my life feels more consequential now, and my poems feel less so.

2 - How did you come to poetry first, as opposed to, say, fiction or non-fiction?
Oh, I have no idea. It was the right mold for everything I was pouring out of myself at the time. And it still is.

3 - How long does it take to start any particular writing project? Does your writing initially come quickly, or is it a slow process? Do first drafts appear looking close to their final shape, or does your work come out of copious notes?
I don’t have a plan. I just start things and occasionally they turn into projects. For my new book – The News, a poem a week during my wife’s pregnancy with our son – I wrote the first few poems without any plan in mind, and only after I noticed a trend developing (a new poem arriving about every seven days) did I try to shape it as a “project.”

Generally speaking, I’m opposed to pre-planning the poems I write – not knowing where I’m going is what makes the poems possible. Fiction and non-fiction are different – I lay out the ground work a bit – but I try not to lock in the destination too firmly.

These days, writing is a slow process in that I produce very little work (new baby + new book + new job = new desiccated husk in shape of former poet), but when the poems do come they’ve usually been bouncing around in my head for quite some time and I’m three or four drafts in before I write anything down. So, fast and close to their final shape?

4 - Where does a poem or work of prose usually begin for you? Are you an author of short pieces that end up combining into a larger project, or are you working on a "book" from the very beginning?
Short pieces! Books are terrifying, but manageable if I only bumble my way towards them. Anything I write, be it poetry or prose, begins in what I call a “lyric moment” (an image, a line, an idea, a feeling) – that spark which agitates the poem into being, like a grain of sand swept into an oyster.

5 - Are public readings part of or counter to your creative process? Are you the sort of writer who enjoys doing readings?
Yes, I enjoy them. They put a certain type of pressure on the words that I can’t manufacture at my desk. I can’t hide behind the en vogue magical thinking that I write poems only for myself. My audience is right there and I have to ask myself: am I wasting these poor people’s time?

At this point, having given many readings, at the end of them I usually have a feeling of either having “held” or “lost” the room. And when I’m really in the moment, I can feel that rise and fall in real time, from poem to poem, or line to line during a poem. It’s a bit like surfing or riding a horse: the harnessing of a greater power which is only fleetingly under your control. I don’t get out much these days, so it’s the best adrenaline rush I’ve got going. And it helps improve the poems, to boot.

6 - Do you have any theoretical concerns behind your writing? What kinds of questions are you trying to answer with your work? What do you even think the current questions are?
I have new questions with each poem. Otherwise, why write the poems?

My current questions are more often than not around ideas of family: What is it? How is it made? How wide can we stretch its boundaries before it falls apart around us? Or does it strengthen from the stretching?

7 – What do you see the current role of the writer being in larger culture? Does s/he even have one? What do you think the role of the writer should be?
Oh, do your damn thing. Find your reader. Whether your work is capital “P” Political or not, if you bring a reader back into a deeper attention to language, and to the self-reflection invariably squirreled away inside that action, then you’ve done your little part in bending the long arc or the moral universe towards justice.

But then, dear god, look at the world right now. Down south, and in Europe, and up here too, with our pathetic alt-right copycats and a mainstream that has to do less and less to impress by comparison. We have to do everything – vote, protest, organize, resist. But not because we are writers. Our role as writers is but a small part of our duties as vigilant, compassionate human beings.

8 - Do you find the process of working with an outside editor difficult or essential (or both)?
Essential. Sometimes both. A lot of people are smarter than me, more talented, etc. And even if somehow you are the smartest, most talented person on earth, when you look at a chair you’re only ever looking at one angle of the chair, you know? Especially if you’re sitting in it.

9 - What is the best piece of advice you've heard (not necessarily given to you directly)?
“No semicolons. Semicolons indicate relationships that only idiots need defined by punctuation. Besides, they are ugly.”—Richard Hugo

10 - How easy has it been for you to move between genres (poetry to fiction to critical prose)? What do you see as the appeal?
Moving between them isn’t that hard once I have something going. Starting anything but poetry is difficult for me. I think through my life in poetry – I turn to it to record, and make sense of, my days. Fiction and non-fiction are work – joyful work, most often, but still work I have to circle around and settle into. With poems, I’ll suddenly realise my mind’s wandered and I’ve dreamed up a first draft, and then I’ll have to run off to write it down.

Mary Oliver, in an otherwise rather silly essay in her new book Upstream, talks about the “attentive, social” mind and the mind which “has a hunger for eternity” – I think of these as my “prose” and “poetry” minds. Fiction has blueprints and scaffolding and little workers running up and down the beams. It taps those parts of my brain that like structure and are tired of my poetry mind wandering the garden singing aimlessly to the birds and flowers.

11 - What kind of writing routine do you tend to keep, or do you even have one? How does a typical day (for you) begin?
Every day begins with a baby squalling, then desperate, drowsy negotiations with my wife over who gets the extra five minutes of sleep (she usually lets me win), then general madness until we put him down to sleep at night. I can’t say I’ve written all that much lately.

12 - When your writing gets stalled, where do you turn or return for (for lack of a better word) inspiration?
I go on living my life. I don’t have time to worry much about it.

I have resistance to the idea of Writer’s Block. Doesn’t that just mean “living life like a normal person”? That doesn’t seem like agony to me. I wrote almost nothing for two years after my first book came out, and that meant I got to read more, see my friends, live overseas, play sports, and accumulate inside me the good, vital, pulsing stuff I later drew on in my writing.

Similarly, I’m not a fan of writing prompts. I mean, Jesus, can’t you just go do the dishes or get groceries or something? Do you need to write a poem from the perspective of a pomegranate, just to say you wrote today? There’s more than enough bloodless poetry out there as it is.

13 - What fragrance reminds you of home?
Fabric softener sheets. Deli ham. My wife’s moisturizer. Rain on cement. Rain on soil.

14 - David W. McFadden once said that books come from books, but are there any other forms that influence your work, whether nature, music, science or visual art?
Yes, all of them, of course! The universe!

I am forgetting many, but I need to stop doing this now.

16 - What would you like to do that you haven't yet done?
Travel in South America. Teach my son to throw a Frisbee and shoot a basketball. Edit an anthology of some sort. Go to the book launch for a former student’s first book. Own a poetry-themed coffee shop and run it into financial ruin with earnest, whole-hearted enthusiasm.

17 - If you could pick any other occupation to attempt, what would it be? Or, alternately, what do you think you would have ended up doing had you not been a writer?
A minister in a church from the near future where it’s ok if you’re agnostic. Or an elementary school teacher.

19 - What was the last great book you read? What was the last great film?
Book: The most recent collections by Suzanne Buffam, Don Coles, Nora Gould, Alexandra Oliver, Brenda Shaughnessy, and Sue Sinclair all had poems which knocked me sideways in one way or another. Also, while visiting the Temple of Olympian Zeus my wife and I read “Ithaca” by CP Cavafy aloud and wept while our son looked up at us as if we’d lost our minds. Does that count?

20 - What are you currently working on?
Final, final, final edits to a short fiction manuscript, based on my time spent living and traveling in Africa. Early, early, early edits on a third poetry manuscript. Mostly, though, trying to keep my son from breaking things, esp. himself.