The sun buries itself

The sun buries itself
Over Staten fucking Island.

The sun a bale of copper.
The sun a Pontiac Fiero.

I don’t want to—
Or several—
Or ever—

I can’t see you
Through

Your sun veil.
Absent the everyday.

I’ve been enjoying the clipped lyrics of American poet Ryan Murphy’s third poetry collection, Millbrook (Black Dress Press, 2017). The author of Down with the Ship (Otis Books | Seismicity Editions, 2006) and The Redcoats (Krupskaya, 2010) [see my review of such here], Murphy’s latest title is powerful and subtle, and continues his exploration of extended thoughts through short, almost staggered, lines. Named for the New York State town in which he lives, Millbrook writes less on a geography than around or even through that same geography. The poems are very much of and from the town of Millbrook, writing less a descriptive lyric than a metaphysical one, as he writes as part of the title poem:

We live no longer
In a tense.

The grass grows
A branch breaks

And the you and I
A bough.

This is not a feature film. 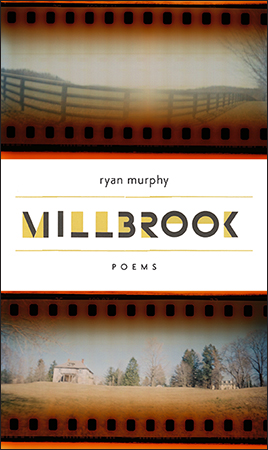 Over at Touch the Donkey, he spoke of the sequence that end the collection, nine numbered poems each titled “Untitled,” saying that “that they are part of a longer sequence that centers around my return to my home town in New York’s Hudson Valley after living elsewhere for the past 18 years—so in part I think they are about a kind of dislocation with a familiar landscape, and allowing those images to re-introduce themselves in to my vocabulary.” The interview continues:

A: Well, the landscape has changed, which certainly changes the language. And I think that these poems are a bit more stripped down than work I have done in the past.

Q: Is being influenced by your surroundings an element of your writing, or only one specific to this current sequence?

A: It has always had a lot of influence on my writing. My poems are almost always written about the dailiness of wherever I find myself.