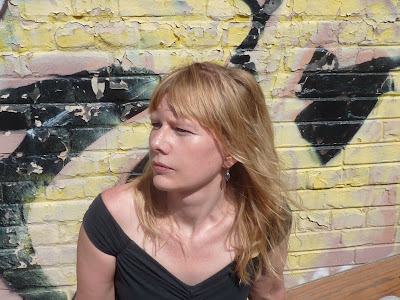 Karen Solie’s most recent collection of poems, The Road In Is Not the Same Road Out, was published last year by House of Anansi in Canada, and in the U.S. by Farrar, Straus & Giroux. A volume of selected and new poems, The Living Option, was published in the U.K. in 2013.

She was writer-in-residence at the University of Alberta during the 2004-5 academic year.

A: Because the publication of my first book came as a surprise, the experience of the second was different. I imagine it is for most writers. Modern and Normal was written with an element of nervousness – hope/doubt/curiosity/determination/fear – over whether I could write not just something else, but something better. Though I’m working on my 5th manuscript now, and the experience is the same. In terms of how it feels, where I am in my writing now is more or less where I was then. In some ways I’m more sure of myself; in others, less.

U of A gave me my first writer-in-residence job, in fact my first job as a writer, and I was in equal parts grateful, exhilarated, and intimidated. I learned a great deal about mentoring at a very important time to learn it, and a number of fascinating people came through my office. I know I learned more from the job, from the writers I worked with, than they did from me. It was a weird time, too. I lived in an apartment hotel on the edge of downtown that was its own strange planet. Modern and Normal was edited there, and I also drafted work that ended up in Pigeon.

A: I haven’t until my current manuscript-in-progress embarked on the writing of a book or series of poems guided by a particular theme or subject. The handful of found poems in Modern and Normal came about not from a desire to write a series of found poems, but from a realization at some point that I’d accumulated a fair number of them. The task then was to reduce that number by half – two-thirds, probably – which was part of the editing I undertook in Edmonton. I was interested while working on that book to think through scenarios, references, details not as derived from personal anecdote. To supplement my store of figurative language, but also to refine, complicate, and vary how metaphor might operate. This risk in these statements is always that people will read the work with them in mind and think, “hmm, really”? Anyway, I read more and researched more. Tonal and rhetorical registers became a concern – their use and overuse. But all this developed pretty naturally. None of it was outlined as a plan to pursue.

The U of A position was a new experience, and as such made its way into what I was writing the way any new experience does. But it also afforded reading time, note-taking and thinking time, which is invaluable in its generally rarity. As mentioned, I did some new writing toward Pigeon while in Edmonton. The long(ish) prose piece “Archive” was drafted there, for one, inspired by my terror at walking across the High Level Bridge. I drafted many other poems that went nowhere, too. Got a few of those out of the way, which is part of it.

A: Though not from Alberta, I am from southwest Saskatchewan, so know the prairies. I very much liked that I could drive home to the farm every other week or so throughout my tenure. It’s a six-hour drive, depending on weather, so in Canadian terms not bad. I appreciated being in the north-central part of the province for its differences in climate, wildlife, landscape, and for the proximity to the North Saskatchewan River. I love rivers, their disparate characters, and spent a lot of time in the river valley. I also visited Elk Island Park and was intimidated by some bison. The High Level Bridge ended up influencing me a great deal, if being influenced can mean being terrified by. I lived on the downtown side of the river and walked the bridge a few times a week to get to the university, sometimes in pretty bad weather. My parents’ ‘92 Crown Victoria would be frozen solid in my apartment building’s parking lot, and by the time I’d stepped out onto the trestle I’d gone too far to hike back downtown to the subway. It would have seemed – not like defeat, I’m okay with defeat – kind of crazy. The bridge became a sort of icon for me during my time there.

I met wonderful writers, participated in and attended some great events, but don’t think I can really characterize the literary community then. Eight months isn’t enough time to get a good handle on anything. And it was 12 years ago. One thing I remember very clearly is reading C.D. Wright for the first time in Audrey’s Books on Jasper Avenue. You never know when or where you’ll encounter the work that will change you.

A: I remember I was chuffed to have an office with my name on the door, where people could come to see me. I probably met with more writers from the larger community than I did with students. A guy called from jail to talk about his poetry. And there was an older fellow, around 80, who wanted to write stories about his life to give to his children and grandchildren. Okay, I thought. But then his stories were fantastic, a blend of fact and fiction. He wrote about owning a racehorse, about learning to hunt. They were vivid and funny and frank, literary in the best way. I encouraged him to try publishing them, but I don’t think he was really interested in that. He was fun to talk to, too. It was a great lesson toward going into relationships with writers and their work with an open mind, and to respect what they want from the encounter. Which in no way means just patting them on the back. It was -- and still is; the lesson is ongoing -- about seeing beyond my own inclinations.

A: My work, as I think of it, is teaching, mentoring, and editing as well as writing, and I learned a great deal about all of it during my tenure. I made mistakes in my interactions with writers then, and regret that they had to suffer my inexperience. Not that I don’t make mistakes still, I do all the time. But my first writer-in-residence position afforded me a practical knowledge of ways I needed to, and need to, improve. The job came at a crucial time financially, put the money panic on the back burner so I could attend to the writing panic of finishing edits on the second book, and it also afforded the luxury to start on the third. In that luxury, I felt a little more free to experiment, to take time to read. The curiosities I developed then persist to this day.