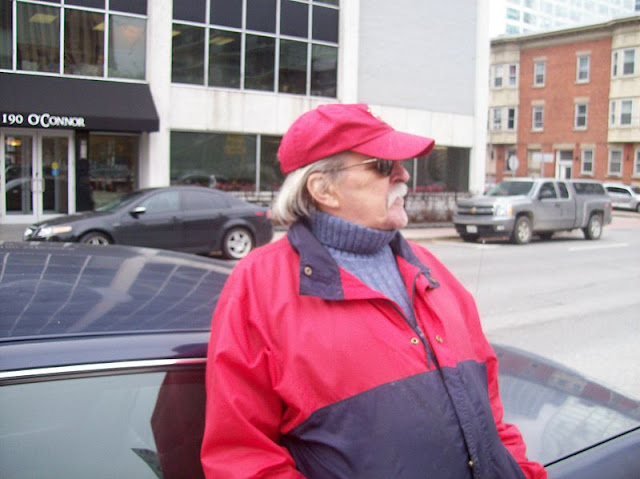 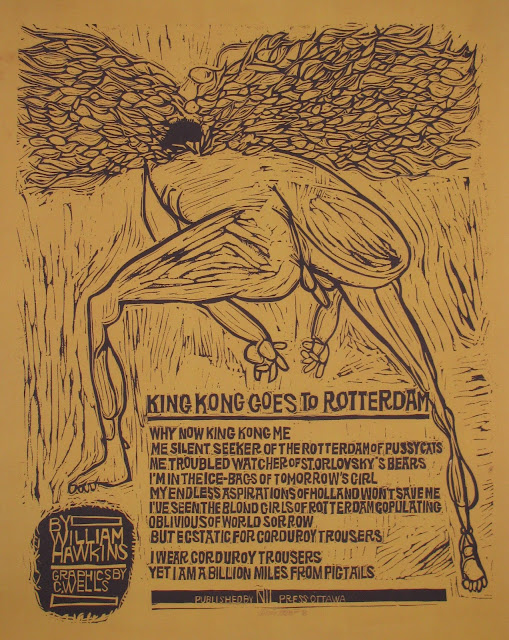 As I announced a few days ago on the Chaudiere Books blog, legendary and much beloved Ottawa poet and musician William Alfred Hawkins died at the Queensway-Carleton hospital on Monday afternoon. As Joanne Wiffen wrote in an email: “Bill passed away peacefully this afternoon. He was not in pain.” [See the CBC article here, with an earlier CBC audio interview with him here; the Ottawa Citizen article here]

I’m still in shock. More than a few of us are. [Cameron Anstee posted this thoughtful recollection yesterday]

His health (but never his spirit) had been failing in recent years, including the introduction of oxygen tanks to assist with respiratory issues. He’s said for years that he needed new lungs. But with two different ambulance visits to the hospital over the past couple of weeks, what had been theorized as pneumonia ended up being an aggressive stage four colon cancer.

From 1964 to the early 1970s, William Hawkins was a considerable presence in Ottawa, from publishing poetry, composing songs for the band The Children (which included a young Bruce Cockburn) [and only released their first album a couple of years back], and organizing events at the infamous coffeehouse, Le Hibou, hosting poets, musicians and writers alike, including Leonard Cohen, Gordon Lightfoot, John Robert Columbo and Michael Ondaatje. He won an award from the Mayor, and pissed off as many people as he encouraged and influenced. As he explained in a 2008 interview: “I just dropped out sometime in 1971, when I woke up in the Donwood Clinic, a rehab centre in Toronto, with no idea how I got there, weighing 128 lbs and looking like a ghost in my six-foot frame.” His last book for quite some time, The Madman’s War, appeared in 1974, but for the most part, he quietly retreated from public life to drive a cab for Blue Line, where stories of seeing Bill became as rich and plentiful as tales of the Loch Ness Monster [Read an interview from around that time with Hawkins, here]. 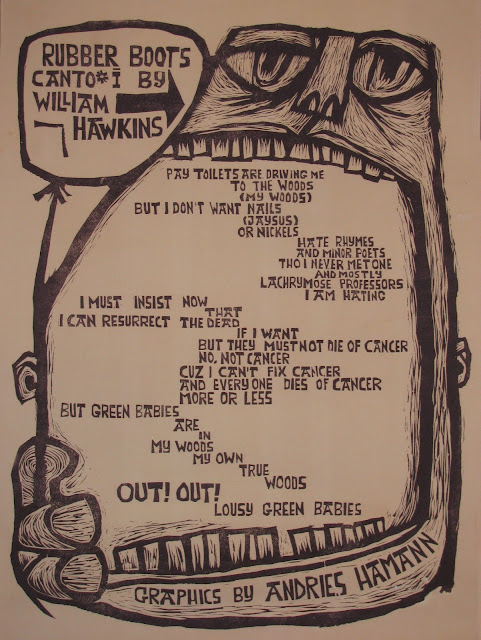 Hawkins’ exploits are as legendary as they are apocryphal, including tales of facilitating Jimi Hendrix’ recording of a Joni Mitchell performance at Le Hibou on his reel-to-reel (later recording Hawkins performing a new song on guitar at the after-party), a run-in with Mexican police at the Mexican-American border involving a pick-up truck of weed (and Trudeau’s subsequent interventions on their behalf), and a day-long reading at the site of a former hotel in Ottawa’s Lowertown [See my recent interview with Neil Flowers on the Northern Comfort anthology, an edited transcript of that reading, here]. Another story has Hawkins sitting on stage reading quietly to himself in a rocking chair during a performance of The Children at Maple Leaf Gardens, as they opened for The Lovin’ Spoonful. He hinted at a hardscrabble upbringing, including a stretch in a jouveile detention centre, for which he earned a small tattoo on his hand.

Barely into their twenties, Hawkins and Roy MacSkimming raised funds to get themselves out to Vancouver for the sake of the infamous Vancouver Poetry Conference of 1963, asking friends and enemies alike for money to help him leave town. Once there, he was able to study with and engage with Allen Ginsberg, Robert Creeley, Charles Olson and Robert Duncan, returning home with an Olson edge and incredible energy, producing, reading and publishing, it seemed, non-stop for more than a decade. During that period, his poetry appeared on a series of poetry posters around town, in Raymond Souster’s seminal anthology New Wave Canada: The New Explosion in Canadian Poetry (Toronto ON: Contact Press, 1966) and A.J. M. Smith’s Modern Canadian Verse (Toronto ON: Oxford, 1967). His books include Shoot Low Sheriff, They’re Riding Shetland Ponies! (with Roy MacSkimming; 1964) [a book famously mentioned by Frank Zappa in an interview with Rolling Stone; Joni Mitchell had picked up a copy while in Ottawa, and she was apparently living with Steven Stills at Zappa's compound], Two Longer Poems (with Harry Howith; Toronto ON: Patrician Press, 1965), Hawkins: Poems 1963-1965 (Ottawa ON: Nil Press, 1966), Ottawa Poems (Kitchener ON: Weed/Flower Press, 1966), The Gift of Space: Selected Poems 1960-1970 (Toronto ON: The New Press, 1971) and The Madman’s War (Ottawa ON: S.A.W. Publications, 1974). His poems in New Wave Canada sat alongside the work of Daphne Buckle (later Marlatt), Robert Hogg, bpNichol and Michael Ondaatje, who later included his own “King Kong meets Wallace Stevens” poem in Rat Jelly (1973), influenced, perhaps, by Hawkins’ “King Kong Goes to Rotterdam.” [Seeother tribute poems, including one by Nelson Ball here, and one by myself; another tribute poem for William Hawkins, by Neil Flowers, recently appeared through above/ground press]

Why now King Kong me
Me silent seeker of the Rotterdam of pussycats
Me troubled watcher of St. Orlovsky’s bear
I’m in the ice-bags of tomorrow’s girl
My endless aspirations of Holland won’t save me
I’ve seen the blond girls of Rotterdam copulating
Oblivious of world sorrow
But ecstatic for corduroy trousers

Since then, there’d been a small resurgence of interest in Hawkins’ work, with the publication of a chapbook of recent poems, the black prince of bank street (above/ground press, 2007), as well as the release of Wm Hawkins: A Descriptive Bibliography (Ottawa ON: Apt. 9 Press, 2010) by Cameron Anstee, who also produced the chapbook Sweet & Sour Nothings (Apt. 9 Press, 2010), a “lost” poem from the 1970s, reissued for the sake of Hawkins’ appearance at Ottawa’s VERSeFest. Held together as a folio, Wm Hawkins: A Descriptive Bibliography lists Hawkins’ work over the years in trade, chapbook and broadside form, as well as a list of anthology publications. The small folio also included reissues of the infamous poetry posters of the 1960s. As Anstee wrote in the introduction:

The writing, of course, stands up today. His poetic accomplishments were consolidated in the 2005 selected poems, Dancing Alone. However, the details of his publishing intersect with a broad cross section of people and events that made invaluable contributions to the development of Canadian Literature. Shoot Low Sheriff was published in the wake of the famous 1963 UBC conference where Allen Ginsberg, Robert Creeley, Charles Olson and others influenced the next generation of Canadian poets. Ottawa Poems was published by Nelson Ball’s now legendary Weed/Flower press. Hawkins’ inclusion in the Raymond Souster edited New Wave Canada not only saw him published by Contact Press, but also published alongside early work by Michael Ondaatje, bpNichol, Victor Coleman and Daphne Marlatt (then Daphne Buckle) among a long list of others. See Roy MacSkimming’s excellent introduction to Dancing Alone for further description, but these details of Hawkins’ publishing life are important. They place him in significant currents and developments in Canadian poetry. Yet, the specific details of this publishing activity have remained scattered.

In 2015, editor Anstee saw the release of the thoroughly-researched The Collected Poems of William Hawkins (Chaudiere Books, 2015), a book that even included poems Bill had long forgotten. [You can read Anstee’s introduction in issue #11 of seventeen seconds, here; an interview with Anstee on the project here; see a video of Hawkins reading from the collection at the launch here; and copies of the book are available here]

William Hawkins was not only from Ottawa, but remained in Ottawa, influencing and celebrating the City of Ottawa during a period that had very few poets known outside of the city’s borders, and remarkably few avenues for publication. Two months away from his seventy-third birthday, William Hawkins became one of the first two inductees to the VERSe Ottawa Hall of Honour [Read a brief profile/interview I did with Hawkins around that time here]. The plaque we presented to to him included lines from the fourth poem of Ottawa Poems, that read: 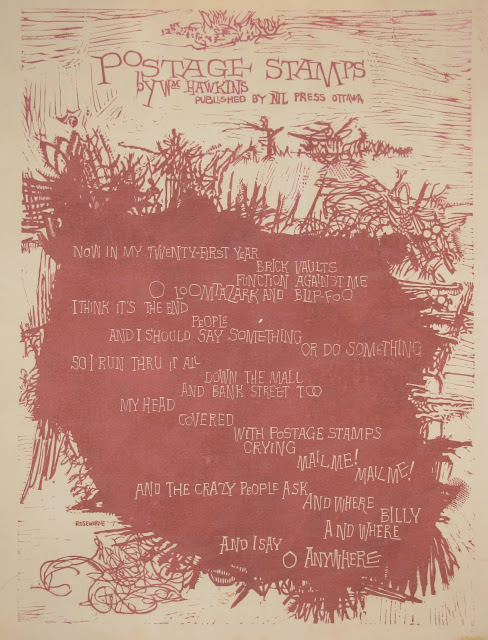 After Noel Evans put together the rough manuscript of Dancing Alone, it was I who pushed to get it into print. For years, he would show up at my doorstep (Rochester Street, Somerset Street and McLeod Streets) and call from his cellphone, requesting I come out to his car for a visit. “Hey, my boy!” was his usual greeting. I could tell immediately that the publication of The Collected Poems of William Hawkins was exciting to him because, for the first time, he actually came into the house, oxygen tank and all. Part of what he liked about the book (despite considering the whole project suspect) was that he was finally able to dedicate a book to his mother.

He once told me that our apartment building on McLeod Street housed a brothel in the 1970s. He knew the building from driving cabs, and driving the girls over. He had the wistful chuckle of someone who’d once been quite the troublemaker, enjoying the stories he knew were long behind him.

We last spoke about two weeks ago, when Bill called to purchase more copies of the selected poems, and to complain about his latest hospital stay, which included having to get new blood.

Ah, hell. Bill was a friend of mine. His energy was always positive and infectious, even if he hadn’t much. His performances were incredible, but, at least in his later years, took enough out of him that he required days to recover. When he read as part of his Hall of Honour ceremony, he held a room like I’ve rarely seen, before or since.

I’m really going to miss him.

[See also: CBC Radio's All in a Day yesterday featured Sneezy Waters and Bruce Cockburn talking about William Hawkins; CBC News talking to Sneezy Waters yesterday; and an obituary in the Ottawa Sun; and did you know CBC did a profile on Bill in 2008?]