Did you see my prior series of notes here? Or, really, my notes from the fair prior to that? I have so many notes on so many things. Should I even possibly start thinking about the dates for the fall fair? So much to do, so much to do. 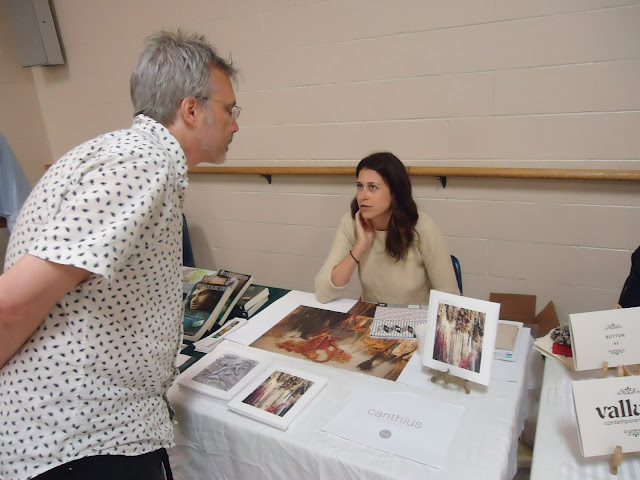 [Kyp Harness, listening intently to Claire Farley at the Canthius table] Ottawa/Toronto ON: The second issue (spring/summer 2016) of Canthius, a journal of “feminism & literary arts” [see my recent interview with co-editor Claire Farley at Queen Mob’s Teahouse], includes, at the offset, a short note from the editors:

As editors of a new literary journal, we are still negotiating how best to promote gender equity. While our association with feminism could obligate us to publish works with overtly feminist themes, we’ve opted instead to offer a diversity of women and genderqueer writers space to share experiences and perspectives, no matter what those may be.

Now that they’ve two issues of their semi-annual journal under their belt (and seeking work for a third), one can’t help but be impressed by the clarity of vision editors Cira Nickel and Claire Farley have for Canthius, a journal of poetry, fiction and visual art. This new new issue includes new writing by an impressive list of writers both new and emerging, including Catriona Wright, Jacqueline Valencia, Sandra Ridley, Chuqiao Yang, Frances Boyle and Mary Ma, as well as artwork by Mary Grisey. In a certain sense, it’s far too easy to produce a first issue: the hard part is in producing a second, and a third; this becomes even more difficult without having a clear sense of what you wish to accomplish before you even begin, and their mandate is focused, open and incredibly straightforward, even as they, as they say, still work to negotiate the ways in which they can assist in promoting writing, thinking and conversation. As they infer in their introduction, if one wishes for a proper conversation of any sort, one requires the input of more than a select few.

We fail to name this right / without the words
For lapsing / lilies / wilted / in the beginning
Wind caught nothing / but your leaf unfurled
To fall. (“Dirge,” Sandra Ridley)

Given the limitations of a semi-annual journal, they’ve also been opening up their blog for further materials, including notifications, interviews, poems and non-fiction. So far, they’ve held launches for each issue in both Ottawa and Toronto (where each of the co-editors live). It will be interesting to see just how this journal continues to grow over the next couple of years. 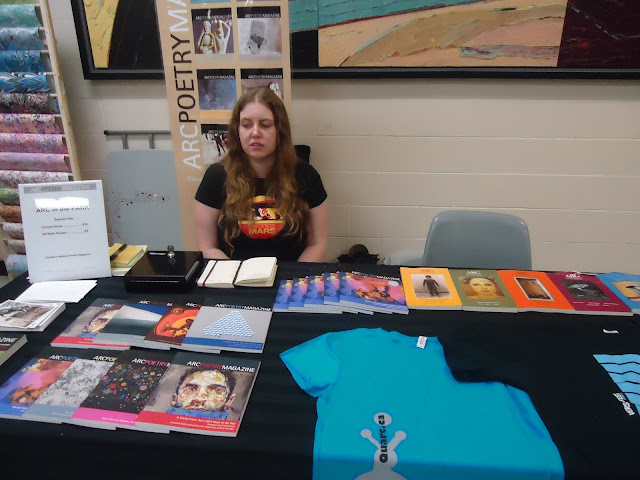 Toronto ON: From Jim Johnstone’s Anstruther Press comes Toronto poet Jessica Popeski’s Oratorio (second edition, thirty copies; just how small might the original run have been, I wonder?), the first of two chapbooks the press produced by her in 2015 (the other, which I have not seen, being The Wrong Place). According to her online bio, Popeski is a Classical Voice and Creative Writing graduate from Brandon University, and her dense and dexterous lyrics are heavy with not only a musical tone, but musical language (and even the occasional musical score). Just listen to the opening of the poem “Home Visit,” that reads: “The cat curls a lick-wet paw behind an ear, makes a straw- / skinny mew for milk. String-darned socks smoke like kippers / on the radiator, space heaters strategically sprinkled.” While certainly not pretending to be a language poet gymnast, Popeski isn’t writing a complete straight line, either, allowing her phrases and sentences the occasional pop and sing, allowing each line a bounce in its step.

Mother-in-Law’s Tongue
on the counter, reeking

belong in books, and
ruby-crowned kinglets,

over prairie suburb sprawl
will be watched on television. (“Last Child in the Woods”)

With Oratorio edited by Dionne Brand, I’m curious to know if Popeski’s second chapbook was as well; and if a debut full-length collection (whether by McClelland and Stewart, where Brand edits, or anywhere else) might be far behind.