Seattle, Washington poet Sarah Mangold’s third full-length poetry collection is Giraffes of Devotion (Tucson AZ: Kore Press, 2016), a collection described as an experiment “to present a rebelliously voiced witness and investigator into U.S. history, its families and war. Framed within the domestic sphere of military service, facts and speech are misheard, whispered, indexed and reassembled to reveal the word make spirit.” As Kore Press editor Ann Dernier writes in the press release:

In the mid-1920s, Sarah’s great grandmother Mrs. Roy Smith followed her husband Lt Commander Roy Smith with their four children to Shanghai where he was stationed with the US Navy in the years following the Boxer Rebellion. In the tradition of family stories, Giraffes of Devotion is the patient work of collage created from oral history archives and a lifetime of letters, and in that tradition, this narrative incorporates lapses of time. It sputters, pauses, rushes ahead, but all of the gaps fade with each new letter, each new poem and each plunges the wealth of memory of a lifetime of service, of military service and in service to husbands and fathers in land both occupied and occupying. 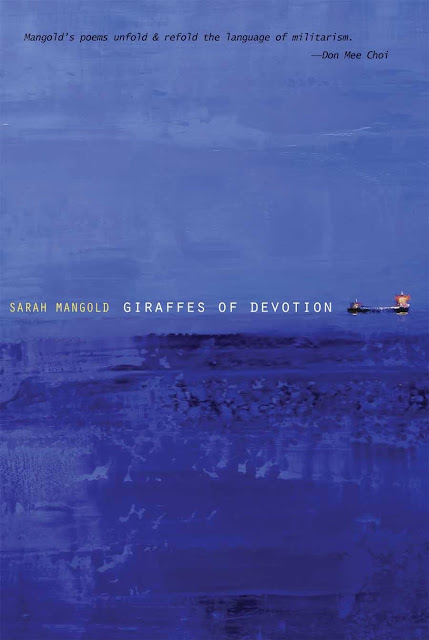 Giraffes of Devotion follows Mangold’s previous collections, Electrical Theories of Femininity (Black Radish Books, 2015) [see my review of such here] and Household Mechanics (New Issues, 2002) (a chapbook was recently released through above/ground press); an earlier section of the new collection appeared as a chapbook under the project’s working-title, Boxer Rebellion (Bainbridge Island WA: g o n g, 2004). The “Boxer rebellion,” for those who don’t know (including myself), Wikipedia describes it thusly: “The Boxer Rebellion, Boxer Uprising or Yihequan Movement was a violent anti-foreign and anti-Christian uprising which took place in China towards the end of the Qing dynasty between 1899 and 1901. It was initiated by the Militia United in Righteousness (Yihetuan), known in English as the ‘Boxers,’ and was motivated by proto-nationalist sentiments and opposition to imperialist expansion and associated Christian missionary activity. An Eight-Nation Alliance invaded China to defeat the Boxers and took retribution.” In an interview conducted in 2013, posted at seventeen seconds: a journal of poetry and poetics, Mangold specifically discusses the chapbook, and more generally, the work-in-progress that ended up being Giraffes of Devotion:

SM: Rukeyser’s US 1 and Reznikoff's Testimony were very present as I started working with historical documents and an oral history transcript for my long poem Boxer Rebellion. They both use historical source texts with many voices and they both use documents that could have been filed away as bureaucratic documentation. George & Mary Oppen, Lorine Niedecker, Beverly Dahlen, Susan Howe, and of course John Ashbery were also instrumental in how I go about writing and thinking about writing.

rm: What was the process of composition for your chapbook, Boxer Rebellion? You mention a love for documentary poetics, and this short work is strongly influenced by very specific historical fact, yet I’m intrigued at how the work isn’t written out as straight documentary. It’s almost as though the facts themselves are broken down into language, and reshaped into the poem on that level. How do you manage to use real information without composing poems (like so many others have done) simply regurgitating story?

SM: Yes! That’s exactly what I tried to do—happy that comes through. Boxer Rebellion is a long poem about my great-grandmother’s life as a Navy wife in China during the early 1920s with her four children.  I had heard stories about moments in China from my grandmother and my mom throughout my childhood but I hadn’t heard the story laid out from start to finish within an historical context. The source text is an interview my great-grandmother gave to the US Naval Institute as part of their Navy wives oral history project, complete with index. The facts had such an emotional connection for me I decided the only way to start working with it was to break everything back into language, not a story, not history, not a family biography.  That’s how the alphabetical sections started—I retyped the index and did an alphabetic sort just to free up the language and it read like a condensed oral history, complete with stutters and repetitions. With the rest of the transcript I wrote down the phrases that caught my attention and used those as the building material for the poems. My first experiments started in 1998 and a few years later I had a chapbook together but I've also recently spent more time with the transcript to make the poem book-length so hopefully a new book will be in my future.

Mangold has engaged in the poem suite for some time, constructing chapbook-length, and now, book-length, manuscripts out of lyric fragments, and her Giraffes of Devotion follows this path, shaping and reshaping threads of family history and story into a documentary collage that opens into a series of foreign and long-forgotten histories. Her poems are wonderfully playful, utilizing the materials of language and story to create a series of delightful sound-fragments and poem-shapes, re-telling a series of seemingly-random stories in the voices (pauses, repetitions, warts and all) that once told her. There are moments I think the poems in this collection might serve as a series of monologues, for the sake of a staged performance of the entire text.