if the story like a river. loose and fretful, twine. if a story with debris and froth, pulling from the banks as it comes, never the same river twice, step in and be renewed. if glass-bottomed boats and red-dotted fishes. if another line just under the surface, if you can’t see without drowning, if sometimes in storm, sometimes becalmed. if each person carries her own boat, dam, leaf. cutting its own way through or swept along and over the cliff, story as waterfall and prismed light, story as gravity. 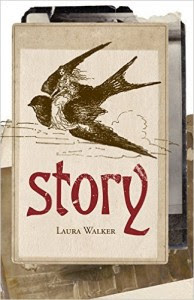 Berkeley, California poet Laura Walker’s [see her "12 or 20 questions" interview here] fifth poetry collection, following swarm lure (Battery Press, 2004), rimertown/ an atlas (University of California Press, 2008), bird book (Shearsman Books, 2011) and Follow-Haswed (Apogee Press, 2012) [see my review of such here] is story (Berkeley CA: Apogee Press, 2016). Composed as a sequence of stand-alone prose fragments, story provides an enormous amount of narrative detail, accumulating story upon story, thickening the length and breadth of it, but the thread of her story still manages to remain elusive. As she writes: “a story as skin. boundary, temperature, delineation. what she was told and what she was making fuzzy scratches in the dark.” Each of her prose poems encapsulate a sequence of small moments, extending the collection via accumulation, but one that refuses to remain static, or straightforward. “[T]o make a story move someone has to give,” she writes, as Walker engages with the mutability and contradictions inherent in storytelling. Just what kind of story is she attempting to tell?

she was seven. she was never seven. she stood on a small hill and looked behind her; she became her own character; she viewed the world through glass. the touch of sheets against her legs fades like vowels in ink, throb of a piano through a wall. a mattress as it sputters toward flame; desperate dogs down each man’s throat, eyes as big as branches. her eyes were glass where they could not see.

In an interview posted at Thermos on January 1, 2015, she discusses the project, still (then) very much a work-in-progress:

I’m in the last stages (I think) of a manuscript I’ve been working on for about a year. It’s a series of prose blocks circling around ideas of story and its manifestations, weaving characters, fairy tales, family stories, and memories, both “real” and created. Sometimes I say it’s as close to writing a novel as I’ll ever get, which is not very close. But there was something that felt “novelistic” for me as I wrote it, for example the ways in which I needed to erect a structure and simultaneously keep it aloft while turning my attention elsewhere—like putting up a circus tent and drawing something obscure and difficult on the floor at the same time. Destined for failure but exhilarating too.

In my mind it departs quite a bit from what I’ve written previously. And that’s part of what I’ve enjoyed about it—the fact that I don’t know what I’m doing, at all—the unfamiliarity. I’ve always been most comfortable with partial narrative, pieces of stories, multiple and shifting and overlapping—I have a huge distrust of anything that presents itself as complete, of beginnings and endings, of story arcs. So in this project I’ve had to write alongside my discomfort. Even though the stories here are still fragmented and incomplete, they’re central and substantive in a way that’s new for me. I’ve had to fight, hard, against my natural inclination to take things out, to subtract. Narrative here is, in some way, the point—not a hazy aura or shifting backdrop or ghostly presence—even though it’s still all those things, too, at least I hope. Anyway, it’s made me really uncomfortable, in a great way. I can feel myself having to reach toward new ways of holding things.

I was haunted by a lot of things while I wrote it. By my own experience of memory, especially of the way my memory now has gaps and holes since a concussion a few years ago, with new gaps being created all the time— and what that means for identity, “truth,” the communal, for creating something. By listening to my grandmother’s memories turn more and more gauzy over a period of years. By my visceral memories of fairy tales, what I took in and made my own, long ago, what I recreated, and perhaps why. By the idea of story as a character, with her own needs and trajectory. By my reading about recovered memories. By the idea of our body as a story we tell ourselves, and what that means for boundaries, transgression, injury. By narrative shape built through layer or repetition or eddies of water, vs. movement over ground and space—a finger rubbing the same circle repeatedly, eroding the surface.

Rob, thank you for this awesome review!