On A Hilltop, Near Drumbo

except
where hooves and heads 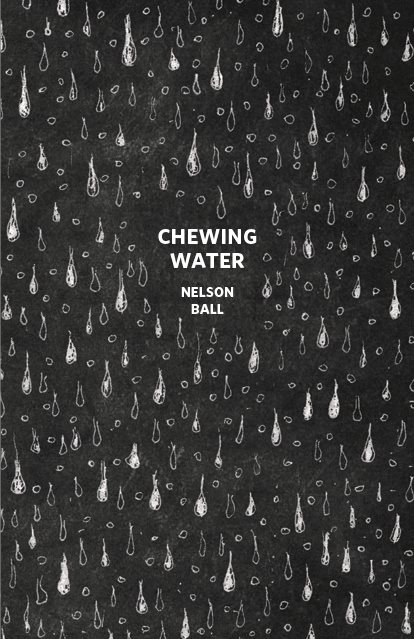 Paris, Ontario poet and bookseller Nelson Ball’s latest poetry collection is Chewing Water (Toronto ON: Mansfield Press, 2016), adding to the growing collection of books he’s produced over the two decades-plus since ending his extended silence (prior to that, he’d a flurry of 1960s and 70s publications), including With Issa: Poems 1964-1971 (ECW Press, 1991), Bird Tracks on Hard Snow (ECW Press, 1994), The Concrete Air (The Mercury Press, 1996), Almost Spring (The Mercury Press, 1999), At The Edge Of The Frog Pond (The Mercury Press, 2004) and In This Thin Rain (Toronto ON: Mansfield Press, 2012) [see my review of such here], as well as numerous smaller publications through Apt. 9 Press, BookThug, Curvd H&z, MindWare, fingerprinting inkoperated, Letters, Rubblestone Press, above/ground press, Laurel Reed Books and others [and: Nelson Ball fans take note: while posting this review I discovered that a Nelson Ball selected poems is due to appear next spring]. Ottawa poet, publisher and critic Cameron Anstee has referred to Ball as “Canada’s greatest practicing minimalist poet,” and Chewing Water continues Ball’s incredibly-packed poems on nature, close friends, reading and other intimate spaces, including his ongoing conversations with his late wife, the artist Barbara Caruso (1937-2009). Ball produces incredibly dense poems that one must briefly inhabit, requiring a close attention for even the smallest movements. Poems such as “The Dead” and “Ducks” showcase a minimalism that moves so easily, quickly and slow that it becomes difficult to breathe, lest the poem simply float apart. In his notes that end the collection, Ball adds: “My writing helps me cope with my loss. I still consult Barbara, aloud and frequently. She tells me to do things I know I should do but have been avoiding. She remains a vivid and wonderful presence inside my head, an addition to the legacy of her artworks and writings.”

where he writes poems about Tallahassee.
I remain in southwestern Ontario, where

occasionally it’s as cold as Ottawa,
and where I puzzle about Arizona,

in its great distance
from our cold and snow.

It’s irrational that we stay put.
My friend Catherine gives a reason:

our wild animals in this cool climate
don’t want to eat us, except bears

who mostly hide from us in the forest.
In South Carolina, alligators

roam the streets and lawns
and one has to be nice to them.