my father, at seventy-five (a report, 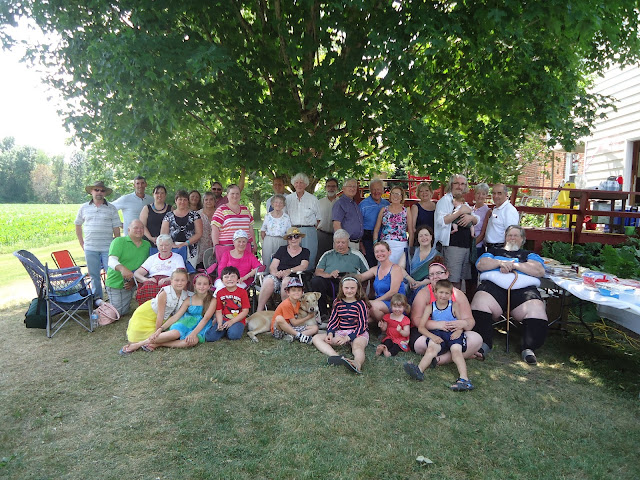 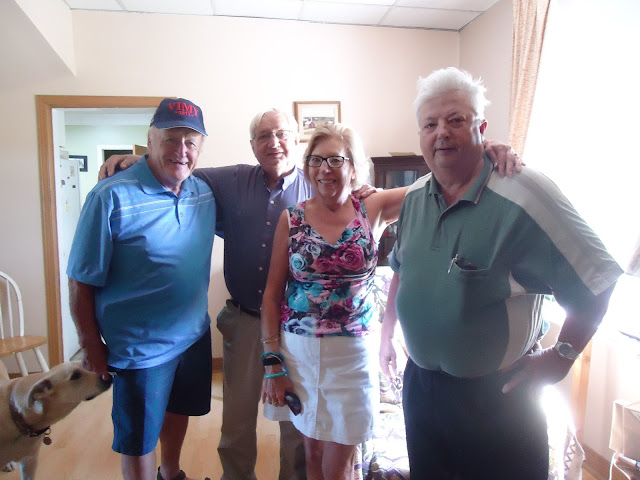 My father turned seventy-five years old on June 26 [left: Uncle Don, Kris Jensen, Aunt Pam + Dad], and my sister and I organized and hosted a surprise birthday party for him on the homestead. Originally, our plan included us descending upon the farmhouse on the morning of his birthday, once he was off to his usual Sunday morning church service. It was a good plan; it was a solid plan, but one thrown off slightly by the fact that his birthday coincided with the once-a-year multi-church service held not only an hour earlier at another location, but a service with a parking lot too far from the building, causing my father to decide to stay home, instead. Hmmmmmm. 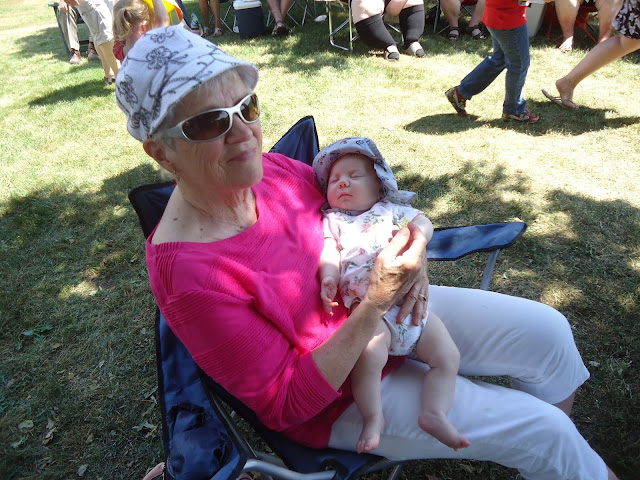 [Jule, with Aoife] Still, the day went along marvellously. We’d managed to secure an invitation to his best friend and former neighbour (when they were boys) Kris Jensen, who flew in from Vancouver Island and was already at the house having a visit when Christine and I arrived with the girls around 10:30am. Over the next hour or so, another thirty people arrived, from neighbours and other local friends to family from Ottawa, Arnprior and beyond, including two of his older cousins, Jule and Audrey (daughters of my great aunt Jessie), and my Aunt Pam and Uncle Don, in from Woodstock. Once we passed noon, a few others even arrived from the church service, such as the Rev. Jim Ferrier (whom we quite like). 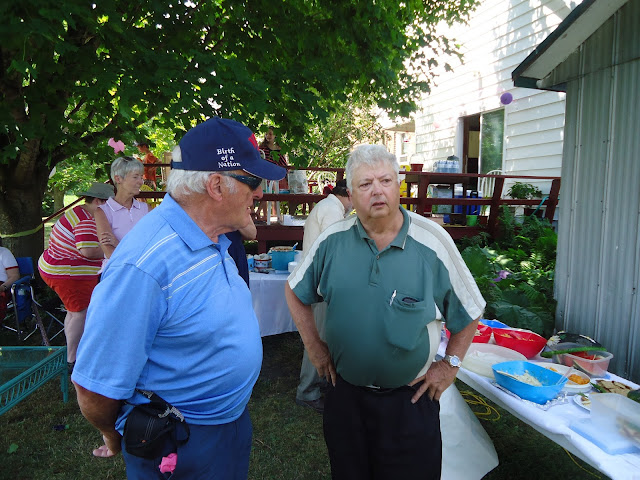 [Don and Dad] At 4:10am, on Sunday, June 26, 1941, our father was born in the log house across the road from the homestead, escorted by Doctor B.B. MacEwan and Nurse Edma MacEwan. There is a story I’ve been told about my grandfather, a day after my father was born, bellowing into the telephone at his sister-in-law, Harriet Campbell: “When are you coming over to see my son?”

My father was actually the second of my grandparents’ children, as Johnny and Ellen gave birth to a daughter some eighteen months earlier, who died less than a day later due to complications (something Audrey reminded me of, on the day, in case I didn’t know; a story she’d heard from her mother, saying “The only time she’d seen Johnny cry.”). It was my grandmother who initially informed me about her; by the time I’d any follow-up questions, she’d been gone for years. 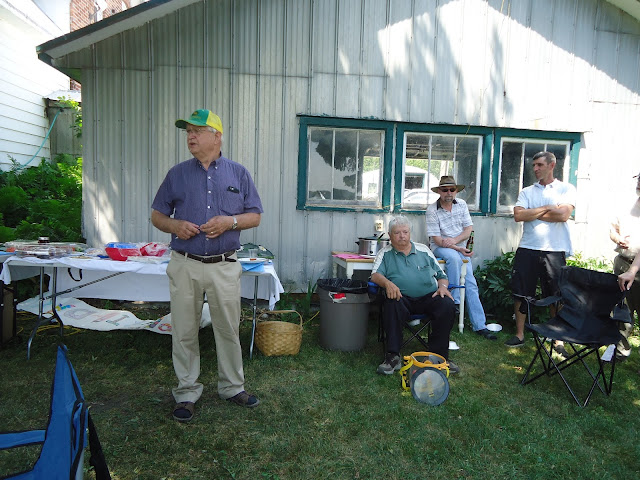 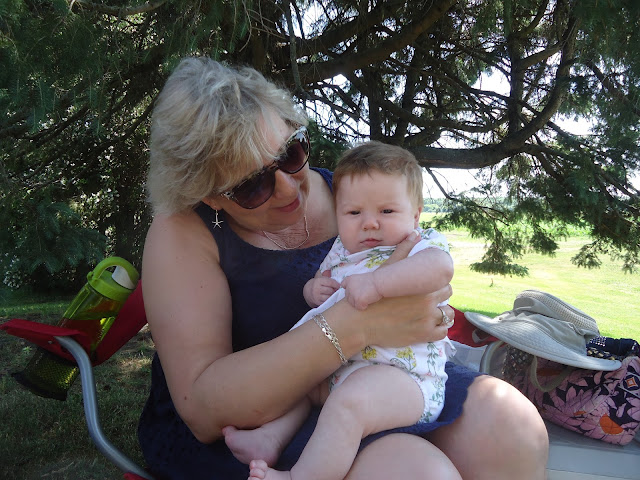 [above: Kris, speeching; left: my cousin Kim with Aoife] At seventy-five, he’s outlived a number of his father’s generation. His uncle Roddie died at sixty-six, Donald at fifty-seven and Johnny himself at sixty-two, either taken through cancer or the heart, both of which my father has survived. His mother might have lived to seventy-nine, his Uncle Scott to eighty-one and Aunt Belle to eighty-three, but Donald’s widow, Jesse, still holds the record, managing a matter of weeks away from one hundred and six.

My father has quietly lived here since he was roughly a year old, as he and my grandparents moved from where my sister now lives to the farm, a stretch of land originally granted to us back in 1845. 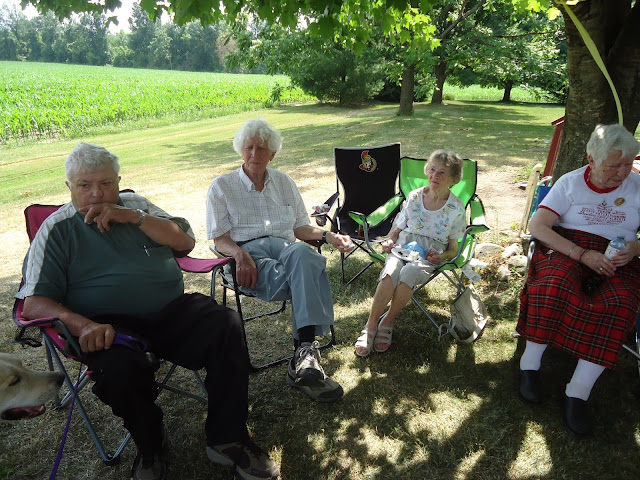 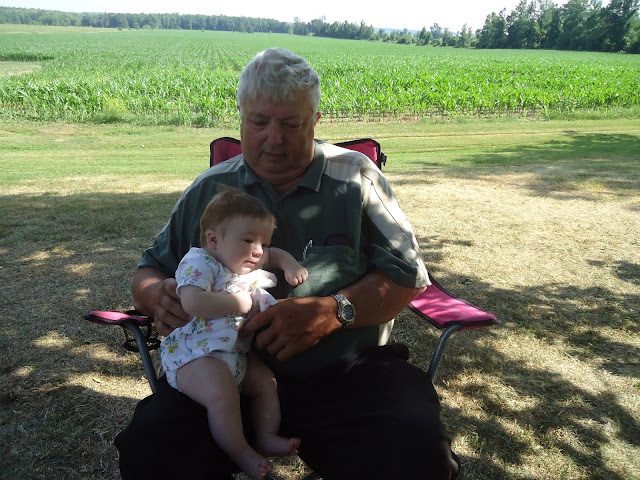 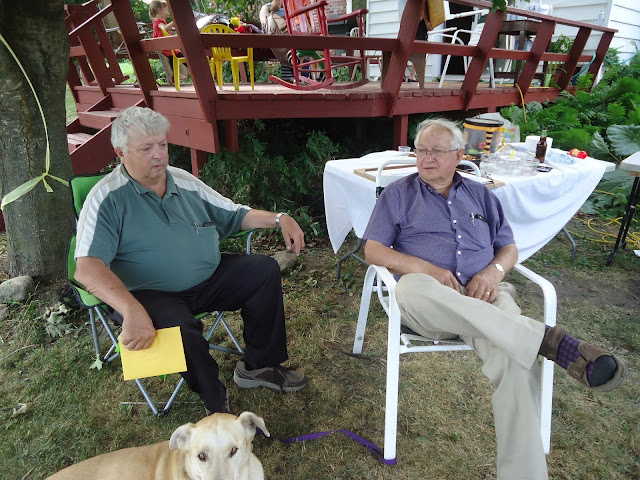 The day was grand. I couldn’t get any photos of Rose, given she spent the entire day running (with a myriad of cousins), and about a third of the people there took turns holding the baby. My eldest niece, Emma, unfortunately, was home sick, and couldn’t participate; neither could my eldest daughter, Kate, caught up at work (inventory was non-optional, she was told).

There were even speeches. More than a couple of folk spoke, including Kris and Aunt Pam, and I inarticulately fumbled my way through something-or-other (bah). My sister, at least, managed a good little speech about how dad is apparently awesome (I had no idea!). What was interesting in some of the short speeches was in the number of friends and neighbours (including Kris, as well as some more recent neighbours) who spoke to my father’s generosity: how he was always the first to help when you needed, sometimes even before you knew you needed help. Kris spoke of how good Dad was to his own parents, after he’d moved off the farm next door. He was the first to welcome another couple, who’d only moved in a few years back, also. It is always good to see someone appreciated for so many years of humble kindness, generosity and simple, essential work. The best neighbour anyone could have, someone said.

And of course, he got up and said a few words as well; a bit awkward, and rather shell-shocked, I think, from the entire day.

I have so enjoyed reading your blog this am. Wish I could have been there. Some of the folks in the pictures I know very well. Your dad, Chris and I were in the same class in high school. I have not seen Chris since and would not know him from his picture. He was known as Jens Jensen in those days. Your grandparents, Ellen and John were wonderful people. John had a fine tenor singing voice and he and Bert Renfrew sang at many of the community events. He also was a convincing Sunday Schoolteacher and youth leader and of course church Elder as is your father. Your grandmother hosted our youth group many times in that very same farm home. I have many fond memories of those days of my youth in Glengary and especially my connections to St. Elmo and Maxville. You can believe that every good thing that was said about your father is true. Thanks for the memories!!

That 'someone who said' was me! You're father is the loveliest of gentlemen and we were so happy to be included in the festivities! -Kim Little