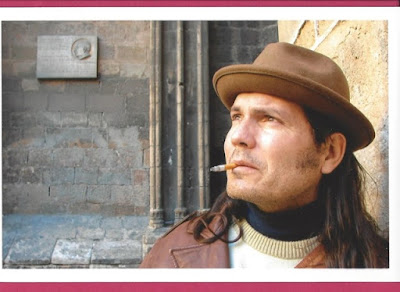 Randy Lundy is a member of the Barren Lands (Cree) First Nation, Brochet, MB. Born Thompson, in northern Manitoba, he has lived most of his life in Saskatchewan. He grew up near Hudson Bay, SK, just a stone’s throw from the confluence of the Fir, Etamomi, and Red Deer Rivers.

He completed a B.A. (Hons.) and an M.A. in English at the University of Saskatchewan, where he studied religion, philosophy, and Indigenous literatures, completing a thesis on the plays of Tomson Highway.

He has published two books of poetry, Under the Night Sun and Gift of the Hawk. 2016 will see the publication of a third books of poems, Blackbird Song.

His poetry has been widely anthologised, including in the seminal texts Native Poetry in Canada: A Contemporary Anthology and An Anthology of Canadian Native Literature in English. His poetry has appeared in anthologies in the United States, New Zealand, and Australia.

He has also published scholarly articles on writing and on the work of Tomson Highway and Daniel David Moses.

Randy writes short stories and is currently working on a manuscript, Certainties, for publication.

1 - How did your first book change your life? How does your most recent work compare to your previous? How does it feel different?
Well, my first book, Under the Night Sun, probably only inflated my ego. But it did offer me the opportunity to teach creative writing, which has been a great blessing to me. Some amazing students who have taught me more than I ever knew about writing. It's something I have been doing now since 2000. You know, when the book came out, I thought the writing was amazing. Now (and that was in 1999), I look back at it and see that there are only a couple of decent poems. I am glad for those decent poems, but I guess I have just matured a bit. I hope.

I did some bad things in Saskatoon when I was going to university, just silly young man things, and I fell in and out of love and all that stuff is in that book.

Under the Night Sun and Gift of the Hawk are composed of lyric poems. I know that's unfashionable these days, but it's what I can do. Blackbird Song will be more of the same. My first teachers were the critters both in and around where I grew up. Those and the trees and stones and rivers etc. After those teachers, it was Archibald Lampman's nature sonnets and then later Patrick Lane, Atwood, Cohen, and the whole crew.

In the midst of editing the first book, Patrick suggested I was a bit of a romantic, and of course he was right. Still am, always will be.

2 - How did you come to poetry first, as opposed to, say, fiction or non-fiction?
Good question. Well, I understand how the long sentences one can construct in prose might be seen to represent a river or a ridge, I used to sit on the rocks in the middle of the Red Deer river and listen to the water running. To me, it sounded full of syllables, but short, tumbling. The bird calls were not prose but poems.

I guess I am still trying to imitate that as best I can.

3 - How long does it take to start any particular writing project? Does your writing initially come quickly, or is it a slow process? Do first drafts appear looking close to their final shape, or does your work come out of copious notes?
Writing is not a project me. It’s just how I live. So I don’t ever stop writing, in my head that is. Getting it down on paper is always hard, and then comes the endless process of revision. That’s tough business. Luckily for me, if not for the reader, generally the first drafts are fairly close to the final version.

But that’s an oversimplification. First drafts are carried inside my bones before they ever become first drafts. Everything else gets thrown away.

4 - Where does a poem usually begin for you? Are you an author of short pieces that end up combining into a larger project, or are you working on a "book" from the very beginning?
Poems always begin with an image that I have to find the idea to express. Or it’s the idea I have to find an image to express. The two are constantly united, melded.

I am definitely a writer of shorter pieces (at least for now) that combine into something I could not anticipate. I know the use of the term ‘organic’ is way to overused, but the work does figure itself out. Then you just have to look and listen.

5 - Are public readings part of or counter to your creative process? Are you the sort of writer who enjoys doing readings?
I love reading to people. And I love being read to. Reminds me of childhood. And I guess like many I like being the center of attention and having eyes on me.

Then again, that’s not what it’s about. To refer to Patrick Lane again: “It’s the poem that matters.” So if readings keep me from writing or make me forget why I am doing it, then that’s a problem.

6 - Do you have any theoretical concerns behind your writing? What kinds of questions are you trying to answer with your work? What do you even think the current questions are?
Theoretical concerns. Well, I have a problem with post-structuralist / post-modern theories that would have it that language is about language and never reaches the world. I think it’s malarkey. The same world, the same earth, that gave birth to us gave birth to our various languages. Language is a marriage between human consciousness and the world.

Of course, I am Cree (not to the exclusion of my paternal ancestors) and I am interested in the earth and all of its various creatures because they are truly our kin.

So for me, I am interested in how we are formed by the world. We’re just a part of it, looking from inside it. If that doesn’t point us toward current questions, then we are in deep trouble, as we seem to be.

7 – What do you see the current role of the writer being in larger culture? Does s/he even have one? What do you think the role of the writer should be?
Well, we are certainly not “the unacknowledged legislators of the world,” as Shelley put it in his defense of poetry. I think our roles as writers should be to engage people in dialogue.

I do not really feel qualified to answer the question, but I am certain that writers have a role. Maybe many would disagree.

8 - Do you find the process of working with an outside editor difficult or essential (or both)?
Working with an editor is definitely difficult and essential. For my first two books I was lucky to work with Patrick Lane and Daniel David Moses, and I learned much from each of them. Different things, but I learned much. Important to get out of our own heads, I suppose.

9 - What is the best piece of advice you've heard (not necessarily given to you directly)?
This is turning into a Pat Lane tribute, but the poem is what matters so just get your own ass out of the way. Look and listen. Another of my favourite poets, Jane Hirshfield, has a chapter in her book Nine Gates titled “The World Is Large and Full of Noises,” so just shut up dummy and listen.

And I guess I have to credit the Buddha for letting me know to just be where you are.

10 - What kind of writing routine do you tend to keep, or do you even have one? How does a typical day (for you) begin?
I don’t really have a writing routine, except I walk and look and listen and see what is offered to me. A typical day begins with a cigarette, coffee, getting the dogs fed and watered, and then rushing off to teach. The dogs are good people. They have taught me much about what it means to be human.

11 - When your writing gets stalled, where do you turn or return for (for lack of a better word) inspiration?
Inspiration. Well, of course, one of the meanings is to breathe in, rather than expire. So I turn to the birds—the merlins and doves and hawks. Also, I turn to writers I respect: Louise Gluck, Joanna Klink from UMontana, and especially Charles Wright. I cannot even get through a single Charles Wright poem without having to sit down and write. Mostly I just steal from him.

12 - What fragrance reminds you of home?
Hmm, well, the smell of freshly baked bread in my Irish grandmother’s kitchen. My Irish kohkum, Reta, always was and is my home. And the smell of garbage in the burning barrel at my aunt and uncle’s farm north of Hudson Bay. Old Spice aftershave on my father.

And the “fragrance” of the bush in the spring.

13 - David W. McFadden once said that books come from books, but are there any other forms that influence your work, whether nature, music, science or visual art?
Nature I’ve said enough about. I’m starting to sound like a pagan. Guess I must be one.

Music? Don’t get me started. I like hand drum music, Delta blues, outlaw country, to name a few favourites. Science and visual art I understand are indispensable, but I don’t really understand those disciplines. The kinds of music I enjoy celebrate the rhythms of the natural world and humans and human bodies as part of that.

14 - What other writers or writings are important for your work, or simply your life outside of your work?
I’ve already been name dropping here, so I’ll try to keep this brief and mention a few folks I haven’t already. There are a great many damned fine Indigenous writers I would be remiss not to name: Maria Campbell, Louise Halfe, Gregory Scofield, Armand Ruffo, Linda Hogan (whose book The Book of Medicines should be required reading for poets), Sherwin Bitsui.

Recently bumped into a small book by Elena Johnson, Field Notes for the Alpine Tundra, which is a really special book.

Probably I should stop there before I get carried away.

15 - What would you like to do that you haven't yet done?
Climb Macchu Picchu, visit the Deer Park where Buddha had his enlightenment under the Bodhi Tree, have dinner with Pablo Neruda and Jean-Paul Sartre—none of which are likely to happen.

16 - If you could pick any other occupation to attempt, what would it be? Or, alternately, what do you think you would have ended up doing had you not been a writer?
Any other occupation? Stand-up comedian, graffiti artist, whitikow, or Professional Trickster.

Maybe this sounds silly, bit I feel like writing and teaching are vocations for me. Just what I should be doing.

17 - What made you write, as opposed to doing something else?
Oh heck, I think I just answered that. Nothing else I wanted to do.

19 - What are you currently working on?
Well, new manuscript of poetry trying to explore the connections between Indigenous sensibilities, Buddhism, and the nature of memory.

That and some short stories, which I am just fooling around with because for me it’s a new genre and I don’t feel like I should know what I am doing in the same way I put myself under pressure when trying to write a poem.