You keep your cities
in the water. In the wood

stand islands and clearings.
You are running

with the jewel box by water.
Your dreams

provide the key. Your ocean
awaits. It waters your dreams.

the boat. Wake up. Eat
this shattering pastry,

A girl, a plan, a canal:
Vienna (Melissa Ginsburg) 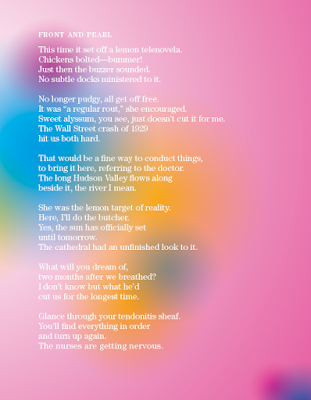 I’m always gratified to see the new issue of Fence magazine. The latest issue of the semi-annual poetry and fiction journal Fence is issue #30 (Winter/Spring 2015), and has so much writing in it that poems are included on the front and back cover, and the author biographies are only available through either scanning the code through your phone or writing the journal directly (which I understand, logically, but simply find annoying as a reader). Either way, it is remarkable to see a journal inventive enough to include the two poems by John Ashbery on their front and back cover instead of inside the issue, thus solving the frustration of lack of space. I really can’t think of another journal that has done such, although I know that the text of the late Vancouver poet Gerry Gilbert’s Moby Jane (Toronto ON: Coach House Press, 1987; Coach House Books, 2004) [see my review of such here] was constructed (and produced) to begin on the front cover, and end on the back cover.

One thing I’ve always appreciated about Fence is their adherence to publishing the work of any writer only once over a two year period; coupled with their strong editorial mandate, this has meant that one of Fence’s ongoing strengths is the ability to introduce even their long-standing readers to a wide variety of new writers. Some of what leapt out at me included the unapologetically open-heart cadences of Tina Brown Celona’s three poems (“now to sing / so that even you // will stop to listen / in the moonlight // we walk in / I’ve never seen such whiteness // where poetry is the only language / and the only speech we hear”), or the striking staccato of Wong May’s three poems, that include:

How could I cross you
The only way you would go?

You shall take my hand
& I will close my eyes,   assisted
Or assisting
We shall step   —   like so,
Into the traffic.
Thank Heaven,
You are not blind. (“Cold Heaven”)

And have you read Mary Flanagan? Oh my:

The fur of gorilla is as misunderstood
As a mistaken desire

The palms that are gorilla palms
Are not of fire

The woman standing near the gorilla
Is there by accident

The stairs behind and above do not
Enable gorilla transcendence

Scratches made by the nails
Mark the rolling wine barrel

As usual, there is far too much to discuss in detail, but the new issue includes some familiar names included as well, including Chris Martin, Carla Harryman, Bin Ramke, Joshua Ware, Seth Abramson, Andrea Actis, Ben Doller, Maureen Seaton, Jeff Hilson (I haven’t seen work from Hilson in quite a long time) and Rick Moody, as well as an extended section of Julie Carr’s remarkable “REAL LIFE: AN INSTALLATION” (a work-in-progress she discussed last year at Touch the Donkey), that includes:

Consider for a moment images of the divine, and the ban placed upon them. Since in what I’ll call my tradition there are no such images we depend entirely on language and the body. This means there are many songs, many prayers, some rocking, and much ritual. Children are at once glad and annoyed by this. If we were to construct an image, what would it be? A mother? A goat? A tree? Impossibly, we’d have to have all three, which would return us to something that precedes us, throw us back to fathers who never once knew we were truly theirs and so fed us reluctantly, counting our morsels. Everything we’ve forgotten how to do, any ritual unpracticed or unknown, remains like a residue on the table. Stroking the wood, we retrieve these forgotten things.