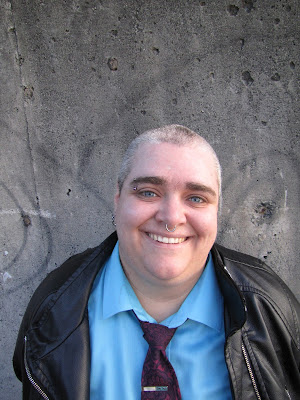 Lucas Crawford is from rural Nova Scotia and is based in Vancouver. Crawford's poetry has been published widely, including in The Literary Review of Canada, The Antigonish Review, Room, PRISM International, and Best Canadian Poetry (2015). Crawford is the R.W.W. Junior Chair of Gender,Sexuality, and Women's Studies at Simon Fraser University. Sideshow Concessions is Crawford's first poetry book, and it won the 2015 Robert Kroetsch Award for Innovative Poetry. Transgender Architectonics (2015) is Crawford's book of scholarly essays.

1 - How did your first book change your life? How does your most recent work compare to your previous? How does it feel different?
My first book, Sideshow Concessions, has just been out for a week, so I’ll have a better answer for this next year perhaps. At this point, I can say that the process has helped me reconnect with people and places from my past. It has also brought me a measure of calm, the kind you feel when you have been trying to say something for awhile and finally say it. Even though I’ll be reading these poems publically for awhile yet, I think publishing the book is giving me some release from them. The stuff in the book isn’t just mine anymore. Feels nice (and weird).

2 - How did you come to poetry first, as opposed to, say, fiction or non-fiction?
I don’t have an answer, although I’d say that I have remained with poetry (for the most part) because of its ambiguous relationship to story and character. I think I find continuity and progression – as we normally conceive of them – to be constraints.

3 - How long does it take to start any particular writing project? Does your writing initially come quickly, or is it a slow process? Do first drafts appear looking close to their final shape, or does your work come out of copious notes?
I’m not necessarily recommending it, but I write intermittently and rapidly, and the first drafts are usually very close to the final shape. I like to put an idea on the backburner of my mind and let it simmer away for ages. Sometimes an idea needs to find its life in poetry, but just as it often it enters the classroom, or a friendly conversation, or just falls away. Writing is simply a part of my process of thinking and living, not its own “end.”

That said, I am experimenting with a more regular writing habit right now, with prose. I am learning about the different kind of energy and regular practice required to write prose with continuity of plot and character. It’s been fascinating and fun, though I think my mind is more satisfied by the freedom of shorter texts that build a discontinuous narrative through accumulation. I think this is because I wish we were more able to see and enjoy our discontinuities. Poetry can be fleeting relief to the pull of all of those long-term narratives of self that get attached to us, perhaps.

4 - Where does a poem usually begin for you? Are you an author of short pieces that end up combining into a larger project, or are you working on a "book" from the very beginning?
Sideshow Concessions was not originally conceived of as a book. I took my whole youthful portfolio and put it in a single document. Then I started writing things that I felt could complement or replace existing pieces. Almost all of the original poems were eventually cut, one by one. Since then, I have been conceiving of things as books, yes. (A poetry book about New York’s High Line Park is forthcoming.) That said, I want pieces to stand on their own, and in the moment of writing, I’m just thinking of that one piece. As for where poems begin, I could never nail it down.

5 - Are public readings part of or counter to your creative process? Are you the sort of writer who enjoys doing readings?
For many years, I considered readings and performances my main practice and only very rarely did I send anything out. I wrote for readings with particular audiences in mind. These days, readings are a fun part of the process that lets me reflect on what I’d like to share, where, and why. They are important to me because I appreciate the extra chance to connect with an audience and to animate the work in ways that make it “new” to me again.

6 - Do you have any theoretical concerns behind your writing? What kinds of questions are you trying to answer with your work? What do you even think the current questions are?
My overarching questions are: what is a body? How do bodies exceed the form of the human self? How can visceral patterns or habits be broken? How does pain leave the body? How is memory material? How do we situate our bodies in spaces – architecturally, domestically, geographically – and to what effect?

7 – What do you see the current role of the writer being in larger culture? Does s/he even have one? What do you think the role of the writer should be?
I struggle with this, because it’s great to see writers fulsomely engaged in public discourse, but I also want writers to be able to do so without the pressure to be ultra-utilitarian and realistic at all times. Taking the long view, I think of literature as being the cutting-edge think-tank of culture. To me, it’s where novelty often occurs. (Then, a hundred years later, a highly simplistic and neutralized version of the novel idea seems to be ‘discovered’ by someone in a culturally-valued profession. I suppose I hope for writers who can help us all see that this is often the case – and that reading is therefore very worthwhile!) Another reason I struggle with this question is that while I am excited to help create “visibility” for trans lit, I also wish allies could transfer some of the emphasis on trans author-selves or celebrities into reading trans lit (not to mention rethinking gender in one’s own work and life). What matters most to me is what an author writes. It is already a form of public speech. And the pressure we put on trans authors to be hyper-public and verbose – to be heroic, even – just might not suit all trans authors’ needs.

8 - Do you find the process of working with an outside editor difficult or essential (or both)?
I find it easy with the right editor, and I’ve been very lucky in that department. Leigh Nash at Invisible Publishing had great ideas and keen insight into the book as a whole. That said, I once had an editor change every mention of “working class” to “working man.” That one hurt when I saw it in print, as did another editor’s inscrutable interpretation of FTM (Female to Male) as “Female Transgendered Man.” Basically, if an editor knows how to use Google and be a person, I will get along with them famously and thank them forever. Thanks Leigh Nash!

9 - What is the best piece of advice you've heard (not necessarily given to you directly)?
These are paraphrases.

Don’t even try to get published; just focus on filling up your rejections folder. (Marco Katz Montiel)

Read your draft, take the best line, and make it the first line in your second draft. (Jeanette Lynes)

WOOF!!! (What my best friend says to motivate me when I’m being pessimistic about life – the meaning is something like, “c’mon, ya big beast!”)

10 - How easy has it been for you to move between genres (poetry to critical prose)? What do you see as the appeal?
Writing scholarly texts is a different animal. Part of the appeal of that genre is reaching a different audience; knowing that students are reading your ideas is rewarding. I also think it is very important to have places where highly complex and non-practical ideas are encouraged, which often requires complex conversations. Don’t get me wrong – there are many drawbacks to academic publishing because the peer review system is inherently conservative, or perhaps preservative. For my forthcoming academic book, I have been lucky to work with the great Meredith Jones and Neil Jordan at Ashgate. (It is called Transgender Architectonics, due out late 2015.) I have written my second poetry book as a public / differently accessible version of the ideas found therein.

11 - What kind of writing routine do you tend to keep, or do you even have one? How does a typical day (for you) begin?
N/A, but I’m working on it. My day always begin with breakfast, including a truly colossal smoothie.

12 - When your writing gets stalled, where do you turn or return for (for lack of a better word) inspiration?
I’m with Junot Diaz on this one: the best way for me to be a writer is to try to live a big and thoughtful life, exposed to tons of ideas and people – not to scramble around looking for a muse and treating writing as an ultimate and forced goal. I imagine writers as people who have lived in such a way as to have things that they absolutely must communicate. If and when that urgency isn’t there, I’d rather do something else! Like watch food television, walk around Vancouver, make ugly crafts, or do some work.

13 - What fragrance reminds you of home?
There is a scent at CB: I Hate Perfume (a small amazingly gay Brooklyn perfumery) called Gathering Apples. It has the mackintosh apples, splinter-thin wooden fruit baskets, and (somehow) the crisp air of my home village of Kingston in the Annapolis Valley of Nova Scotia. But I would also name the smells of white pudding (https://en.wikipedia.org/wiki/White_pudding) and the sea as home-smells. As for my current home in Vancouver, I’m not sure – although when I recently arrived home from a trip, the cloud of pot smoke that marked my entrance into the west end was sort of undeniable, haha!

14 - David W. McFadden once said that books come from books, but are there any other forms that influence your work, whether nature, music, science or visual art?
Popular culture, food, and architecture.

15 - What other writers or writings are important for your work, or simply your life outside of your work?
Queer and transgender literature broadly defined; modernist novels; contemporary novelists like Junot Diaz, Paul Auster, Zadie Smith, and Jeanette Winterson (rolling eyes for the fat-phobic parts); food-writing; etc.

16 - What would you like to do that you haven't yet done?
Work as a researcher and writer for the El Bulli Foundation in Spain.

17 - If you could pick any other occupation to attempt, what would it be? Or, alternately, what do you think you would have ended up doing had you not been a writer?
Food-writer. Still a writer, I guess? Musician or chef then.

18 - What made you write, as opposed to doing something else?
Personal desire.

19 - What was the last great book you read? What was the last great film?
I just read a book called 97 Orchard, an impeccable public history of five immigrant families who each lived in a tenement at 97 Orchard Street in Manhattan. It’s the story of the five families as told through their foodways. My tastes in films are lowbrow. Spy is a recent comedy that was very well done, I thought. Long live Melissa McCarthy. Relatedly, I thoroughly enjoyed Dina del Bucchia and Daniel Zomparelli’s new book Rom Com last week.

20 - What are you currently working on?
I am working on some prose about food and Nova Scotia but it’s too early to say much. I’m editing my second poetry book, the one about the High Line Park. I am working on other poems now and then, and on an academic book about the emotional habits of slenderness.