THE END OF TELEVISION

Covet not the sun its honorarium
nor authorize the stars their grants to write.

The sojourners spotted a forest
adrift with language, but couldn’t make sense of it.

didn’t look like pyramids, no matter the scale.
Read this part as if the sum of lilac

mattered to you. For love of someone
*else’s vortex, toss the luminaries aside.

In lieu of flowers, please donate
and in exchange for your sympathy I’ll give you

edits on the level of the line. Poems are to war
as are ghosts to the proverbial orchard.

Headstones offer us nothing
but an end to syntax. Microsoft

Word inverts the sea. I read
your manuscript. Reader, I married it.

I fear for the estuaries.
They are so small this time of year. 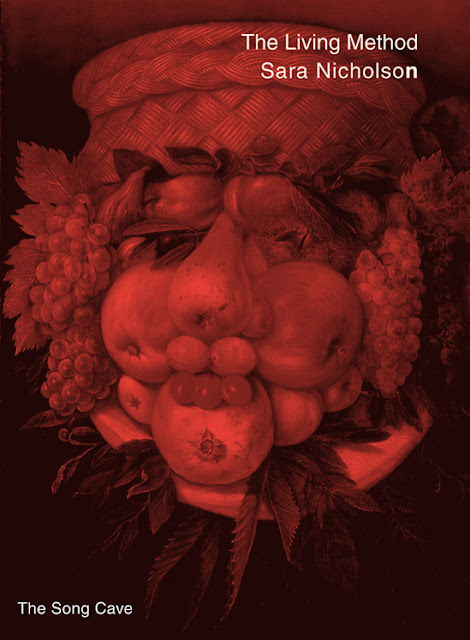 I’m admittedly a bit late to the game on Arkansas poet Sara Nicholson’s first poetry book, The Living Method (New York NY: The Song Cave, 2014). A collection of sharp, stunning lyrics, Nicholson’s poems shift and shimmy through what is known and not known, seen and not seen, shifting perspectives from line to line, writing a meditative abstract through a sequence of direct phrases. Her poems somehow contain multitudes in a unique precision of condensed space and revel in a quick movement between ideas, images and facts. There is such a powerful certainty that comes through such shifts, rolling across the page like a thunderstorm. There is a ferocity that comes through here, as well as a fierce intelligence as she articulates a sequence of moments that describe a state of being. As she writes in the poem “O.E.D.”: “I hate you and I hate / the art of these letters, this language.”

Our skin, beyond recognition
makes music in the blood.

the numbers that have become ugly
this semester. I might get lost

though my blood won’t. My eyes’ll
drop their verdict in the leaves.

Methodologies and flowers, little documents
with wings, leave their lesions in the dust.

The lyric is something greater than forest
and less than skin. Those that I have loved now sleep

within the quotient of our breathing.
Nothing will have the wherewithal

to sound me out. Not the wind,
complex among the poplars this season.

Not the occasional email,
reminding us of what’s missing:

a field of poppies and a book review,
a really good one. Not the wolves.

Posted by rob mclennan at 8:31 AM
Labels: Sara Nicholson, The Song Cave