than live in fear of rejection. Things I know:
car sickness, the Mall of America, all-night

murder dreams. Childhood was a joke.
Slinging imaginary rifles over my shoulder,

falling out of trees for negative attention.
Now I talk to you like I have nothing

to lose, no grip whatsoever. I sneak into
the neighbor’s basement just to be the criminal.

I call you in the middle of the night to say
I’m not a ghost yet. It’s funny because

in Chicago I have a real brother but what
a boring story. Things I don’t know:

Nothing I say will make you love me
and there’s real honor in that.

The author of two poetry chapbooks, Massachusetts poet Anne Cecelia Holmes’ first trade collection is The Jitters (Grand Rapids MI: Horse Less Press, 2015). Built as a collection of compact lyrics, the poems in The Jitters are fearless, vulnerable and razor-sharp. These poems revel in even the smallest miracles, attempt to comprehend the darkness, and take no shit from anyone. As she writes to open the poem “WORLD’S TINEST EARTHQUAKE,” “I’d like to say what’s been said / and say it better. Break // accountability exactly open. / When faced with an ultimatum // I choose the most destructive force, / haul everyone onto the lawn just // to get tough. Please trust me.” These are poems born of a quick, dry wit, composed as a series of observations, critiques and direct statements that take no prisoners. “When nothing changes I finally love myself,” she writes, in the poem “MEMORY BRICKS.”

All of this hurts the facial expression.
I’m sick of watching you fall over
the television like you’re the one
inside it, and more than ever
I feel like a tugboat in that scene.
Don’t blame me for your
bad cartography. I can’t be
an acrobat because
my heart isn’t ripe.
You said this trampoline
makes you dream of chairs
but to me the backyard
is a butcher shop.
Bring me a bag of rocks
and I’ll carpet you in them.
I’m going to be
an admiral in all this. 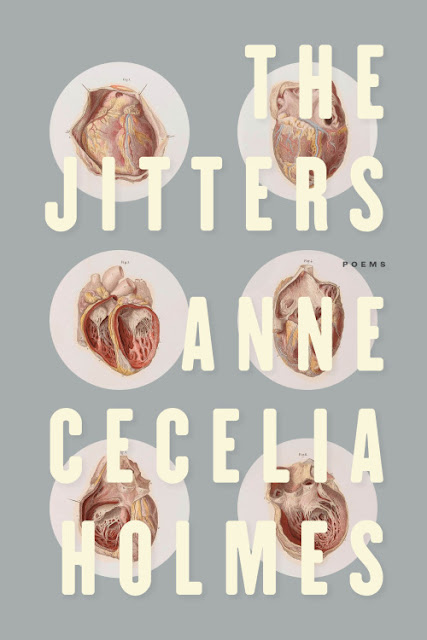 I’ve been increasingly aware over the past few years of a particular strain of American poetry: poets, predominantly female poets, composing very striking lyric poems that combine savage wit, subversion, distraction and use of the straight phrase, blending lightness against dark subject matter. If I were to attempt any kind of list of examples, it would include Matthea Harvey, Natalie Lyalin, Dorothea Lasky, Amy Lawless, Sommer Browning, Emily Pettit, Bianca Stone, Hailey Higdon, Emily Kendal Frey, Anne Boyer and the late Hillary Gravendyk, and now, Anne Cecilia Holmes. What connects the writers on this list is the way they each compose tight lyric bursts that slightly unsettle, managing to utilize both light and dark humour, and push to shake at the core of expectation, discomfort and the otherwise-unspoken. There is something about how each of these authors, including Holmes, have embraced elements of the confessional mode through a compact lyric that can be used to voice flashes of anger, annoyance, frustrations, loneliness and violence, and even conversations on evil, as Holmes writes in the final poem in the collection:

POEM FOR WHAT I’M NOT ALLOWED

Ode to the murderer I imagine
in every band of trees. To
my blood cells, to well-ordered systems,
to my head absolutely thick
with disease. Ode to the dress I slept in
and wore the next day, to the cilantro
I planted in all the wrong weather.
Ode to the fucking cosmos. Ode to my face
against your face, to poems that want to
like us but don’t. Ode to being
the bloodless one, the neurotic one,
the one ignoring your spiritual journey.
To your clothes in my basement
covered in ink. To I wore this when
we first met, to I want to hurt you like this
and then like this. Ode to quitting my job
to stay excited, to exposing myself
to my neighbors, to embedding so many
rocks in my chest. Ode to Tulsa.
Ode to the 900-foot Jesus, to keeping
my hands in my pockets most of the time.
To my brothers and sisters, to all my
enemies, to imagining every way
to die in every possible scenario.
Ode to crying when I can’t find my shoes,
to feeling like god will punish me for
sins I don’t believe in. Ode to taking
pictures in front of strangers’ houses.
Ode to my jacket covered in yellow.
Ode to how I wish you were built
out of wood panels. Ode to staring
out the window in the worst
of the house. Ode to your age,
to my age, to how I react improperly
when reenacting your fate. Ode to
so few phenomenons. Ode to
absolving myself of everything.
To singing what I’m doing, to arguing
what counts as “artifact” and “alive.”
Ode to my wandering pacemaker.
Ode to my big fat heart. Ode to
pretending I’ve never been where
I used to live. Ode to hoping you’re
a goner. Ode to grieving nothing
each time a villain is born.