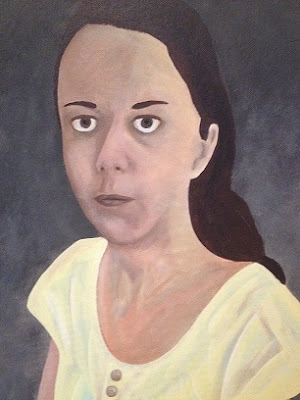 Sara Nicholson is the author of The Living Method (The Song Cave, 2014).  She lives in Arkansas.

1 - How did your first book change your life? How does your most recent work compare to your previous? How does it feel different?
It didn’t really change my life at all. I’m an adjunct and a TA and still am.  I still live in Arkansas.  I still have the same friends and husband and cats.  But in terms of that other world (poetry), which is not the world I live in but is a world I live around or among in some way, it’s changed a lot. My readership used to be about 5 people. Now maybe it’s closer to 20 or 30 (rough estimate).  I’ve met some new people because I’ve had a book, and this has been nice. I’m very thankful to have a book on such a great press.

My recent work feels different to me. It feels more personal and discursive. And angrier. And more philosophic.  And more prosodic. And longer. My second book will be published by The Song Cave in 2017.  I’m excited to share it with you.

2 - How did you come to poetry first, as opposed to, say, fiction or non-fiction?
When I was in college, my friend Meg Ronan told me she was taking a summer class on Writing Poetry and that I should write some poems and apply and take the class too.  I thought this would be better than living with my parents, which it was. I wrote some (very bad) poems, applied, was accepted, and lived with Meg that summer. We shared a bedroom, played Uno together, and slept on adjacent inflatable air mattresses.  I became somewhat addicted to writing poems, and haven’t stopped yet.

3 - How long does it take to start any particular writing project? Does your writing initially come quickly, or is it a slow process? Do first drafts appear looking close to their final shape, or does your work come out of copious notes?
I don’t work in projects; I write poems. Sometimes the writing of poems happens quickly, sometimes not.  In my experience, this has little to do with how much free time I have.  One summer, I wrote hundreds of poems.  This past summer, I wrote five or six.  Lately, I’ve been writing lines and lines and lines and then one morning (I always write in the morning) something clicks and I write the poem.  Then I start all over again.  It feels like daily tragedy until I have a few dozen poems, at which point I feel accomplished and mature. I imagine I’ll continue this way for awhile.

4 - Where does a poem usually begin for you? Are you an author of short pieces that end up combining into a larger project, or are you working on a "book" from the very beginning?
I’m always writing poems and eventually some of those poems will end up in a book together.  The poems in one book relate to each other in that 1. I wrote them and 2. I wrote them around the same time when I had the same obsessions, eccentricities, tendencies, failures, desires.

5 - Are public readings part of or counter to your creative process? Are you the sort of writer who enjoys doing readings?
I like doing readings because they allow me to meet other poets and to practice, in public, the art of being intoxicated, flippant, and strange.

6 - Do you have any theoretical concerns behind your writing? What kinds of questions are you trying to answer with your work? What do you even think the current questions are?
Women, the wilderness, email, love as free labor, marriage, the sun.

8 - Do you find the process of working with an outside editor difficult or essential (or both)?
Essential.  In terms of my first book, I went through a few drafts with my official editors (Ben Estes and Alan Felsenthal).  My husband, Christopher Violet Eaton, read through it more times than I could possibly remember. My newest manuscript got some important edits from him and from a friend, Jane Gregory.  These are all people I trust.  As of right now, I’ll write poems and keep them secret and at inopportune moments send them to friends, expecting nothing in return.  And I hope they’ll do the same for me.

10 - What kind of writing routine do you tend to keep, or do you even have one? How does a typical day (for you) begin?
I usually wake up (early) and write until about noon.  Sometimes by “writing” I mean reading, walking around in my garden, petting my cats, or staring at my computer screen.  I can’t write at night, though I admire people who do.

11 - When your writing gets stalled, where do you turn or return for (for lack of a better word) inspiration?
Sometimes, when I feel stuck, I read poems I’ve written recently over and over again until I have them memorized and can then figure out how they work and why. Sometimes, I read.

13 - David W. McFadden once said that books come from books, but are there any other forms that influence your work, whether nature, music, science or visual art?
https://www.youtube.com/watch?v=s2WywwxWbvY

14 - What other writers or writings are important for your work, or simply your life outside of your work?
Some writers who have been important to me: Mary Butts, Kamau Brathwaite, Sylvia Townsend Warner, Laura Riding, Baron Corvo, Attar, Quevedo, Rosemary Tonks, Anna Kavan, Chaucer, Jane Bowles.  Everything before 1900.  I like moral literature (Epictetus, Pessoa).

15 - What would you like to do that you haven't yet done?
Travel.

16 - If you could pick any other occupation to attempt, what would it be? Or, alternately, what do you think you would have ended up doing had you not been a writer?
I’d like to attempt being a gentleman of independent means. This would involve me honing my courage, enough so that I could face a life of absolutely no consequence.  I’d like to paint porcelain, receive notes.  I don’t like being an adjunct.  I think I was born for the fox hunt.

17 - What made you write, as opposed to doing something else?
Misfortune.

I haven’t watched a movie in a long time.  I like watching baseball with my husband and Game of Thrones with Cody-Rose Clevidence.

19 - What are you currently working on?
Poems. I’ve also been writing short stories.  Right now, I’m working on a story called “Herr Sigismund” about a prisoner who escapes by mailing pieces of himself via USPS, and a story called “Rabbinical” about a girl named Sally and her cat, Walter Map, who licks his unmentionables a lot.