CONVERSATION WITH THE STONE WIFE

Nothing interests me anymore. A garden is too enthusiastic
to be alive for its own sake. The highway, now that is something.
I want to be paved into colorless stone. Because you don’t
believe me anymore and you’ve lodged with too many sisters,
am I correct in saying the engines of trucks sound arcane,
that you love the unbelievable smoke of winners? Define desire:
when have I ever made isolation difficult, it is my primary vocative
as when cars pedal their blood-speed down the interstate.
They bend as you, swerve around struck geese as you word
your desires. Define for me a body. I guess as its opposite: crows lift
heavily from powerlines at the scattergun of a flabby man,
everywhere the smell of ersatz semen from dogwoods. Bereft.
These hours spin, are the aspirin dust of every horse gallop.
I’ve ceased my worries of being fathomed. I am stone. Sex.
No need for coddling, no need for linear paths of diction.
In the parade, I am a distant cousin’s milktooth rattling
a mason jar. Someday the man with his gun will lift his legs
into a fabulous pair of corduroys. That sound will be a caw,
not the soundtrack of desiccated desert bones. But the highway:
crowded buses move the forsythia with definitive violence
in a way I know means I will never know touch. How cruel
to be so heavenly a body without body, the charge and wail
of skin and the city and distance. Last winter the life of a batter
could poison the oceans forever—how could I tire of this?
Since then the Arctic seas have warmed. Disasters loom
with smug portending. I want to be opened, for someone’s gaze
on my fissures. To be smelled for the ice age inside me. 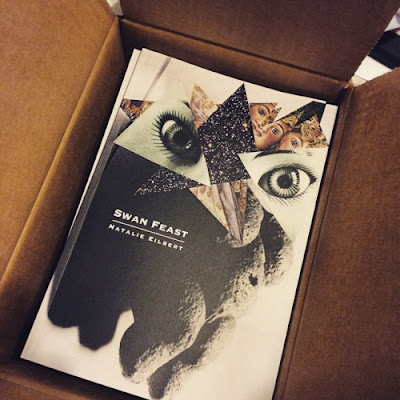 I’ve been curious about poet and editor Natalie Eilbert’s first full-length poetry collection, the expansive Swan Feast (Atlanta GA: Coconut Books, 2015), a book, as Julie Carr writes on the back cover, composed as “a twenty-first century hymn to the Venus of Wilendorf, a 30,000-year-old figuring whose ample body is a protest against all that seeks to diminish us.” Swan Feast is set as a conversation with, and attempting to voice, the Venus of Willendorf, “one of the earliest images of the body made by humankind.” According to Wikipedia (another source of information sits here): “The Venus of Willendorf, now known in academia as the Woman of Willendorf, is a 11.1-centimetre (4.4 in) high statuette of a female figure estimated to have been made between about 28,000 and 25,000 BCE.” Through the collection, Eilbert explores and works to articulate a connection between herself and this lost, ancient goddess through conversations on privilege, empire, and gender and cultural violence, occasionally wrapped up in information that may or may not be biographical. This book is, as Carr writes, written as protest, and pushing to be heard, yet the poems in this collection are incredibly intimate, self-questioning and self-aware, focusing her gaze as much on the self as on anything else, as she writes in “WE WATCH AS IF WAITING FOR THE ARTIFACT TO OPEN HER EYES.”: “I am pregnant / with another myth’s god, you know.” Hers are poems that channels rage, frustration and an autobiography of a “fallen goddess,” attempting to speak to and through the image of the ancient stone woman. In the first of her two poems titled “THE DEATH AND LIFE OF THE VENUS CITY,” Eilbert shows how she allows herself such permission to speak for and through the goddess/statue:

What will amount to our kingdoms, our Willendorf in the sand.
Can I speak for the Venus, alien object, the way one walks
over seeds buried loose in the snow, can I speak for her
the way a grave-good decorates a ritual, the way styrofoam brims
laughably in the municipal trash. I will speak for her as I spoke
for myself as a girl behind her bedroom door. When I found her
she was marked in Grandpa Leo’s anthology an ugly thing to watch:
in her image the hands still combed her form, a log against nothing.

Swan Feast is structured in eight sections-as-mirror-image, from the central point of the third section, “CONVERSATION WITH THE STONE WIFE,” rippling out to untitled second and fourth sections of shorter lyrics, to first and fifth longer, more expansive sections titled “THE DEATH AND LIFE OF THE VENUS CITY,” to a final section constructed as a single poem, bookending alongside the opening poem, “With Queen of Willendorf” (why the final poem is considered a section, while the opening poem is not seems a minor question of structure). The shorter poems, which themselves are long-lined and stretch down the length and breadth of the page, are powerful, but pale in comparison to the rush of sentences that make up the first of her two “THE DEATH AND LIFE OF THE VENUS CITY” poems. The piece is vibrant, and occasionally overwhelms, containing some fantastic lines, enough to stop any reader dead in their tracks, from “The city sun sets every day now like Muybridge’s horse, suffering time.” to “Discovery renders / archaeologists sole creators of their artifacts, just as man is sole creator / of man.” Through Natalie Eilbert, this is very much a feast, enough that it often requires portioning, and yet, the effect of the rush appears deliberate: she wants you to be overwhelmed. Through conversation, Eilbert’s collection exists as a study on a variety of violences against women, and a call for action against such violence. This is a powerful book, and one that requires a great deal of attention. Later in the collection, one of the most striking poems has to be “SUPPLICATION WITH THE VENUS FIGURINE,” that includes: “It’s true I’ve stared at my breasts long enough // in the bathtub until their fatty geographies // become something other than what they are.” The poem opens:

The rupture of our little red lives, V.
Should I name blames when I say the sun

when it hits the floorboards right here

pushes a lonesome into the tip of my finger,

pushes my mother off a ledge so she is the city

I worship with $4 coffees. I’m late again
and will cancel the therapy I need to not starve

and feel good about starving because lately

your gut is a ballast. My navel smiles deeply
in the folds as I round my back for rabbit’s pose.