Eileen Myles, I Must Be Living Twice: New and Selected Poems

It’s something like returning to
sanity but returning
to something I have
never known like
a passionate leaf
turning green
August almost gone
“—that’s my name,
don’t wear it out.”
As if I doffed
my hat & found
a head or
had an idea
that was always
mine
but just came
home, the balloons
are going by so
fast. I lean on
buttons accidentally
jam the works
when I simply
am this
green. 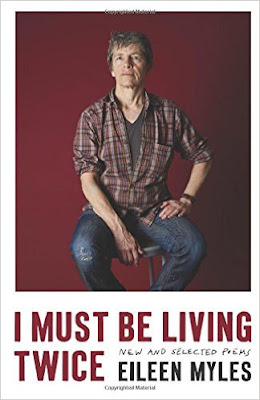 With the publication of I Must Be Living Twice: New and Selected Poems 1975-2014 (Ecco, 2015), as well as the reissue of her 1994 novel, Chelsea Girls (Ecco, 2015), New York poet Eileen Myles is enjoying a bit of a renaissance lately. Not that she’s been silent for any extended stretch, having published “nineteen books of poetry, criticism, and fiction,” but, as she says to headline a recent interview in New Republic: “I’m the Weird Poet the Mainstream Is Starting to Accept.” Basically, Myles is a writer that other writers have known about for decades, finally, as the stories suggest, moving into a larger and broader readership. Much of Myles’ work explores the line between fiction and memoir, utilizing elements of personal detail, in varying degrees of alteration. Often more straightforward, and sometimes deceptively so, her poems engage with elements of narrative, the lyric, performance, meditation, social and political commentary, the confessional and the short story, all of which she presents as “the poem.” When reading through this collection, I can see very much how some of these poems would have fit perfectly being performed at the late lamented CBGBs, where her first readings were held in the 1970s. As the New Republic interview informs us: “Eileen Myles seems to come from a New York that no longer exists. Her first reading took place at CBGBs, she lived four floors below Blondie, and contemporaries with Richard Hell, progenitor of the spiky-haired, torn-suit jacket look.” That might all read as a tad romantic, and even sensational, but hers has been a New York also populated by Ted Berrigan, Alice Notley, Kathy Acker, Chris Kraus, John Ashbery and Charles Bernstein, among so many, many others. A recent interview over at Electric Lit (an interview worth reading in its entirety), explores her frustrations with accessibility and readability, the limitations of form, and the limitations of naming form:

Before I was really writing I lived in Cambridge with friends after college. One day I went to Dunkin’ Donuts for a cup of coffee and the guy next to me just turned and started unloading his mind completely. There was no civilized introduction, no nothing. He was completely crazy but what was really astonishing was how seamless it was. I try to kind of do that. The most interesting moment in The Bell Jar is when they take the famous poet out to lunch and he sits there quietly eating the salad with his fingers. The narrator concludes that if you act like it’s perfectly normal you can do almost anything. John Ashbery said he writes as if he’s in the same room as the person who’s reading the poem. For example, if I wanted to describe…well that wainscoting I’d just begin right there: “I’m not sure how i feel but the black next to it is actually really great.” What it creates is a feeling of intimacy, if a reader will go with it. A lot of fiction makes narrators that just happily give it up! They show all the scenery, the whole plodding entrance. I’d call them “obedient narrators”. I don’t ever want to write an obedient narrator. I want you to have an actual relationship with the narrator.

This is only the second title I’ve seen of hers, after the more recent Snowflake: new poems / different streets: newer poems (Seattle WA/New York NY: Wave Poetry, 2012) [see my review of such here], but the poems in I Must Be Living Twice: New and Selected Poems allow the reader the possibility of seeing across four decades of her published poetry. Bookending the collection with “New Poems” and an “Epilogue,” the collection includes selections from The Irony on the Leash (1978), A Fresh Young Voice from the Plains (1981), Sappho’s Boat (1982), Not Me (1991), Maxfield Parrish (1995), School of Fish (1997), Skies (2001), On My Way (2001), Sorry, Tree (2007) and Snowflake / Different Streets (2012). What is curious is in seeing how the precision and rush of the pieces in the “New Poems” section are comparable to poems throughout her published work; Myles’ work has evolved, and honed over the decades, but the precision, energy and rush of her lyric, and the subtle shifts of tone and tenor of her lines, remains throughout. She knew what she was doing very early; she knew what she was doing, and pushed the boundaries while keeping her writing centred around an essential core of her narrative/meditative lyric.

out in a bus stop
among the
mountains
a yawn, boy drive by
blue mountains
little tan mountain
house, similar
each scape
is all its own place
no woman
is like any
other

Still: given the heft of such a collection, at nearly four hundred pages, why not include an introduction? (I don’t understand any selected/collected poems that doesn’t include an introduction.) She does, at least, include a short essay-as-epilogue, an essay that works through considerations of narrative, genre and form; an essay that opens with her poem “What Tree Am I Waiting” and poet Dana Ward, who caught sight of it in the online journal Maggy, and offered praise:

His explanation of why my poem was important to him was like balm to my ears. He wrote:

To hear someone arrive with that purpose & then put it right there, getting out of the way of everything else to get it right to the top of the thought & the poem. That’s the best stuff in the world to me, that sound. It seems harder than ever to do, or I’m confused right now somehow, regardless, it just tolled in the room for me.

This was huge praise from someone whose work I currently adore. I was pee-shy too about my own poem in particular because it was too emotional. How will it be received. Dana did refer to his own piece in Maggy as “a poem” which intrigued me cause it looked like prose. It’s prose in a world in which I’ve never really noticed whether people describe Bernadette Mayer’s influential early works “Moving” and “Memory” as poetry or prose. Didn’t she call it writing. I mean I think even for Lydia Davis genre is like gender in the poetry world. I’m remembering Amber Hollibaugh explaining gender this way once. It’s not what you’re doing, it’s who you think you are when you’re doing what you’re doing. So prose writers in the poetry world always felt less like prose writers to us, more like fellow travellers and someone like Bernadette was probably writing poems that looked like prose, or like Lydia, prose in the poetry world which for a while at least adds up to the same thing. She was a fellow traveller for a time, and still is, truly, though she’s also everyone’s now. John Ashbery’s greatest book I think is Three Poems which certainly looks like prose. So if Dana Ward wants to call his prosey looking stuff a poem it probably has more to do with how he feels about the work. Or whose he thinks it is. When I read it, it’s mine for sure.