The rebellion is now a thing
of the past, it is now a page

When a few generations shall come and
go our sad story of the Frog Lake
Massacre may be totally forgotten and
the actors therein consigned to
oblivion, but, these few papers, should
they by any chance survive the hand of
time will tell to the children of the
future Canada what those of your day
experienced and suffered and when
those who are yet to be learn the extent
of the troubles undergone and the
sacrifices made by those of the present
to set them examples worthy of
imitation and models fit for their
practice to build up for them a great
and solid nation they may perhaps
reflect with pride upon the history of
their country its struggles dangers
tempests and calms in those days I
trust and pray that Canada may be the
realization of that glowing picture of a
grand nation drawn by a Canadian poet 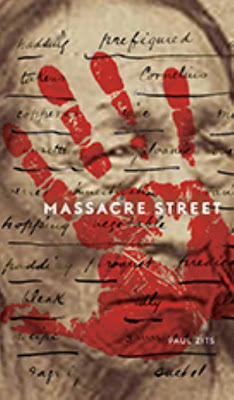 Towards the end of Calgary poet and small press publisher Paul Zits’ first trade poetry collection, Massacre Street (Edmonton AB: University of Alberta Press, 2013), he includes the poem “The rebellion is now a thing / of the past, it is now a page,” centring the collection precisely there, at the beginning. Zits composes his Massacre Street to recreate “a poetic view of the Frog Lake Massacre of April 2, 1885,” structured from the influence of various perspectives on the Canadian historical prairie poem. Zits is working very clearly in a tradition that includes work by Robert Kroetsch, Monty Reid, Aritha Van Herk, Jon Paul Fiorentino and Dennis Cooley, each of whom managed to reenergize both history and the form of “documentary poetics.” An unfortunate result of “documentary poetics,” in Canadian writing at least, is that too many poets have composed poetry collections that merely replicate information on historical and/or literary figures and/or events without adding much of anything, whether to the documentary information or poetic structure. I won’t mention names or titles, but the offenders are many. Zits, on the other hand, seemingly takes as his models the poetics of both Kroetsch and Cooley, falling somewhere between the lyric questioning, tall tales and the perpetual return to the beginning of Robert Kroetsch, and the collage-quilt of storytelling of Dennis Cooley, most notably in his own historical prairie poem, Bloody Jack (Winnipeg MB: Turnstone Press, 1984). The book is constantly moving, searching, interrupting and questioning everything that is being presented, resulting in an unsettled book on an unfinished question, and one that attempts not to assign blame, but attempt to discover the correct questions.

without giving expression to sentiments of sorrow

It was in a circle
and a space in the centre being kept for dancing
and the rabbit in the pot boiling, it was all there, head, eyes, feet
and everything together
and Little Poplar was arrayed in some of Miss McLean’s ribbons, ties
and shawls
and another with my hat tumbling over the bank
and another with Mrs.. Delaney’s
and the squaws with our dresses
and before the sun went down they wrapped blankets around her
as if, coming down, she would eat the whole camp up

a sea of green interspersed with beautiful flowers and plants
as in the echo after every bomb, charm lying in its wake
it glided along the large rivers and lakes and desired rest
carrying white flags, fishing and waving white flags
or perhaps the pages of a blood and thunder novel
I breathed in the echo of every bomb, a prairie charm delusion
except perhaps when viewed from the deck of a steamer

Massacre Street is a large, complex and critical document on a messy and complicated period of Canadian history, a history that, in many ways, Canada is still working to comprehend, and come to terms with. The poems, too, are attempting to find out what happened. Through the poems of Massacre Street, Zits adds a polyphonic and critical gaze, refusing a single point of view but exploring many, and can be read as a poetic sibling to Myrna Kostash’s Frog Lake Reader (Edmonton AB: NeWest Press, 2009), or cousin to Margaret Sweatman’s novel, When Alice Lay Down with Peter (Knopf, 2002). Through exhaustive research and a large curiosity, Zits manages to bring the material a new kind of life. Had only history been written so well before.