Jessica Hiemstra, Self-Portrait Without a Bicycle


Rachel insisted Keira Jo be swaddled, not clothed.
She’s not a doll, she said. And besides
there are rituals reserved for mothers. The gentle
first tug of naked arms through cotton, white socks
on new feet. She didn’t want her daughter dressed
the first time by a mortician, lovingly or by rote. It was,
Rachel said, the most terrifying moment of my life—
preparing to hold her dead girl, a pixie,
she said, perfect. When I stooped over the box

Keira Jo was wearing a yellow toque, swaddled
in white, an almost-child. Small red face, perfect
lips. Plutarch, in Moralia, wrote not to be born is best
of all, and death better than life, but the wisdom
of Silenus is stilled by one small mouth at the breast,
a tiny heart—that sparrow, Rachel’s thumb
clutched by a small pink hand, any flutter
however small. (“A bowl of strawberries in an empty room”) 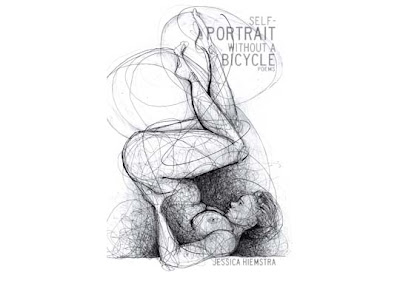 I don’t normally favour lyric poetry so overtly narrative, but there is something about the lyric of
Jessica Hiemstra’s second trade poetry collection, Self-Portrait Without a Bicycle (Emeryville ON: Biblioasis, 2012), that immediately takes hold. Given that she is also a working visual artist (her sketches adorn both cover and inside the collection), there is something of the rough sketch to some of these poems, deceptively rough but finely hewn, shockingly precise in quick, quiet lines. The collection is made up of a series of meditative poems that focus on smallness, from matters of the domestic to language to matters-of-fact, such as the poem “Well, the cat’s dead,” that opens with “I wasn’t fond of her but one dandelion in a jar / is pretty.”

Every so often, there might be a line that rankles, such as “I felt my skin grow taut.” in the otherwise strong poem “I told my first stranger I was pregnant,” but these near-cliché lines appear to be the exception, and not the rule. With references to the art of Alex Colville, Yann Martel, grandparents and children, these are poems grounded in the immediate world, open and completely bare, following the essential lines of quiet. Composed with such clarity and soft humour, what might a writer such as Jessica Hiemstra do, perhaps, with fiction? I would worry it might read too straight, as so much other contemporary fiction, but I would read a fiction that writes as these poems do, slipping in and around a directness more direct than confession.

and we took him home, tattered and torn. A librarian
had taken scissors to him, removed the nakedness,
left the guns. Mom gathered up the loose pages,
carefully taped the women back in. Violence, she said
against love. I didn’t know what she meant. Truth
lies in juxtaposition. Painting occurs, Alex says,
when I think of two disparate elements. That night
I opened Tragic Landscape on my lap and got lost
in the folds of cow beyond the soldier, still grazing,
as though death had taken nothing. I knew the man
was dead, but I searched the painting for a sign he was

sleeping. Later that year I was censored too, my Mrs. Milling,
who took my drawing of Adam and Eve and hid it
in her desk. She said I had made them too naked. Nakedness
makes us afraid. Imagine my mother hadn’t
stitched up the book, imagine just Pacific and Bodies
in a Grave, Belsen. I spent the evening thinking
about guns, women in bathtubs, artists at war. What makes
something indecent is not skin but scissors.
This morning I tried to buy The Art of Alex Colville,
but it was too expensive. Tomorrow I’ll try eBay,
perhaps someone doesn’t know what it’s worth.