the porch lights up
bats return to the barn

moon my companion
on the road
heading home 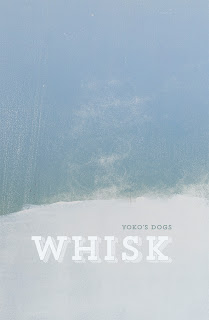 I’m always intrigued by the notion of the poetic collaboration. When it’s done well, it manages to highlight a way of writing not individually possible by any of the writers involved. This new small collection, Whisk (St. John’s NF: Pedlar Press, 2013) is composed by “Yoko’s Dogs,” a writing group founded in 2006 by the Canadian poets Jan Conn, Mary di Michele, Susan Gillis and Jane Munro, each of whom have been producing their own individual works for some time. Given that the four of them might share the same writing space and space on the page, the narrative disconnect is one that anyone might expect, and their own individual more narrative works blend together into a form that might be seen as akin to the North American ghazal, or even the English forms of the haiku. In these poems, the four-become-one seem to favour highlighting narrative smallness, extending the small moments of the English-language haiku, and the tangentical leaps of the ghazal. Through these moments, the finest of the poems shine through, but when the lines attempt to connect too much on the narrative level is when the pieces break apart.

wren at the window
I move, it’s gone

the girl practices trumpet –
coyotes
in the canola

rain is my shower
I share a bed with field mice

Why fight to artificially connect what might be entirely impossible? It’s as though the collaborative fifth that is emerging from the mix is one that distrusts the narrative impulse, and yet, the group hasn’t yet learned to trust that voice, and their own intuition, instead fighting against the very thing they are attempting to create. The strength of the poems in this collection come through the disconnection itself, four voices merging into one, and through this, the best of the poems come. The tension between their own individual voices and that of the collaborative fifth is compelling, but that tension doesn’t necessarily make the best poems. Instead, it highlights the fact that this is a collaboration-in-progress, yet something that reads as far more lively than similar works by Pain-Not-Bread. The book reads as an interesting experiment, and one they should certainly further, but perhaps an idea that hasn’t quite solidified.

NOT AVERSE TO FLOWERING

the rambling rose
is not averse to flowering
among yellow leaves

misses the rabbit on the second try
that bobcat